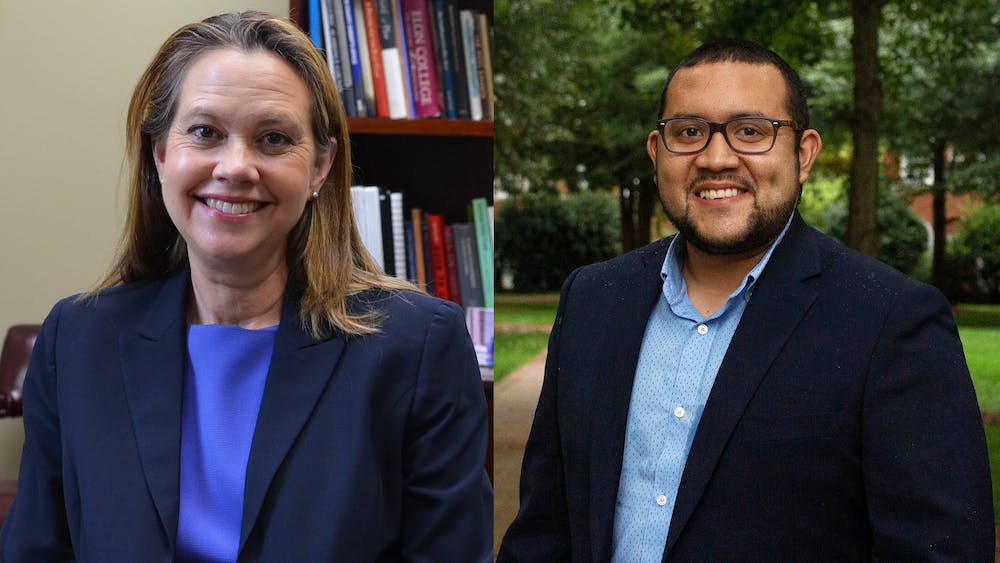 The event was sponsored by the Kernodle Center for Civic Life, Elon Votes!, the Elon Political Engagement Work Group and the Council on Civic Engagement. It was hosted by Elon students sophomore Trevor Molin and sophomore Will Gardner, who asked the two panelists questions to facilitate the discussion.

The panelists began by giving an overview of their lives. Galey, who grew up in Alamance County and went to college at The University of North Carolina at Chapel Hill, used to be the chair of the Alamance County Board of Commissioners. Prior to that, she also was a staff attorney at the Defender Corporation of Charleston County, South Carolina.

Hurtado grew up in rural North Carolina and also attended UNC Chapel Hill. His parents immigrated to the United States from El Salvador. He became the first Latino democratic candidate elected to North Carolina state house in the 2020 election. In addition to his current role as a state representative, Hurtado works at UNC Chapel Hill, where he is an instructor.

Galey and Hurtado discussed how the COVID-19 pandemic has altered their experience in Raleigh.

“I've heard a lot that there's not nearly as many people around here as there are usually,” Galey said. “ People are working at home, with a lot more Zoom and virtual type meetings.”

Hurtado said while the workflow is constant, it has been a different experience.

“We're just as busy, but the number of people that you see on any given day is different,” Hurtado said. “There isn't just a free flowing traffic that there used to be.”

The coronavirus has also affected how members of the general assembly get to know each other, according to Hurtado.

“So much of our work is based on our relationship, and it's hard to get to know folks,” he said. “As well as wearing a face mask, I didn't realize how much a smile impacted a conversation.”

Galey and Hurtado then gave advice to attendees who wanted to get into politics.

“I certainly encourage y'all to be doing that because your expertise, in terms of communication, the work that you're doing, the issues that you're passionate about, all really helped drive our campaigns,” Hurtado said. “That energy is so critical to so much of what we're doing in Alamance County.”

The event was sponsored by the Kernodle Center for Civic Life, Elon Votes!, the Elon Political Engagement Work Group and the Council on Civic Engagement. It was hosted by Elon students Junior Trevor Molin and Sophomore Will Gardner, who asked the two panelists questions to facilitate the discussion.

For the final question of the night, Galey and Hurtado answered a question from President Connie Book. She asked about what each of the panelists wanted to accomplish for the county while they are in office.

“One thing that I am specifically working on has got to do with education appropriations,” Galey said. ”Alamance Community College needs lab equipment to furnish the biotechnology center of excellence. It’s $4 million and I have been working on getting that.”

Hurtado discussed his work with increasing diversity in teachers in his district’s school systems.

“Something I'm very much passionate about is around teacher recruitment and teacher diversity in particular and how we begin to recruit a teaching workforce that is reflective of the lived experiences of our students,” Hurtado said. “A lot of data shows us that our students perform better when they have that connection to close that gap, in terms of the lived experience of the teacher and student and how they work together.”

This panel is the first of two virtual events in the Active Citizen Series. The next one is scheduled for March 24, which will feature the town of Elon Alderwoman Emily Sharpe and Alderman Monti Allison.