A program meant to discuss issues surrounding systemic racism, raises concern for some students of color 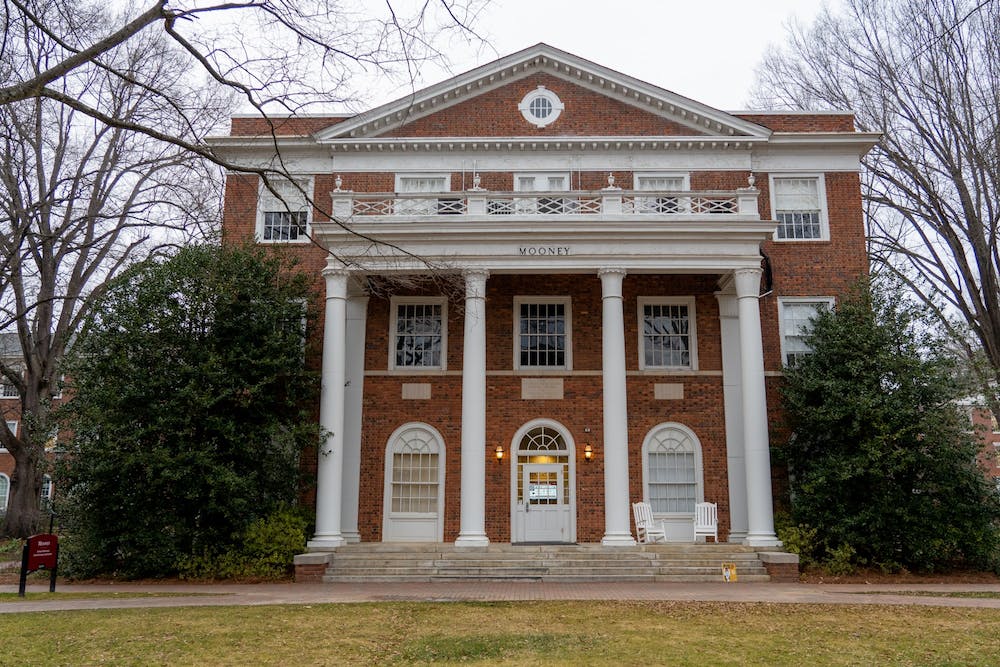 
Mooney, the building housing Elon's School of Education, on Feb. 10.

Elon University’s School of Education planned to host, for the second semester in a row, a “white caucus” for “white-identifying” education majors or minors. As of Feb. 10, the program has been canceled. The program, which had the goal to explore race and systemic oppression in education, comes after a summer of protests against racial injustice.

“White caucuses allow white-identifying allies to have these conversations in a way that does not burden or re-traumatize people of color,” an email sent about the program to School of Education students Tuesday reads. “White caucusing is one part of a lifelong and multifaceted commitment to antiracism for white-identifying people who are passionate about racial justice, and who want to begin taking concrete and direct action.”

Students looking to participate in the program are required to fill out a Google form where they are asked to adhere to a confidentiality agreement, which states “by signing up, participants agree to leave what is said in the caucus meetings within those meetings, and to not share anything outside of the group for any reason.”

Randy Williams, chief diversity officer and vice president for inclusive excellence, said he was made aware of the white caucus on Feb. 9, and while he understands the intentions, he said the program does not align with the university’s policies.

When asked for comment on the “white caucus” university communications directed all questions on the matter to Williams.

School of Education students were made aware of the program at least one other time in an email dated Sept. 11, 2020, from Dean Ann Bullock.

In the email addressed to students, Bullock said the program was created “as part of the School of Education’s  diversity, equity, inclusion initiatives.” Students were invited to participate in nine weeks of 75 minute “white caucuses” with Associate Professor of Education Scott Morrison.

Bullock described the “white caucus” as somewhat new and cited a 2019 article written by Alex Vlasic, a white writer who focuses on the areas of social and racial justice. She currently serves as a teaching assistant for the UNtraining White Liberal Racism program in New England.

Bullock did not respond to Elon News Network’s request for comment. When asked by university communications to schedule an interview with Bullock, a university spokesman said that Williams would address all communications on the program.

“One of the most helpful tools when first approaching the roots of racism is caucusing,” the article said. “In this case, to caucus means to meet in separate identity groups—so you may have a white caucus and a PoC caucus, and depending on the group, people of mixed race might want their own caucus.” The article goes on to explain the benefits of hosting white caucuses.

“In forming a white caucus, we are relating to the realities of racism and the harm that it causes, rather than assuming or hoping that we can jump directly into interracial healing,” the article said.

Williams said he understands the intentions of the students involved in the caucus to start conversations addressing racism, he said that “missteps” can occur in the process and from his understanding, the School of Education’s caucus would not be an effective model.

For Elon freshman and Black student Jon Seaton, these meetings are a “horrible idea.” He said the meetings go against the university’s goal of inclusivity and should include students of color in the conversation.

“There’s no way you can get anything done on the issue,” Seaton said. “If you’re going to exclude the people who the issues are about out of the conversation, that’s counterintuitive. There’s just no positive outcome that comes from that.”

The backlash regarding the program follows an article published by The Young America’s Foundation, known as YAF, which is a conservative youth organization. Former Vice President Mike Pence recently joined the organization as the foundation’s Ronald Reagan Presidential Scholar on Friday.

South Asian Elon senior Jaya Bhardwaj wrote in a statement to Elon News Network that she was not surprised to hear about the white caucus and was disappointed.

“The only way white people can actively change their opinions and learn something valuable is if they listen to the stories and very valid feelings of people of color,” Bhardwaj said. “If Elon wants to make strides to becoming an actively anti-racist institution, deliberately excluding their already limited people of color from the conversation is incredibly unproductive.”

Williams said the university has been “reactive” in addressing issues involving race and inclusion and that steps to proactively address these problems needs to be taken.

“I do feel that we have been in a reactive type of space for, you know, particularly in the last year,” he said. “But I also recognize too that there are a lot of pressing things that were occurring and a lot of things trying to be managed during this challenging time that we're all experiencing here until we need to get a better charge.”

Williams said the creation of the division of inclusive excellence over the summer that he is leading will help to proactively address the concerns of students. He said the division would be able to give departments, faculty, staff and students guidance on how to approach diversity, equity and inclusion.

“What we've been working on is some framing for inclusive excellence at the university. So that is not just this ambiguous amorphous being that flows at a 50,000 level, but it's actually something that can be framed for individual departments, divisions as well as individuals themselves,” he said.

Seaton said he felt like he had been “lied to” by the school after seeing the article. Seaton said he wants to go to one of the meetings.

“I would honestly go just to see what’s going on, and I know my presence there would make a lot of people uncomfortable, but quite frankly at that point, I don’t care,” Seaton said.

Morrison and students who signed the email sent to students today did not respond to Elon News Network’s immediate request for comment.