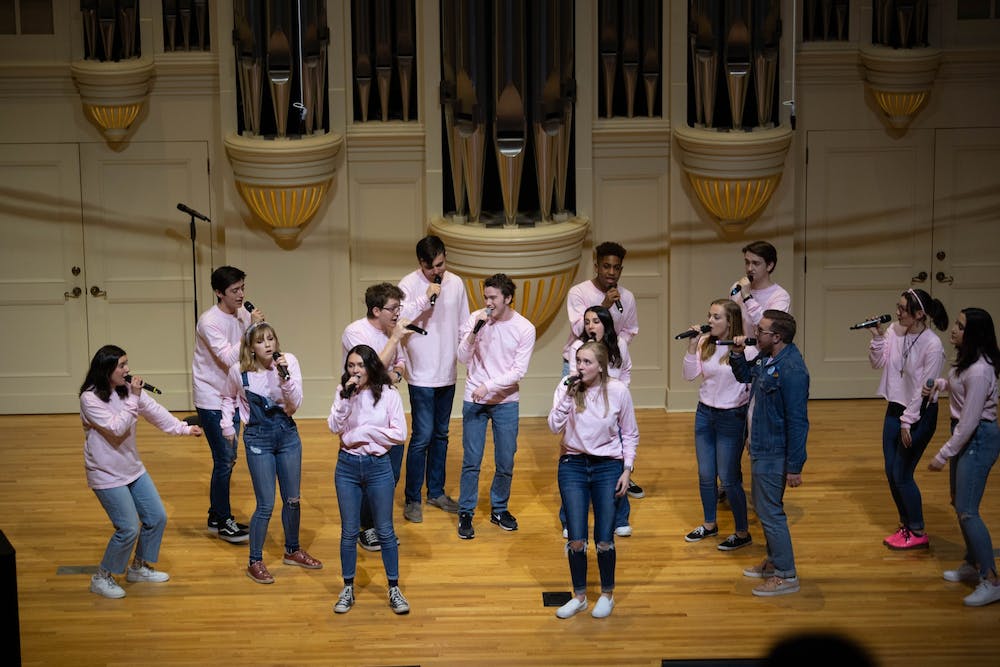 Vital Signs’ annual Make-A-Wish benefit concert will visually be different, but still showcase their talent and philanthropic work. The concert will be streamed on YouTube premiere Friday at 7 p.m. Members of the a cappella group said they will put on a show that will “feel like a concert,” but through a screen.

Elon University Senior Miles Caraballo, music director for Vital Signs, said the concert was Disney themed in years past, but members changed it to reflect love and happiness.

“This year, we decided to change the theme to ‘Spread The Love’ since it happens to be around Valentine’s Day and it’s a nice, warm theme to have paired with Make-A-Wish,” Caraballo said.

The Make-A-Wish organization raises money to grant wishes to children diagnosed with serious illnesses. Brief intermissions for donation opportunities through Venmo will be provided throughout the concert and will likely extend into the weekend.

“We do a lot of fundraising for this concert,” Caraballo said. “Last year our goal was $10,000 and we just barely missed it, but we are hoping to reach it this year.”

The concert will include performances by Vital Signs as well as other Elon a cappella groups such as Rip Chord, Shirley Tempos and Sweet Signatures.

Junior Logan Powers, a member of Vital Signs, said they decided to go bigger than ever this year with visiting groups from all around the U.S. and the U.K. Caraballo said groups from Oxford University are joining in on the excitement as well.

“For what would usually be just a community building event for Elon students, it’s more than that now. It’s inviting people from all over to be a part of something that is hopefully going to...raise a lot of money for an awesome organization,” Powers said.

Powers said the annual Make-A-Wish concert is his favorite event that the group does. Although COVID-19 restrictions have forced Vital Signs to get creative with the virtual event, members of the group are working hard to ensure a night to remember for all viewers.

“COVID has taken so much from students and this event has really brought together not just my group, but the other groups at Elon that are participating,” Powers said. “It’s brought us together in a way that hasn’t really happened in a long time.”

Senior Molly Logan, member of Vital Signs, said she is excited to see the creativity of others come to life during the concert.

“Since distance isn't an issue with our virtual format, we get to include a whole new pool of talent we haven't before,” Logan said.

Caraballo said Vital Signs put together a raffle with support from many Elon and Burlington businesses including Tangent Eat + Bar, The Root Trackside, The Inn at Elon and more. In addition, Deke Sharon, a pop a cappella icon who has worked as the music director for films such as the Pitch Perfect series, will be a guest speaker during the show as well as Make-A-Wish Foundation contacts and Elon University President Connie Book.

“I'm so excited that we have the coolest items to raffle off this year and I think that support has been inspiring in the context of the craziness of this year. I can't wait to see how it all comes together,” Logan said. “The groups involved have been super creative in making their music videos, so it's still going to be a super dynamic show.”

The link to the concert can be found on the Vital Signs Facebook account and will also be streamed on Acaville, an a cappella radio station.