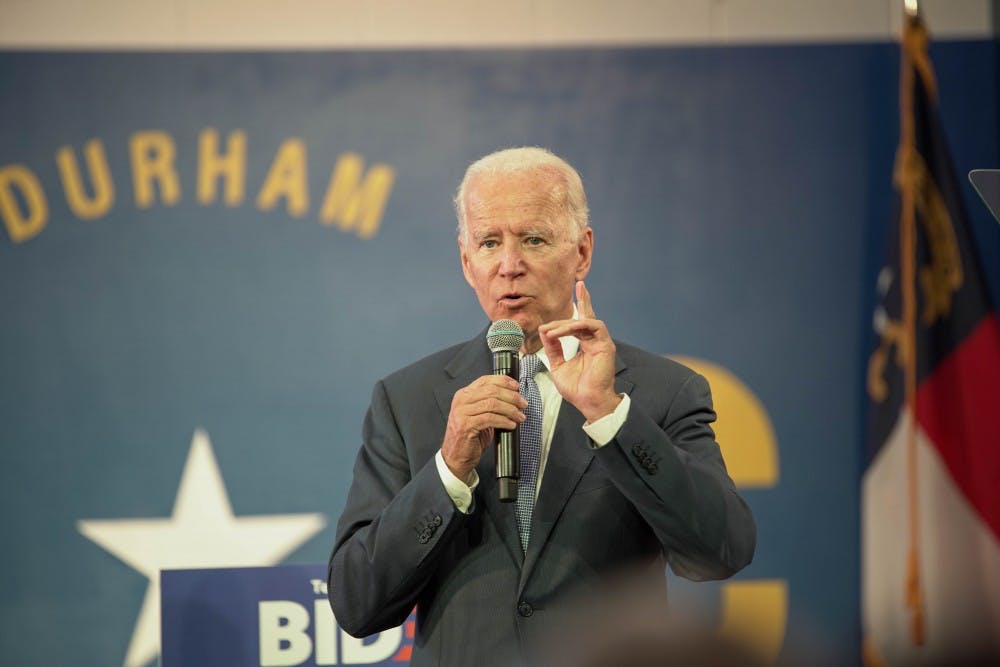 
Joe Biden giving a speech for his campaign at Hillside High School in Durham, N.C. Oct 27, 2019.

Since the announcement on Nov. 8 that Democrat Joe Biden won the election over incumbent Republican Donald Trump, Americans have watched lawsuits from the Trump administration contest the results with unfounded claims of voter fraud, an adamant Trump refusing to concede and the U.S. Capitol building stormed by a pro-Trump mob, leading to another House impeachment of the president.

With the inauguration on Jan. 20, Elon University students like junior Deena Elrefai, a public health and international global studies major, are anxiously awaiting the new administration to be sworn in after a heated few months.

“I’m just kind of hesitantly optimistic, waiting to see what will happen,” said Elrefai, who’s first choice was not Biden, but she preferred him over Trump. “I was not surprised at all that President Trump waited a long time to concede, I was actually surprised he did eventually.”

Elrefai — who hopes to see the Biden administration address issues about race with policing and healthcare, voter suppression and issues of generational wealth for minority communities — was disturbed by the growth in divisiveness post election, culminating with the insurrection at the Capitol.

“I’m less concerned about the Biden administration and more concerned about what this means for the future of democracy in general,” Elrefai said. “There are signs we’ve been seeing for years … it’s really scary to see the things you learn about in class come true.”

On the other side, sophomore Ryan Lockwood, a political science major and a member of the Elon University College Republicans, is nervous about how moderate Republicans like himself are having a hard time finding their place in the party.

“One of the things that’s really worrying me right now is the future of the GOP,” Lockwood said. “It is very worrisome because [the party] is beginning to have this divide between Republicans and Trump Republicans.”

While Lockwood was hesitant at first with acknowledging the early results, wanting to make sure the recounts occurred, his mindset shifted to wanting a smooth transition for the Biden administration.

“As of right now, there’s no voter fraud, and the election was fair,” Lockwood said, adding that the U.S. should, however, look into election security with the increase in mail in ballots and absentee voting. “I think we do need to see some improvements in our election system, understanding this was a special case with the massive increase of mail and absentee voting.”

Lockwood — like Elrefai — would like to see Biden work with both police and minority communities to engage in police reform, and is wishing the best for both the president elect and vice president-elect with a busy agenda ahead on Capitol Hill.

“The Senate now has to deal with the COVID package, the impeachment trial and Biden’s nominees all within the first three months,” Lockwood said. “There is a lot of work to do.”

As for Elrefai, she remains cautiously optimistic that the aftermath of the election cycle will subside, and that the divisiveness will lead to both sides of the aisle meeting at a compromise.

“It feels like everything has been moving really, really fast and no one’s really getting what they want on their side,” Elrefai said. “I’d be interested to see if we’re able to slow down and really listen to find solutions that work for people, or at least give them options to not feel like they’re completely out of control.”