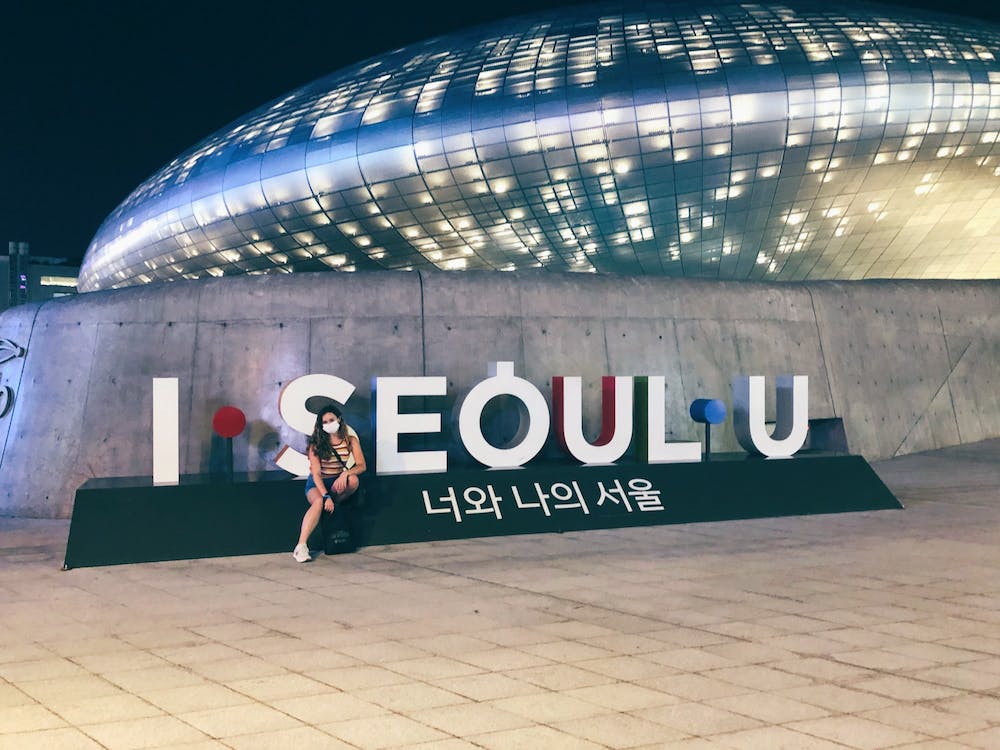 Junior Emily Wilbourne, one of the 19 Elon students studying abroad this semester, sits in front of the Dongdaemun Design Plaza in Seoul. Photo courtesy of Emily Wilbourne.

Junior Hannah Knapic faced a difficult decision. It was mid-May, and with the coronavirus only continuing to spread, her study abroad plans for the upcoming fall semester hung in the balance. After weighing her options and talking to her advisers, Knapic opted to pass on the trip. Knapic was one of more than 500 students who had planned to study abroad in the fall that had their plans changed.

Knapic had been accepted to spend the fall semester studying in Prague. She would have taken five classes through the program, including three political science courses, a literature course and a history course. She also would have traveled across eastern Europe, with trips to Budapest, Vienna and Warsaw during the semester.

Shortly after Knapic determined she would not be going on the trip,  most fall study abroad programs had been canceled, making her decision a bit easier to shoulder.

“I was definitely disappointed because the study abroad focus is one of the main reasons I chose Elon,” Knapic said. “But under the circumstances, it was pretty easy to accept.”

"I was definitely disappointed because the study abroad focus is one of the main reasons I chose Elon. But under the circumstances, it was pretty easy to accept."

While disappointed, Knapic believes it was best for her to wait to participate in a study abroad program.

“There will be other chances for me to go abroad, and under these circumstances, you’re not going to have the opportunities to make the connections you would during a normal semester,” Knapic said. “I was really afraid that I would regret going.”

There are 19 students — 15 of them undergraduates — currently participating in study abroad or study USA programs. There are seven students abroad in Germany, Rwanda, South Korea and the United Kingdom and six students completing Business Dual Degree programs in France, Germany and Spain. There are two students currently in Study USA programs in Chicago and Washington D.C. and four students are completing physical therapy clinical placements in Alaska, Arizona, Colorado and Pennsylvania.

Shanna Van Beek, the communications manager for the global education department and study abroad, said she knows all students, even the ones currently studying abroad, had their plans altered.

“Every person’s plans have changed because all programs are a little different,” Van Beek said. “Even for the students studying abroad this fall, the experience is not the same as they expected because of COVID-19.”

There are usually approximately 80 study abroad programs offered for the fall semester, but because of the COVID-19 pandemic, around 70 are not happening. Not all of these programs have been suspended, but many did not have Elon students registered.

With the situation constantly fluctuating, Van Beek is not sure if the programs still scheduled for the spring semester will be able to happen.

“I am confident in our processes, but I can’t definitively say if they will happen or not because we won’t know what the situation will look like even a month from now,” Van Beek said.

Junior Emily Wilbourne is studying in Seoul, this semester at Sungkyunkwan University. While it has not been a typical study abroad experience, she is still enjoying the opportunity.

“I’ve felt really safe here despite the pandemic, perhaps because I’ve been in a country with such an aggressive COVID-19 response,” Wilbourne said. “My classes have been mostly virtual, but I’ve still been able to have the best time here. I feel so lucky.”

Wilbourne watched South Korea’s case numbers closely over the summer, and upon finding out that Sungkyunkwan University was not canceling their exchange program, she made the decision to continue with her study abroad plans.

“By the summer, they had contained the virus to a level where I had no qualms about continuing my efforts to study in Seoul,” Wilbourne said.

52 countries are currently completeley closed. Only citizens, residents returning home or people in other special circumstances may enter these countries, according to Kayak.

95 countries are partically closed. Entry into these countries may depend on the traveler's citizenship or point of origin, according to Kayak.

68 countries have no formal restrictions on entry by air but may have other travel policies in place, such as mandatory testing or quarantines upon arrival, according to Kayak.

Junior Alyssa Merritt planned on applying to participate in the public health practicum offered in South India during winter term, but decided last March not to apply.

“I remember being really upset after making the decision. With my busy schedule, the winter term was the only chance for me to go abroad and I felt like I was missing an opportunity,” Merritt said.

Merritt said she was frustrated that the pandemic was limiting her options to advance her education, but understood the implications of traveling abroad under the circumstances.

“Deciding not to apply for the program was like me giving into the pandemic,” Merritt said. “When I was making the decision, myself, like the rest of America, didn’t know that coronavirus was a big deal, which made it tough. But as we know now, it is a big deal.”

Merritt will instead be participating in a domestic practicum in a location that is yet to be determined. While it is not what she originally envisioned, she is excited about the chance.

“I’m really looking forward to the practicum. I had no knowledge of what it was before because I had committed myself to the one in South India, but the domestic one is in an area [of public health] I am more interested in,” Merritt said.

Elon will be offering 10 May Term study abroad options to make up for the canceled winter programs. The travel will take place between May 22 and June 25.

Van Beek said she is appreciative of Elon’s faculty for putting May Term together during such challenging times.

“It’s taken a lot of flexibility and quick pivots from a lot of offices to make it work for this group of students,” Van Beek said. “Every office is willing to provide students with a chance for safe and ethical study abroad and global engagement opportunities.”