Marching through a pandemic 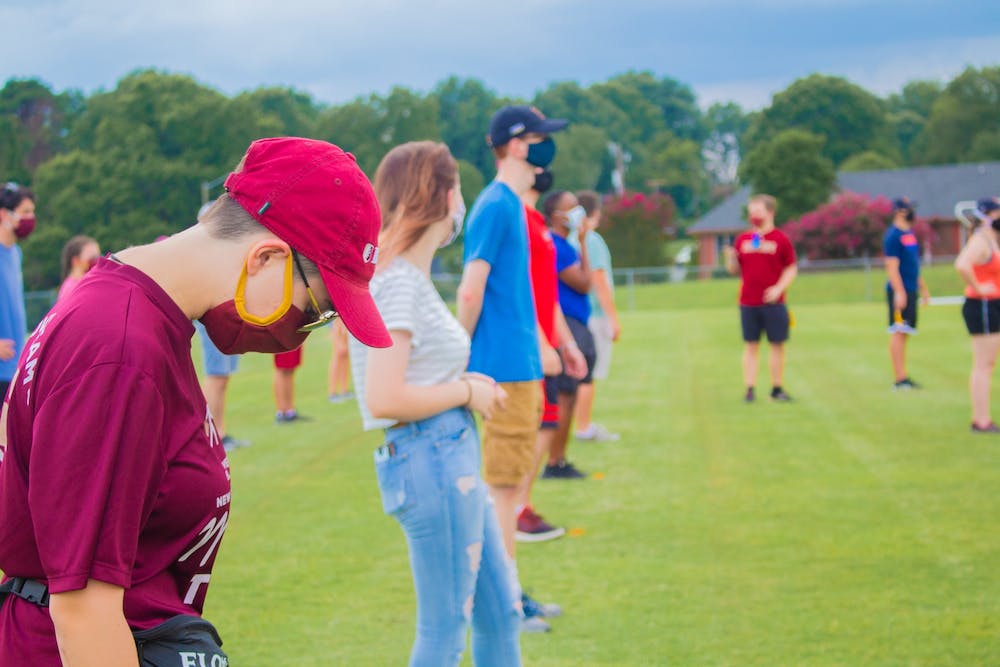 Elon sophomore Nic Hayes physically distances during marching band rehearsal on Wednesday, Aug. 19. The band has been given guidelines to safely practice, like all organizations on campus. Photo courtesy of Clara Mueller

“It can be bittersweet ... and frustrating at some times.” This is how sophomore drum major Mallory Poff characterized her feelings about being a member of Elon’s marching band during a pandemic.

Marching band, like all other clubs and organizations on Elon’s campus, was given a series of guidelines by the administration in order to conduct operations safely and limit the spread of the coronavirus.

For the band, these guidelines led to shorter practices and practicing in small groups organized by instrument rather than as a whole, while remaining at least six feet apart. For example, the clarinet players would practice together for half an hour while the trombone players did the same on the other side of the field. Additionally, the band is not practicing drills — choreographed marches that take place at halftime shows — in order to maintain physical distancing.

“It is hard sometimes, because you can’t even high five people or hug people or have that sense of family,” Poff said when verbalizing the effects these changes have had on band members.

“With the freshmen, [creating a community is] harder because they’re quieter ... a little more uncomfortable ... and trying to learn their names with sunglasses, hats, and masks is very hard. I feel like there is a lack of community, which makes me feel bad,” Poff said when describing how she was attempting to help new band members integrate using her new role as drum major, the person who conducts the drum section of the band during performances.

Coronavirus restrictions have also left the marching band without events to perform at, due to the lack of a fall football season for the Phoenix. The annual band camp — an event during which all members of the band, including incoming freshmen, meet each other and form a community before the start of fall semester — was canceled.

“[Band members] love band camp, we think it’s so much fun,” Poff said, “even though it’s a lot of work, and it’s hot, and there are long hours but we love it because it’s the first time you meet everyone and you get a lot of work done.” The cancelation of this yearly tradition was not only hard on incoming freshmen, who were looking forward to making new connections and meeting new people, but on seniors as well.

When asked about how senior members of marching band were feeling about the changes COVID guidelines brought, Poff said, “[Senior’s] were bummed when band camp was canceled because it was going to be their last band camp and … to not have ... those last football games, to not march a football show again ... it’s maybe nice to have that time to look for jobs, look for graduate programs, and have more time to themselves ... it’s probably bittersweet.”

However, Poff is remaining optimistic. As an engineering major in many STEM courses, Poff said her classes tend to have a heavy workload which can feel overwhelming. She feels that band serves as an outlet she has used in the past to have fun, hang out with her friends, and take a break from academics.

“Having band makes this fall semester a little bit more normal because we have something that’s a continuance from previous semesters and it’s something that I really enjoy and is really fun for me, and is definitely an outlet to escape from everything going on and just do band for an hour and a half twice a week,” Poff said.