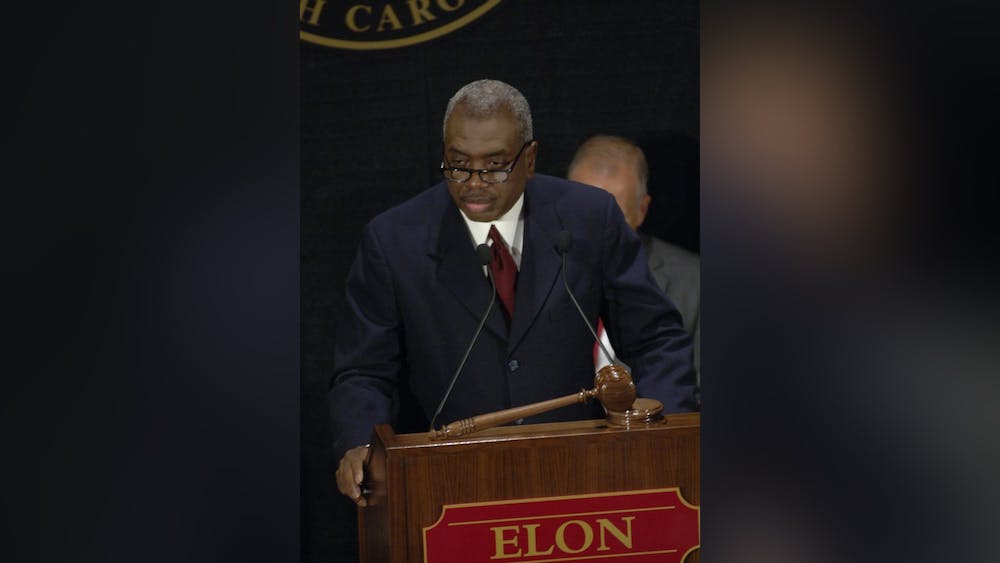 No matter how hard he tried, David Morrow, a 2010 graduate of Elon Law, could never fool George Johnson when it came to law. On many occasions before class, Morrow read off the beginning of a passage from the U.S. Constitution to see if he could stump him. Johnson always stopped him short and finished reciting the passage with immaculate precision.

“He was a brilliant man. He handled his students with such grace while always demonstrating his mastery of the law,” Morrow said.

Johnson joined Elon Law as a member of the founding faculty and served as the law school’s first associate dean of academic affairs. He then served as an interim dean from August 2008 through February 2009.

As the dean, a role he held until May 2014, Johnson guided Elon Law to full accreditation from the American Bar Association, which helped to raise the school’s national stature.

Following the conclusion of his service as dean, Johnson returned to teaching, where he led courses at Elon Law and mentored students. In 2020, the North Carolina Bar Association’s Minorities in the Profession Committee honored Johnson as a 2020 Legal Legend of Color.

President Emeritus Leo Lambert oversaw the creation of Elon Law during his 19-year tenure as Elon president and was impressed by Johnson’s leadership skills.

Johnson was well-respected and admired by both students and his peers and was an inspiration for many.

“George Johnson was a remarkable human being. He was a man of very deep integrity and sheer kindness that everybody liked being around,” Lambert said.

Elon professor of law Catherine Dunham, who served as Elon Law’s academic dean from 2008 to 2013, believed Johnson’s impact was felt greatest in the classroom.

“I think he had his greatest impact in being in the classroom and those really traditional, backbone subjects, where he asked tough questions and didn't necessarily give the answers,” Dunham said. “He looked at his students as competent to answer the tough questions and that led to lots of office visits and conversations, getting to know students on a much deeper level.”

Dunham noted that while Johnson was always professional in the way he carried himself, he was always willing to talk to students and help them

“He was very proper, very formal in his exterior, but very warm and very comfortable in a conversation and I think students are able to see all of those facets of his personality in the classroom and outside the classroom,” Dunham said.

Johnson served as a close mentor to David Morrow. Morrow was one of just two Black students in the 2010 class and was inspired by Johnson’s leadership.

“It was very inspiring to see Elon Law put their trust in an African American man to lead their program through ABA accreditation,” Morrow said. “Seeing a man of color in a leadership position gave me the confidence to go on in my career.”

Morrow won the 2016 George R. Johnson Jr. Professional Achievement Award, which recognizes Elon Law alumni who made significant professional contributions while bringing honor and recognition to Elon University School of Law. He credits a lot of his professional success to his relationship with Johnson.

“Much of our profession hinges on networking. He had a vast network, and he opened it up for me,” Morrow said. “He consulted with me on every step of my professional career. I really valued his opinion because of his professional experience.”

Morrow is thankful for the impact Johnson made on his life and wants his legacy to be remembered.

“The law profession is overwhelmingly white, so seeing a black man in his position was astounding,” Morrow said. “He was always there to support me, even long after I graduated. He was happy to see that I was happy.”

Baylor Rodman contributed to the reporting of this story.