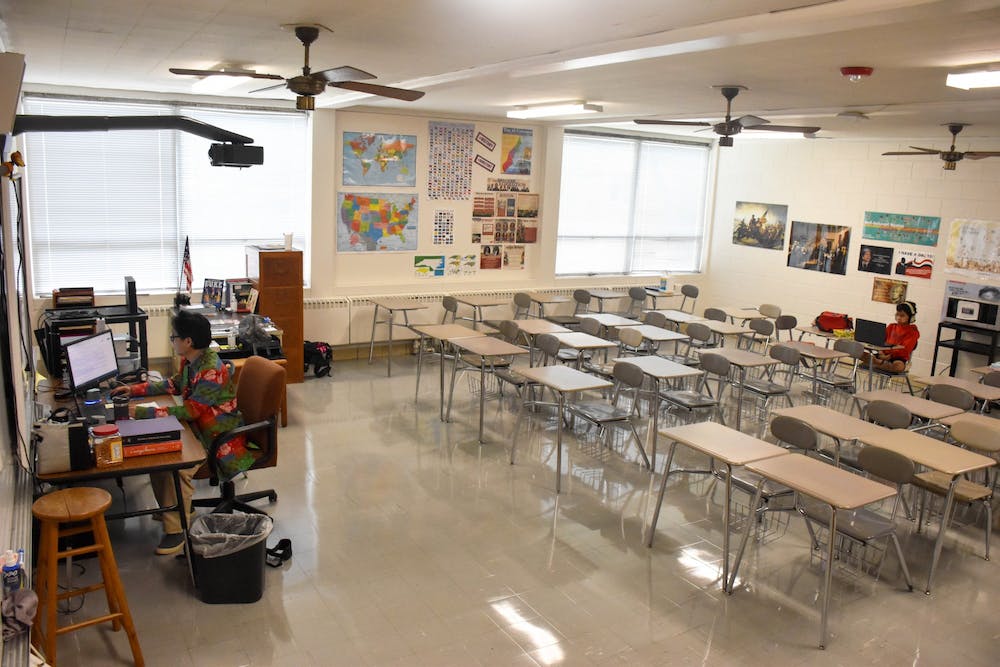 Photo by Grace Terry | Elon News Network
Derek Tang, a Turrentine Middle School teacher, teaches his class from an empty classroom. The only other people in the room are his own kids, who are in their own classes online.

Jessica Bowman had to stop working in the spring when it was announced that her kids would be learning remotely as the coronavirus began to spread. Bowman — who works as a house cleaner — still hasn’t started working again and her kids are still doing school online. She said her kids have not adjusted.

“They’re just not doing as well as they would in-person,” she said. “And I think my kids have to have that hands-on training or hands on learning.”

The Alamance-Burlington School System originally planned to start the year remotely and transition to Plan B halfway through the semester. But on Oct. 23, ABSS reversed course and decided pre-K through 12th grade students would not return to the classroom until January 2021. When it came to reopening schools, Gov. Roy Cooper decided to give schools the option between Plan B, a hybrid of remote and in-person classes, or Plan C, all remote classes. Plan A — all in-person — was not allowed.

Being online has been difficult for Bowman’s youngest son, Liam. Bowman said that with classes online, he has not wanted to go to class and has had trouble paying attention.

“He was doing real good whenever he went to headstart and pre-K,” Bowman said. “But now that it’s online and at a computer, he just can’t sit still [...] it’s like everything distracts him.”

Bowman has no one to help her elementary-age kids with their school work as they do classes remotely.

According to a recent survey from the Elon University Poll, 39% of North Carolina residents think their students are learning less this school year compared to previous school years.

Turrentine Middle School teacher Derek Tang has been teaching social studies full time for two years. But now, he sits in a mostly empty classroom with unoccupied desks except for his two children. Every day is “take your kids to work” day as he teaches on Zoom.

Tang spent the summer preparing for online instruction. He said most of his students aren’t having trouble grasping the curriculum, but those who would need extra help understanding the material during instruction still need that help with online classes.

“The students who would get it are doing fine in this setting and I don’t think that that’s any different from how it would be if they were in-person,” Tang said. “And I think the students who I’m having to put in a bit of extra effort to prod them to turn in their assignments and keep up with the lessons and stay on top of deadlines, I think that group is also turning out to be the group that I would probably have to stay on top of in a in-person setting.”

Aubrie Cifelli ‘05, a third grade teacher at Andrews Elementary School, said her students who would normally struggle in-person are struggling online and it’s a matter of giving them more help like she would if the school was in-person.

“I would say the ones that are already strugglers that they’re still struggling [...] I try to give them one-on-one support,” Cifelli said.

She said it has been difficult for students who are hands-on learners and need to manipulate things, but ABSS has online programs that can help struggling students in areas such as reading.

“It’s a lot harder when you can’t actually see them and point to them things and have them point to things and manipulate,” she said.

While Tang’s students aren’t having more difficulty than typical with understanding the material, he said the biggest challenge with online instruction is engaging students who don’t have the resources at home for online learning.

ABSS has been able to provide students with resources and materials to bridge the technology gap. ABSS has distributed 17,204 Chromebooks and 3,850 hotspots to students across the district, according to the public information officer for ABSS.

The district has also boosted the Wi-Fi of three daycares across the county during the school day.

But ABSS’ efforts haven’t been able to reach all students. Tang said he has students who he’s only seen once this semester.

“I do still have student[s], unfortunately, several students on my roster who I have not seen since day one,” Tang said. “But we’ve tried and exhausted pretty much every method that we’ve had available in which to reach out to these students and their families.”

Tang said his school has repeatedly tried contacting families via phone, email and even home visits, but some students still haven’t shown up to class.

Although she wishes she could see her students in person, Cifelli said her students are still engaged even through the screen.

Hotspots provided for students to connect to for school and homework hours by the Alamance-Bulington School System.

“There was this discussion of going possibly back to this Plan B going back to school that hybrid [model] and I was like, it kind of stinks cause like, we’re in a groove now. We were really rocking it,” Cifelli said. “They know my expectations, they enjoy the things that we’re doing. We try to keep it as interactive as possible. We don’t want a bunch of just lecturing like ‘Hey manipulate these things, match things, drag these things on the slides, watch this video.’”

Tang made his expectations clear for students at the beginning of the year: assignments were going to be graded like an in-person semester.

“I hope that the students are able to maintain consistency, you know, and I think now that routines have been established expectations have been made clear,” Tang said. “I think that students have a much clearer understanding of what’s expected from them.”

Bowman wants her son back in the classroom as soon as possible, but recognizes the return to the classes must be done safely.

“I think that they should have ... went back to school. Like, they should have just started off the year in school actually in the school building or to have the option of [going to school],” Bowman said. “I mean, I was glad they were taking the precautions that they take.”’

ABSS opted to begin the year with remote learning and transition to a hybrid model halfway through the fall.

That same Elon Poll survey found that 22% of North Carolina residents think K-12 schools should return to full time in-person classes “as soon as possible” and 34% think that they should return “only when there is a vaccine and/or treatment for COVID.”

Bowman said she not only wants her kids to be back in school for the better of their education, but so she can return to work.

She said there’s not someone to look after her kids every day.

“I don’t make enough to pay for daycare,” she said. “That’s too expensive.”

While her students are still engaged online, Cifelli misses the interactions she had with students in-person.

“I’ve been telling everybody and the parents ‘Like, believe me, I absolutely wish we were all back in school. I wish we could rewind time and go back to February and go back to just like being with them,” Cifelli said. “I truly do miss those kids and would love to be hugging them every morning, and high-fiving, fist bumping, celebrating, everything in-person. I really do miss it.”