North Carolina’s U.S. Senate race has taken a turn with an extramarital relationship and coronavirus diagnosis among the major candidates 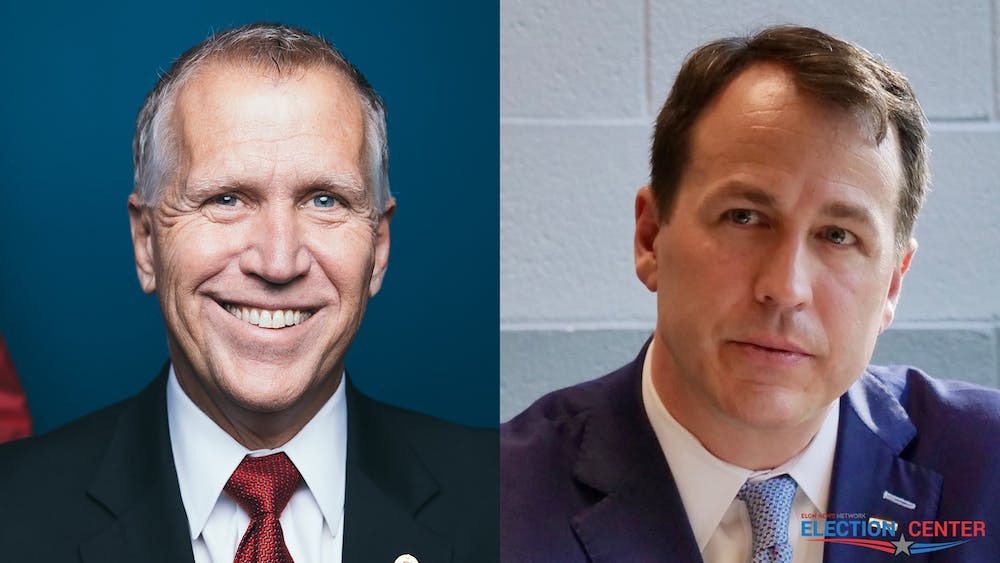 With 35 of the 100 U.S. Senate seats up for election in 2020, Democrats are looking to unseat incumbent North Carolina Sen. Thom Tillis with their candidate Cal Cunningham.

Tillis, 60, is seeking his second term in office after defeating then Democrat incumbent Kay Hagan in the 2014 elections. Before becoming a senator, Tillis served as Speaker of the North Carolina House of Representatives for nearly four years.

Cunningham, 47, is a former state senator and retired military officer. Throughout his career Cunningham has worked at law firms and most recently worked at WasteZero — a Raleigh-based company that works to reduce waste — as vice president and general counsel.

Neither campaign responded to numerous requests for an interview with the candidate, but did provide statements on issues sent to the campaigns by Elon News Network.

As the coronavirus pandemic continues to affect thousands in North Carolina each day, it also is impacting businesses that have been forced to comply with state mandates to help slow the spread of the virus. Now in Phase 3 of reopening, more spaces, including entertainment venues, are now allowed to open at a limited capacity.

Tillis believes the staggered reopening process places the state in a “good position.”

“Protecting the physical health of our nation and its economic health are not mutually exclusive, we can and we must do both. It’s possible to safely reopen North Carolina,” Tillis’s campaign said.

Cunningham believes the restoration of the economy will not occur unless the virus is under control.

“Critical to North Carolina’s phased reopening plan is widespread testing and personal protective equipment to help us reopen with peace of mind, keep frontline workers safe, and ensure we have the testing capacity we need,” Cunningham’s campaign said.

With millions of Americans still facing the financial impact of the coronavirus pandemic, Washington has worked to negotiate another round of financial assistance for Americans and businesses for months with little progress.

Talks continue between the White House, Senate Republicans and House Democrats to hammer out, what is looking like, a more than $1 trillion dollar deal.

Both candidates agree that another round of stimulus legislation is necessary.

“Going forward, we need to pass another round of stimulus legislation that extends the Paycheck Protection Program, provides additional money for unemployment, as well as resources for health care providers and schools,” Tillis’s campaign said.

“I supported the CARES Act and its direct payments to families, as well as its expanded unemployment benefits, but more help is needed to help Americans weather this crisis,” Cunningham’s campaign said.

In the wake of George Floyd’s death, people across the country renewed calls to remove Confederate statues and monuments because of their historical ties to racism. Others argue the statues remember the history of the United States.

The issue has come up in Alamance County, as a Confederate monument sits outside the courthouse in Graham.

Both candidates have differing views on what should happen with these monuments across the state. Tillis believes the removal of statues should be up to the local community.

“I don’t think a decision on Confederate monuments should come from a mandate from Congress. Instead, all stakeholders need to come together and make a decision on what is best for their specific community,” Tillis’s campaign said.

“Confederate monuments belong in museums and cemeteries, not in the public square or our places of government. There are dozens of American heros for whom Fort Bragg would be better named, and I support a dialogue locally and with military officials about its renaming,” Cunningham’s campaign said.

Extramarital relationship and a coronavirus diagnosis

Both campaigns have had disruptions as Cunningham deals with text messages suggesting an extramarital relationship and Tillis deals with the continued fallout of his early October coronavirus diagnosis.

Cunningham is married with two kids.

“I have hurt my family, disappointed my friends, and am deeply sorry,” Cunningham said in a Oct. 2 statement. “The first step in repairing those relationships is taking complete responsibility, which I do. I ask that my family’s privacy be respected in this personal matter.”

Cunningham dodged several questions during a virtual press conference with reporters on Friday.

“I have taken responsibility for the hurt I have caused in my personal life.I have apologized for it. I have apologized to the supporters of the campaign and now this campaign is about much more,” Cunningham said Oct. 9.

Following the press conference the Tillis campaign released a statement claiming his refusal to answer questions “makes him unfit for office.”

Prior to testing positive, Tillis attended an outdoor Rose Garden ceremony formally nominating Amy Coney Barrett to the U.S. Supreme Court. Tillis was one of only a handful of people to wear masks during the outdoor ceremony, but at a smaller reception inside the White House, photos show Tillis was not wearing a mask.

"I have to admit that I let my guard down because we'd all been tested about two hours before the event," Tillis told WRAL. "It's just another experience that tells me, even when you think you're in a safe setting, you should always wear a mask."

Tillis said moving forward he will wear a mask whenever he is around people.

"That doesn't excuse the fact that, in every case, we should wear a mask because scientists tell us to do it," he said. "In that brief moment when I was there with Judge Barrett and the president in the reception area with a subset of the group from the ceremony, I did something I shouldn't have done.”