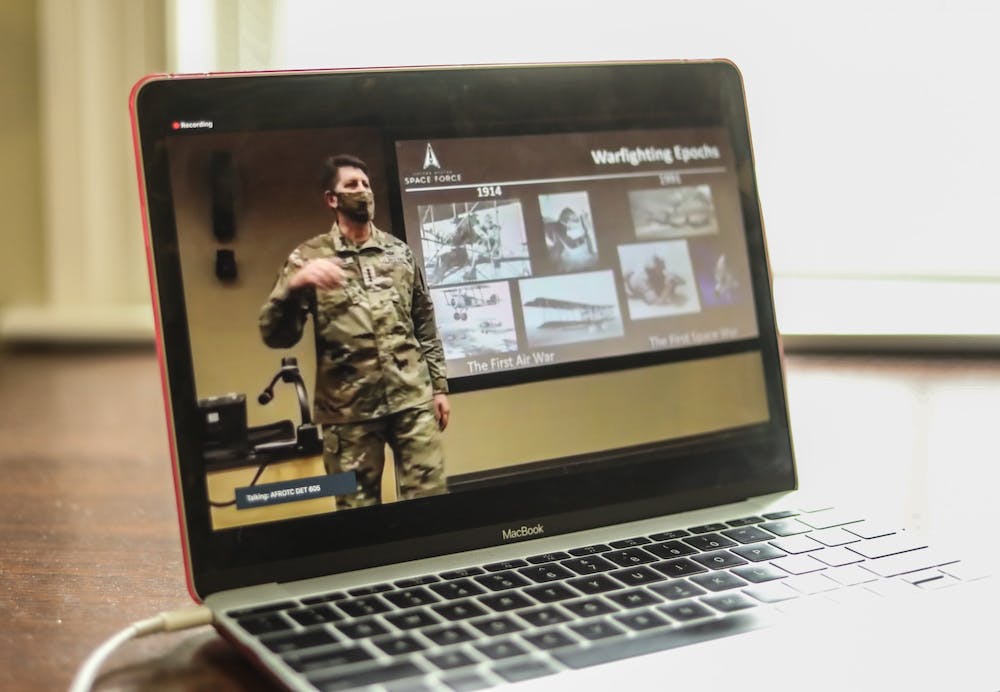 
Gen. David Thompson lectures about the necessity of the Space Force over Zoom.

Due to its recent implementation as a division in the Air Force, limited information is known about the extent of the Space Force’s operations. In his lecture, Thompson attempted to assuage concerns from cadets. For Elon University junior and Cadet First Lieutenant Stephen Haley, the lecture provided clarity on the Space Force.

“He really dug deep into why we have it and why we’re doing it. And to me, I liked that a lot better which did shed light on what the mission was and what they were going to be doing,” Haley said.

The U.S. Space Force was founded in 2019 and established by Congress in the National Defense Authorization Act for fiscal year 2020, which provided $738 billion total to be allocated for defense programs, including the Space Force. The Air Force was given more than $15 billion to establish the new unit.

Endorsed by President Donald Trump, the act states that the Space Force, “includes both combat and combat-support functions to enable prompt and sustained offensive and defensive space operations and joint operations in all domains.”

The Space Force provides training for mission-ready space forces to protect U.S and allied interests in space and enforces the military’s domain in space, according to its website.

As one of the two leading generals in the Space Force, Thompson oversees its operations, including recruiting efforts.

“Starting with the junior class of this ROTC class and others, if you want to join the Space Force, you’ll need to let the leadership in your ROTC detachment know,” Thompson said in the lecture.

When Thompson walked into the smaller room with the Elon group, senior Christian Chybrzynski, cadet wing commander of the Elon ROTC chapter, noticed the underclassmen cadets' faces “light up.”

“I do think this was a great opportunity for young cadets,” Chybrzynski said.

While Chybrzynski does not feel like the Space Force is right for him since he is interested in being a pilot, he felt Thompson provided an accurate depiction of life in the Air Force. His takeaway from the lecture was to focus on the job and the tasks at hand.

Like Chybrzynski, Haley also still wants to pursue his dream of being a pilot.

“If the opportunity presented itself and I thought it would be a good time or something that would be worthwhile then I would look into it,” Haley said.

In particular, Haley said that the focus on GPS tracking and satellite locating measures implemented by the Space Force would be not only useful for preserving the cellular features seen in everyday life, but for protecting the systems the United States has in place with satellites.

“Every country has the capability to shoot down those satellites. And without satellites, our everyday life is going to be crippled. We’ve become very reliant on the technology and the advancement of them,” Haley said.

But Haley said there’s still work to be done on people’s understanding of what the Space Force does.

“A lot of people if you walk around campus and say ‘what do you think of the Space Force’, they’re probably just going to think of the Netflix series and laugh,” Haley said. “They probably think of space Marines and fighting on Mars. At the moment, that’s not it. It was good for me to see what the why was.”