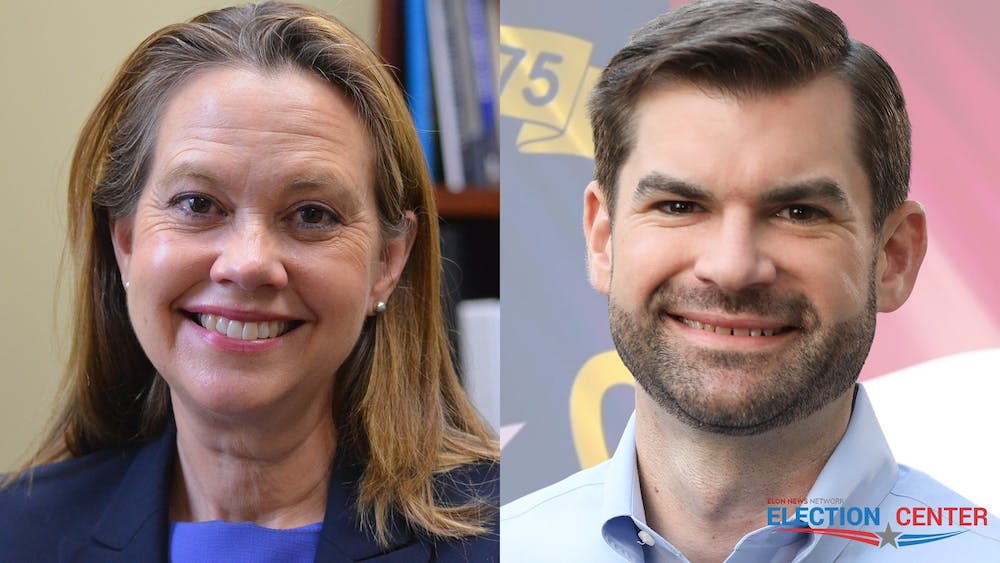 With incumbent Rick Gunn (R) having stepped down after his 2018 term in office, both Galey and Wooten would be serving in this role for the first time if elected.

Education is a key issue

Both Galey and Wooten spoke to the importance of high-quality education in Alamance County, and acknowledged issues within the Alamance-Burlington School System — such as a lack of diversity among teachers.

Wooten said education is "at the forefront" of his platform, and said the coronavirus pandemic hasn't changed his overall vision.

"The pandemic has merely emphasized the importance of what we were already fighting for," Wooten said. "We've got to be investing in educators that are equipped and trained to teach our children to make them prepared for today's economy."

Wooten added that access to broadband in rural areas of the county is more important than ever as remote learning highlights inequality between students.

"Broadband access is at the level of being a utility. It is part of our society now, we need to do something to address making sure that everyone has broadband access," Wooten said, "Especially if we're expecting our educators to teach remotely and our children to learn remotely."

Galey agreed with this sentiment, adding that her personal experience with slow internet has highlighted the importance of broadband access for her.

"I actually live in a part of the county that does not have access to high speed internet," Galey said. "It makes it really difficult for my son who's still in high school to be able to do his work, and it makes it difficult for me to participate in Zoom meetings online."

Galey added that she would support connecting rural areas with fiber internet.

"We need to pay the money and run the wire if that's the technology that is the best," Galey said.

Both Galey and Wooten agreed that recruiting teachers of color as ABSS is trying to do is important, but differed on how to do so. Galey said fostering better working environments would aid in teacher retention, while Wooten said he would support bringing back programs such as the Teaching Fellows program to provide incentives to teachers.

Galey and Wooten both said they would support expanded Medicaid, but in different ways.

"That's not acceptable," Galey said, adding that she would support expanded Medicaid to specifically address this issue.

"I think what's been shown has been that when you address the disparities for African Americans, then the outcomes actually improved for the general population as a whole," Galey said.

Galey would not support a general expansion of Medicaid, she said.

"I don't believe in just turning on the faucet letting the money flow and seeing what happens," Galey said. "I think that if you have a challenge that's been identified, and you have a reasonable way to address that challenge, then that is something that we should invest taxpayer money in."

Wooten takes a more generalized and expansive approach to tackling healthcare. He said expanded access and use of Medicaid "lowers everyone's cost" when "insurance is pooled."

Wooten lamented the number of North Carolinians falling into the coverage gap – as of 2019, over one million people.

"As you work to expand that access to healthcare for everyone, it is a help to everyone across the board," Wooten said.

While Wooten said the state has been moving at the right pace for coronavirus reopening, Galey said the reopening process has been too slow.

"I think that the governor's plan with the stay-at-home order was appropriate," Galey said, but added that "Back in March, we didn't know what was going on with the virus. We didn't know how people were going to be impacted."

Now, Galey said, North Carolinians are better equipped to deal with the virus and should be allowed to return to work and recreational activities.

"I've talked to a lot of business owners who are at the very edge of going under, if not going under," Galey said. "The negative impact has been tremendous."

In contrast, Wooten said North Carolina has been reopening at the right pace and said he supports Governor Roy Cooper's phased plan

"We need to stay the course. We've got to do this the right way," Wooten said. "I don't think that there is a too fast or too slow that you can project out. I think we can only know the benefit of hindsight."

Wooten added that reopening too suddenly before the availability of a vaccine would result in a "massive surge" in coronavirus cases, as seen in other states that took that path.

Contention between the candidates

One issue has presented a shadow over both Wooten and Galey's campaign: Wooten issued Galey a cease-and-desist letter, and subsequently filed a lawsuit following mailers authorized by Galey's campaign that falsely accused Wooten of defrauding the Veteran's Association.

The statements by Galey's campaign were proven false, but Galey defended both the authorized and unauthorized statements.

"To me, there is a legitimate question about whether or not he intended to make the house outside of this district his primary residence, and whether or not he was fully truthful with the lending agency, when he made that certification," Galey said, referring to social media posts indicating he intended to run for NC Senate District 24 when he used a VA loan to move into a Greensboro home. There were no posts on Instagram or Twitter proving Wooten had decided to run before he closed on the home in October 2019.

"This is America, and we can question people," Galey said.

The First Amendment right to free speech does not cover defamatory statements, though it is generally considered more difficult to prosecute speech than to defend it. A senior official for Wooten's campaign who spoke on the condition of anonymity given the pending lawsuit said the right to free speech does not mean people can "falsely accuse someone of a felony" and said the claims approved by Galey's campaign were "clear and unambiguous" defamation.

In a written statement provided to Elon News Network, Wooten said it was difficult for him to hear the claims made against him. Wooten wrote that the goals of his campaign has given him "the strength to push through whatever ridiculous lies Ms. Galey wants to tell about [Wooten]."