For the next three years, Elon will be the host of the Pi Sigma Alpha Undergraduate Journal of Politics 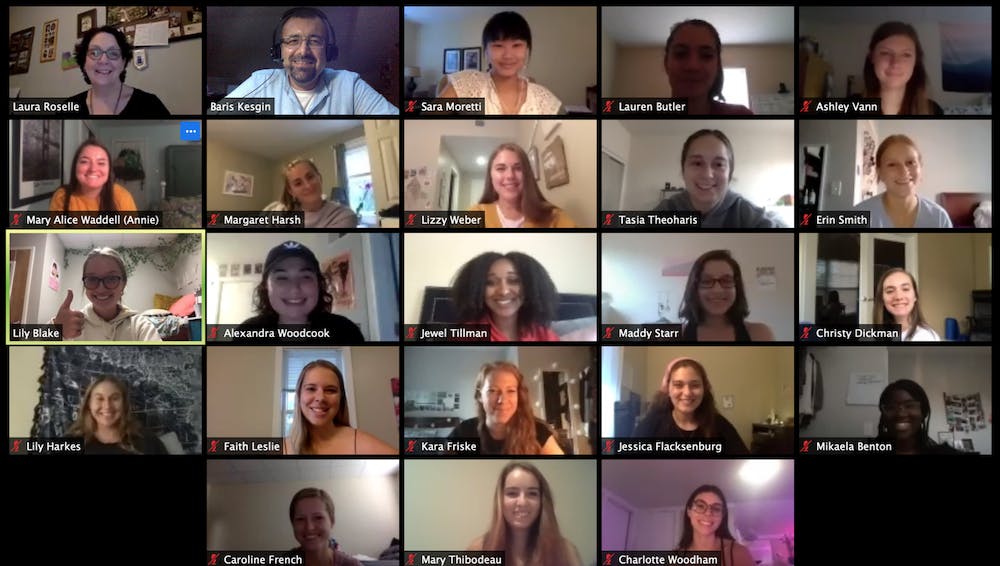 The editorial board for the Pi Sigma Alpha research journal meets for the first time over Zoom to discuss the Fall 2020 issue. Photo courtesy of Baris Kesgin.

Elon will be the fourth school to host the journal since it was founded in 2001, joining Union College, the College of William & Mary and Oakland University who were past hosts.

“The fact that Elon gets to say its students get to decide what political science research goes out into the world is so incredible and something very few institutions can say,” Tasia Theoharis, a co-content editor for the journal, said.

Elon’s chapter of Pi Sigma Alpha was founded in 1992 and has inducted over 800 members since its inception.

An editorial board of 20 Elon students is responsible for evaluating the submissions based on the quality and applicability of the research to the political science community. There are three co-faculty advisors — Laura Roselle, Baris Kesgin and Aaron Sparks — all of whom are political science professors at Elon. The three professors will take turns as the lead faculty adviser over the course of the university’s three year host term.

Students applied to be part of the editorial board last spring and the members are all currently in the POL 271: Analyzing Political Inquiry course, which contains readings on putting together a journal. Most of the students on the board are political science majors, although being a political science major is not a requirement to be an editor.

Due to COVID-19, all meetings have been held virtually through Zoom. The team utilizes breakout rooms to evaluate manuscripts and decides in small groups whether papers should be rejected or published with revisions. The accepted papers then go off to be revised by faculty members from universities all over the world.

This year’s board is composed entirely of women. Though that was not done intentionally, junior co-content editor Christy Dickman said the group has taken inspiration from another journal, the American Political Science Review which recently also had an all-woman board for the first time.

“We’ve been looking up to them and are excited to see a new direction in the field where female leadership is accepted and encouraged,” Dickman said.

“Political science is typically a male-dominated field, so it is definitely cool to see an all-female editorial board,” Roselle said. “They are all very excited about political science and it has been fun to see how much they have enjoyed the experience,”

According to Dickman, working on the journal has been very helpful for her as a political science student.

“It’s helped increase my knowledge on what makes a compelling research paper. It’s helped me learn about some of the necessary components for good research and what topics and issues are generating the most interest within the field,” Dickman said.

Theoharis said the board is attempting to include a broad range of topics in the journal this year.

“We are trying to make the journal a friendly place for people who are interested in studying all types of politics, not just the really common, only-studied areas like international relations and American politics,” Theoharis said.

She said the board would like to include research on gender, race and sex studies.

The deadline for fall submissions was in early October, and the team is currently in the process of reading through the more than 100 manuscripts that were submitted for consideration. The board must then begin the process of selecting just four to six articles to include for the fall publication.

For Theoharis, the most rewarding part about being on the editorial board has been working with the team of students.

“They are very supportive. We have grown and learned together. There has been a steep learning curve and I know I have made some mistakes, but it is nice to work in an environment where I feel comfortable to be myself,” Theoharis said.

Hosting this national research journal is an important achievement for Elon and the political science department and will provide great opportunities for students over the school’s tenure as host, Roselle said.

“The editors on the board of a journal like this are gatekeepers for information and research,” Roselle said. “For Elon students to have that opportunity is a big deal, and having their names published in such a prestigious journal is going to be amazing.”

The deadline for submissions for the journal’s spring issue is Feb. 2.