Sisters set out to create a sustainable style 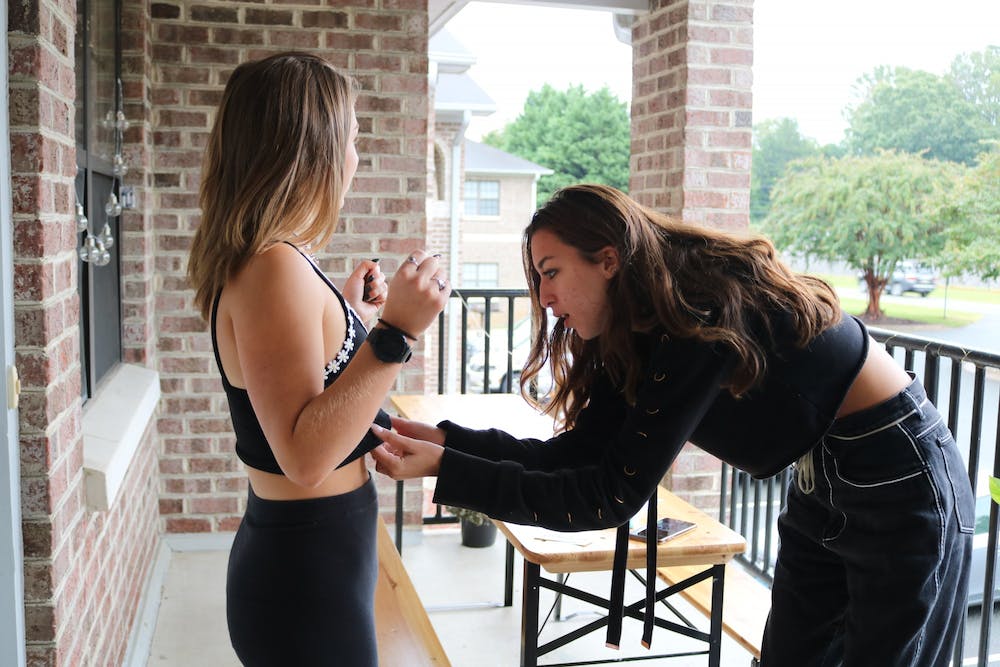 While spending time in Prague during her study abroad experience in the fall of 2019, Brigette Hedvat ‘20 noticed that in contrast to America, Czech people had a stronger commitment to sustainable lifestyle choices.

It was this cultural difference that inspired Hedvat to start a clothing brand. In June 2019, Brigette Hedvat launched UENVI with her sister, Adrienne Hedvat, who is now a senior at Elon University.

UENVI is a sustainable lifestyle company that makes an array of one-of-a-kind pieces ranging from t-shirts to swimwear.

The company name has a few meanings. The “U” stands for universal, unisex and university. “ENVI” is short for the environment, while also acting as a play on words — those who do not wear UENVI envy people who wear UENVI because they wish they had their clothes.

“We want it to be sort of a play on words; like, you envy whoever is wearing UENVI because you should be wearing UENVI,” Brigette Hedvat said. “And I think it’s kind of awesome the way that that worked out, because I think it still sounds kind of cool and catchy.”

Although the sustainable practices they use to make their clothes is inspired by the Czech Republic’s environmental practices, the style seen throughout their pieces comes from the personal fashion sense the Hedvats have adopted throughout the years growing up in Connecticut while also making frequent visits to New York City.

“I think our mom always encouraged us to express ourselves through fashion and the arts starting at a really young age. Maybe we didn’t realize that we were standing out, but we were always encouraged to be different,” Brigette said.

The sisters always knew they wanted to start a clothing company and were transforming their old clothes into new creations starting at a young age with the help of safety pins and scissors.

Part of their draw to fashion was due to the fact that both of their parents worked in the industry. On the weekends, the two would go into Manhattan with them to their clothing boutiques and while in the city they were exposed to the array of styles seen among the people.

Working without waste, genders or sizes

When looking for fabric to use to create pieces for clients, the duo said they get donations from friends while also making use of Goodwill. But wherever the fabric comes from, nothing goes to waste, according to Adrienne Hedvat.

Since the start of their company, the Hedvats have made use of a wide variety of items for their pieces from old t-shirts to shoe bags.

“It’s been fun for people and for us to see what we can create out of something random,” Brigette said.

UNEVI is a unisex company and does not have its clothing split up into men’s and women’s categories. They believe that any person of any gender can wear any of their pieces.

“We don’t want anyone to feel like they can’t buy something just because we said it’s for another gender … it’s that we don’t think that that’s how fashion should be, because it’s such a creative and free-spirited industry,” Adrienne Hedvat said. “We figured, ‘why even have these categories anyway?’”

On their website, like gender, no sizes are listed. Each piece in their collections is one-of-a-kind, available in the one size it was made in. The sustainability efforts seen in this brand extend beyond the fashion itself. On each UENVI clothing item, the tags are made from old fabric with writing on it saying where the original piece was donated from.

After completing an order, the sisters place their pieces in recycled packaging that includes a hand-written reminder reading, “please reuse me.”

Not only are the clothes recycled but Brigette and Adrienne Hedvat are also recycling part of their profits by donating to different causes and charities.

As a minority-owned company themselves — their mother is Puerto Rican and their father Iranian — the sisters felt a duty to support Black Lives Matter movement.

“Manhattan being our second home, it just felt right for us to donate to that cause specifically, ” Adrienne said.

Their most recent collection, a swimwear line called Para La Isla, was released July 27. Part of the proceeds from this collection went to the organization, Para La Naturaleza, a nonprofit dedicated to conversing Puerto Rico’s ecosystem.

“After everything that has happened to Puerto Rico with the environment and the way that the United States has handled helping the island has been really awful,” Brigette Hedvat said. “Because our mom is from Puerto Rico and we spent a lot of our childhood going there, we wanted to do something where we could give back.”

Aside from donating to causes in need, Brigette Hedvat said one of the most rewarding things she has seen since the start of UENVI is the impression it is making on its customer.

“We have made relationships with random clients where they just feel such a connection with us, which is such an incredible feeling because we’ve made such an impact on their lives,” Brigette Hedvat said.