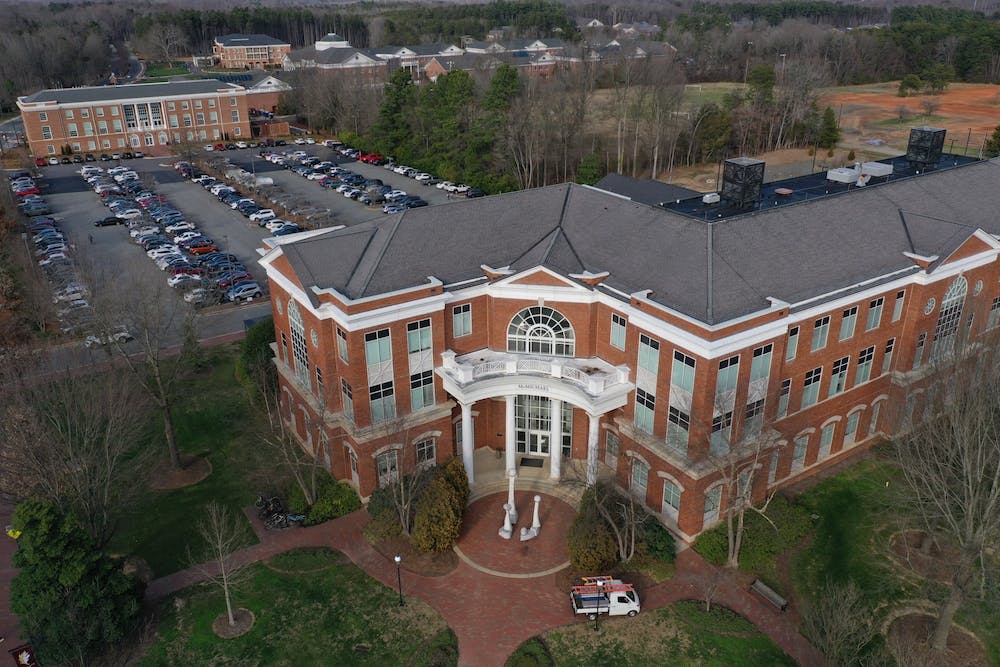 Photo by Clare Grant | Elon News Network
A view from above the McMichael Science Center, where the Innovation Quad will be located behind.

The Board of Aldermen passed the Elon University major development plan at the regular session on Oct. 13. Board members also passed a water-sewer connection and sewer only connection policies as well as amendments to the town of Elon code of ordinances and the holiday display policy.

The major development plan includes a new parking lot on a portion of the old Elon Elementary School lot, which the university hopes to complete by the end of the year, as well as the new engineering and physics building, planned to be completed by fall 2022 as a part of the university’s 2030 strategic plan.

Brad Moore, university architect and director of planning, said “as long as things straighten out with COVID,” the university will begin construction on the new building on March 1, 2021. The 65,062 square foot building will be located between the McMichael building and Sankey Hall.

Policies concerning water and sewer connections as well as sewer connections only were approved by the board. The policy adds language dictating that a shut-off valve for sewage would be installed at the homeowner’s expense in addition to any outstanding debt on the account, rather than being paid for by the town. The estimated cost of such an installation could be approximately $400-600, according to Assistant Public Works Director David Murphy.

Town Engineer Representative Josh Johnson said residents will “go through a process with proper notification” before a sewer system is shut off and the valve would be installed following the notifications. At that point, Alamance County can address the environmental health concerns present.

In the future, all sewer only residences will need to be approved by the board, and will require six months deposit.

Town Manager Richard Roedner presented the holiday display policy, which gives guidelines on holiday displays on W. College Avenue and at Beth Schmidt Park. The policy designates specific times and public places in the town of Elon that can be used to showcase symbols from different holidays.

The board passed the policy, but will continue to discuss language surrounding possible alternative locations for the displays as well as the time frame indicated in the policy. The time frame is currently Thanksgiving to Jan. 10, however board members asked to think of timing for other religious holidays, such as Easter.