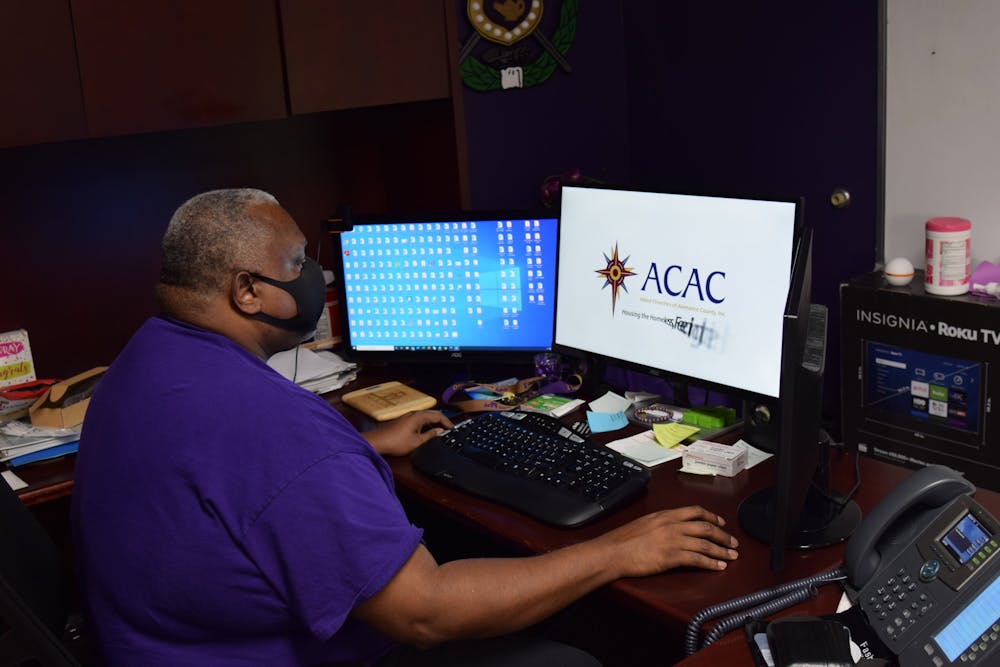 Photo by Kyra O'Connor | Elon News Network
Executive Director Jai Baker stepped into his role at Allied Churches of Alamance County in 2019 after serving as a shelter advocate and case manager.

Allied Churches of Alamance County’s homeless shelters have not reported a single coronavirus case. When he mentioned it out loud, Executive Director Jai Baker said he hoped he wouldn’t jinx it.

“We had a system set in place if individuals in the shelter tested positive ... they will immediately be moved to a location where they could be quarantined and still live safe and fruitful lives, but go through that quarantine,” Baker said. “To this day, we have not had to use that protocol.”

The coronavirus pandemic has posed unique problems to homeless shelters like ACAC, forcing them to reevaluate everything from how beds were arranged to what cleaning supplies could be used in the shelters and how to fundraise virtually.

Listen to this story:

According to data from the National Coalition to End Homelessness, many systems experienced situations similar to ACAC and became overwhelmed by their new responsibilities to create a hygienic environment and a lack of personal protection equipment — as well as other supplies — due to the pandemic.

NCEH surveyed communities across the country in May and July to examine how communities’ Continuums of Care — agencies created by localities in the United States that coordinate housing and services funding for homeless families and individuals — were responding to the new circumstances created by the coronavirus pandemic.

ACAC’s mission is to provide basic needs and shelter, while empowering community members experiencing homelessness to overcome their situation, according to Baker.

ACAC — which is headquartered north of downtown Burlington — operates a perpetually open homeless shelter, an empowerment center where community members can use computers and to search for job opportunities and a community kitchen called Joe’s Diner.

"One of the things that's unique about our shelter is we have been focused on housing — at least for the last four years — where we want it to be able to bring individuals in and rapidly get them out. So, the numbers, although we have served far more people than normal, numbers inside the shelter remain relatively the same."

“One of the things that’s unique about our shelter is we have been focused on housing — at least for the last four years — where we want it to be able to bring individuals in and rapidly get them out. So, the numbers, although we have served far more people than normal, numbers inside the shelter remain relatively the same,” Baker said.

NCEH found in May that 19% of shelters surveyed closed emergency housing and 83% of shelters surveyed reported obtaining hotel or motel rooms for temporary housing. ACAC’s shelter can house 49 men, 24 women and 25 people in the family dorm. ACAC generally operates at about half capacity, serving 40 to 45 people at one time. Because of this ACAC was able to adapt to COVID-19 physical distancing regulations much more easily than a shelter that may have had to reduce its capacity, Baker said.

Baker and staff members make a game out of hand-washing to encourage kids in the family dorm to sanitize and clean. Using the game “red light, green light,” Baker said any staff member can come in and say “red light,” and kids know to wash their hands.

Rather than fundraising face-to-face as Baker had been, ACAC went to social media, posting photos and the shelter’s needs online. The shelter also sends out a monthly newsletter, updating supporters and volunteers on what is changing and being updated.

Social media has allowed for donors and volunteers to stay engaged, Baker said, even from the comfort of their own homes. Through options like the ACAC online Amazon wishlist, community members who want to donate can order items and have them shipped directly to ACAC.

“It’s awesome to be able to put a nice list out on social media and almost instantly start to see those products being dropped off,” Baker said.

On any given day before the pandemic, ACAC would have about 100 volunteers, Baker said. Many volunteers at ACAC are older, and therefore at risk of contracting COVID-19. Because of this, Baker said there are no volunteers at the shelter currently.

Joe’s Diner, part of ACAC, is a sit-down community kitchen located inside the shelter. While the inside dining area is closed for eating, the community kitchen is still available to those in need. Since the pandemic began, Baker said ACAC saw an increase of approximately 40% in meals served. Meals are served in to-go containers, and the dining area now serves as a space for local children to do online learning with stable internet connection.

Many changes, such as the signage around the shelter to remind community members to socially distance, or the temperature check stations, will stay, Baker said

Despite the added challenges, ACAC was able to continue renovations to the interior of their building, an initiative the shelter started in 2018.

The progress and change within the shelter comes just two years after its almost closing.

“That is something that you should be proud of,” Baker said. “I say it all the time, who knew that this little old shelter in Burlington would be able to be recognized as having one of the strongest housing programs in the state.”