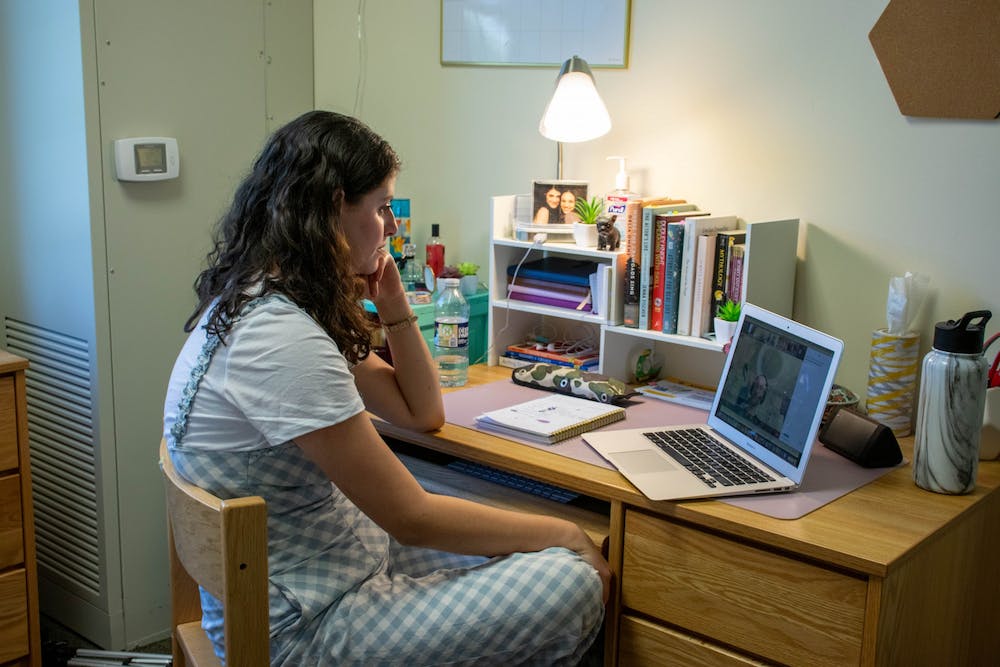 While actors, singers and dancers traditionally aim to provoke emotions in their audience while on stage, this fall, Elon University’s performing arts students must learn to act and dance in a new setting — a virtual one.

Like in Elon’s other departments amid the coronavirus pandemic, performing arts class sizes have decreased in order to allow for physical distancing. Some professors have also chosen to hold lectures online or implement a hybrid approach to their classes — holding half of the lessons in-person and the other half online or splitting their students in each class section in half and rotating the two groups between meeting for classes in-person and online.

Additionally, outside of the classroom, the performing arts department will hold their 10 annual productions online to help limit physical contact between cast and crew members and the audience.

Professor of dance and chair of the performing arts department Lauren Kearns said that unlike many other institutions that chose to cancel their production season, Elon has reconstructed their performing arts schedule and revised certain selections of plays and musicals to allow for the new digital medium.

Nine of these productions will be pre-filmed and released to the public on a set date. The other one — the fall play — will be broadcast to the public over Zoom.

During these productions, dancers will be required to wear masks at all times and stay 10 feet apart unless they are performing a solo number where physical distancing can be maintained. When singing, the actors will wear a face shield and stay 16 feet apart to avoid spreading the coronavirus through the air.

Although these productions are completely different from years prior, Kearns said the industry for online theater and dance is only growing in prevalence, so giving students the experience of performing online is only going to benefit them in the future.

"It's certainly different, the digital theater and the digital dance, but it's not going away. It's like a burgeoning new, new discipline. So we're really looking at this as a positive, "

PROFESSOR OF DANCE AND CHAIR OF THE PERFORMING ARTS DEPARTMENT

“It’s certainly different, the digital theater and the digital dance, but it’s not going away. It’s like a burgeoning new, new discipline. So we’re really looking at this as a positive,” Kearns said.

When the performances are released online to the public, they will be available free of charge. However, at the moment, professor of arts administration David McGraw is still working out details on what method they will use to allow public access to the prerecorded productions to avoid potential privacy issues.

Students auditioned for the annual Dance in The Landscape Concert on Aug. 19 and 20 in a whole new way. Unlike years prior, in order to avoid a large gathering, students were sent a video with the audition choreography and told to learn it outside of the studio.

After practicing at home students signed up for audition time slots online. At their designated times, the dancers went into the audition, waiting six feet apart in the hallway, then dancing 10 feet apart in the studio — all while wearing face masks.

Auditions for the Fall Play, “Pheromone: An Awkward Olfactory Inquiry” are also looking different than past years. In hopes to receive a role in the show, Elon University sophomore Sivan Propper is auditioning for the role of Olive. However, rather than going in front of a casting director, Propper will record herself on her iPhone and submit the tape as her audition. From there, if given a callback, she will then go and perform live.

Filming video auditions comes with pros and cons in the eyes of Propper.

“Auditions have always been in-person. And this is less stressful because you get to self-tape, but at the same time it’s not the same excitement, and good anxiety that fall auditions have,” Propper said.

Actors cast in the play will perform from home during the live Zoom performance using a lighting package and a green screen. While performing on Zoom, the actors will enter and exit the livestream so they can imitate on-stage scene changes in the digital format.

Propper is grateful her classes are in-person,even with the new COVID-19 guidelines. However, she said she misses the community theater fosters through working closely with others. Because contact is limited, she does not feel the full power of connecting with others while performing.

"I love connecting with people on a human level and I think it's so hard online, where we can't even really feel each other's energy."

“I love connecting with people on a human level and I think it’s so hard online, where we can’t even really feel each other’s energy, Propper said, “I personally feel that my greatest work is always on stage when I’m feeding off of the audience, so it’s definitely been hard for me to click into my super inspired actor mode.”

As the semester continues on under these new adaptive circumstances Propper said the best thing she can do is take on her days one step at a time.

“I’m here. I’m still learning. If we do get sent home, then, you know, we’ll cross that bridge when we get there,” Propper said.