Senior Kevin Alvarado splits his time between the Latinx-Hispanic Union, his fraternity and clubs where he DJs 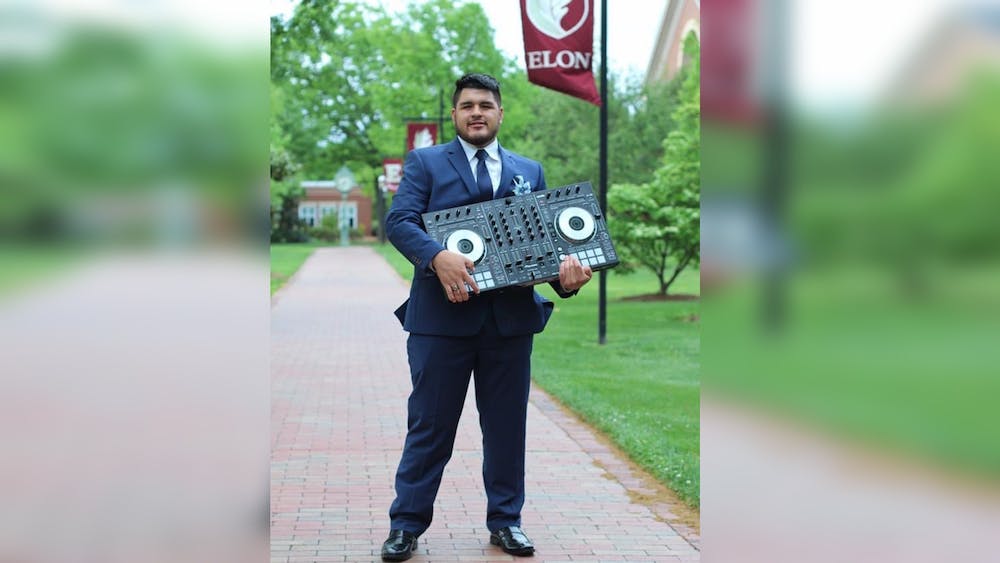 Elon University senior Kevin Alvarado peered out from behind the curtains backstage to view an empty dance floor. Alvarado was set to DJ an event at a nightclub in Chapel Hill. A friend of Alvarado came up to him and told him that the line was looping around the block and the club was at capacity.

A couple of songs into his set, Alvarado — who goes by DJ Alexis while performing — started to play a song by Bad Bunny, a Puerto Rican rapper. Alvarado stopped the song and glanced at his audience, which was continuing to sing without the music playing.

“That moment gave me a nice hype-up,” Alvarado said. “There was no song playing but people knew the lyrics because they were having a great time. That’s one of my best memories; like, all that happened in one little moment.”

As a DJ, Alvarado is able to share his Latinx-Hispanic heritage through playing Latin music at nightclubs in Chapel Hill and Greensboro and for private events such as weddings, quinceañeras — a celebration of a girl’s 15th birthday — and Elon University events.

While music has been a large part of Alvarado’s culture, his family’s roots in Ecuador also have impacted cultivating the person he is today. During his childhood, Alvarado spent a summer with his grandparents in Cuenca, where he was able to immerse himself in the culture of his parents.

One day that summer, Alvarado attended a cultural festival in Cuenca, which was held to celebrate a saint. During the festival, he had salchipapas — a dish of thinly sliced pan-beef sausages and French fries — and met individuals from other barrios in Ecuador. These cross-cultural connections shaped Alvarado’s worldview and inspired him to explore and share his culture locally.

Alvarado’s roots in Ecuador have inspired him to continue sharing his culture with fellow students, faculty and community members through his involvement in the Latinx-Hispanic Union and the Lambda Upsilon Lambda Fraternity.

Alvarado serves as an executive member of the Latinx-Hispanic Union. During his freshman year, he was invited by a friend to several events the student organization was hosting. Through these events, Alvarado became close with fellow students who believed in the union’s mission.

In the spring of 2018, Alvarado decided to apply to be treasurer for the Latinx-Hispanic Union. Being a business major, Alvarado wanted to gain experience in a position where tasks and responsibilities aligned with his major.

Alvarado is also a founding member of the Lambda Upsilon Lambda Fraternity at Elon. As a freshman, he was interested in greek life and wanted to create an organization for other Latinx students at Elon. Alvarado and five fellow students decided to establish a Lambda Upsilon Lambda chapter at Elon, hoping to create a community for Latinx students on campus to become engaged in cultural events.

Alvarado’s involvement with Lambda Upsilon Lambda has allowed him to mentor and tutor students at local high schools, assisting them with schoolwork and college applications. Alvarado has witnessed improvements in the students’ schoolwork and has seen how he can make a positive impact on them.

Despite Alvarado’s study abroad experience in Spain being cut short this past spring due to the coronavirus pandemic, he was able to reflect upon how his experiences shaped his perception of his own culture. He realized the importance of spreading his culture through to other individuals through his involvement with student organizations on campus and service work locally and in the broader Alamance County community.

Alvarado said he has been able to take small niches of Spanish lifestyle, such as family time at the dinner table and preparing food as a family, and implement it into his life in the United States.

“It was just a great experience. I learned a lot from their lifestyles compared to my own,” Alvarado said.