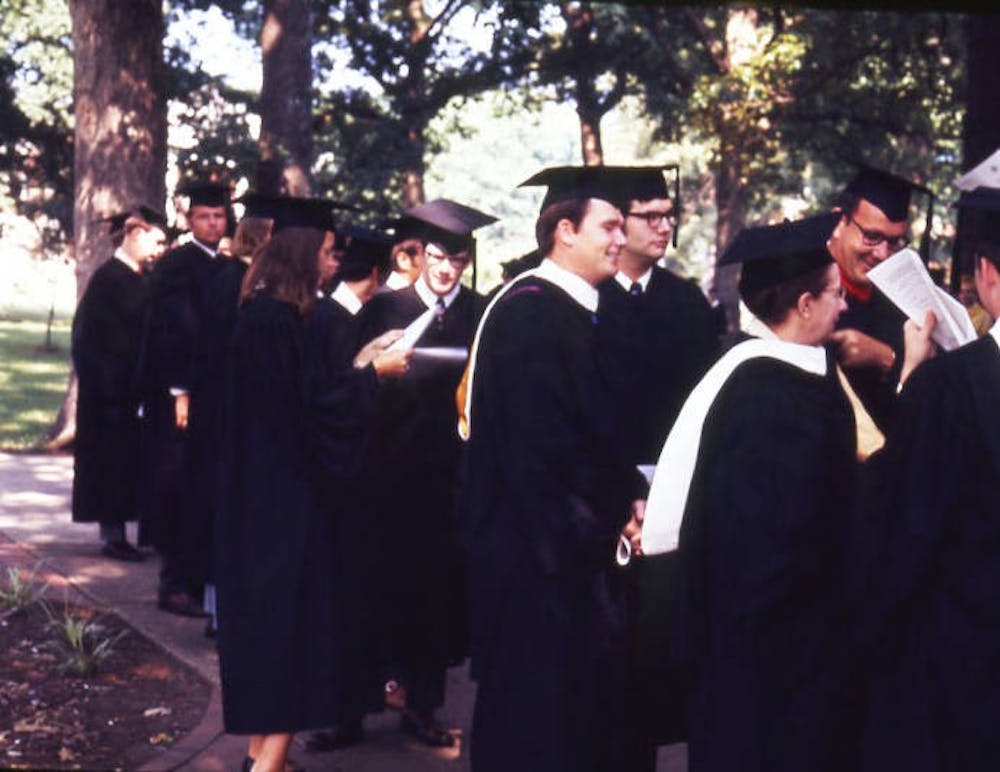 Color photograph of graduating students at Elon University in regalia lined up on the sidewalk while awaiting Commencement in 1970. Photo courtesy of Elon University Archives.

The Elon College class of 1970 is transitioning their 50th class reunion virtual after the COVID-19 pandemic derailed their hopes for an in-person event. As of now, they hope to hold an in-person event in 2021.

The reunion will now take place virtually Oct. 12-18. The logistics of that are still in the works.

For Sally Mauldin, a committee member, the proposition of a virtual event eased her worries of safety due to her compromised immune system.

“I was glad this year was going to be virtual because I wasn’t comfortable at all putting myself in a face- to-face situation,” Mauldin said.

The determining factor in transitioning the event to be virtual was the classmates’ age, according to co-chair Noble Marshall.

"Through process of elimination, we finally came up with the idea that it's really our age that is the determining factor of why we're going to do this virtually."

“Through process of elimination, we finally came up with the idea that it’s really our age that is the determining factor of why we’re going to do this virtually,”
Marshall said.

According to the Centers for Disease Control and Prevention, those in their 60s or 70s are at a higher risk of contracting the virus.

“I did interview several of the previous committee members so that I had a sense of what people really enjoyed and maybe some things they wish would’ve been longer or not at all,” McConnell said.

Committee members began discussing a virtual event in April after Elon University students were sent home for remote instruction. Once that discussion occurred, the committee decided on a weeklong virtual event, according to Mauldin.

Once the committee determined that the event had to become virtual, they began calling classmates to make sure their email addresses were updated on file and that they would be interested in attending a virtual event.

Another committee member, John Paisley, is focused on calling classmates and planning a physical event for 2021.

“I’m talking to classmates about things like what we plan to do [and] the fact that we probably will have a physical meeting in 2021 with a Homecoming game,” Paisley said.

According to McConnell, the planning process continued as if it were going to be an in-person event.

“Our committee felt strongly that we want it on campus,” McConnell said.

Previously scheduled events were an award ceremony, a bus tour of campus, a concert, a breakfast with a tailgate, a Homecoming game, a cocktail party and a dinner. The final day's events had not yet been finalized.

The committee is working collaboratively to come up with virtual ideas to make the reunion engaging. Some of the suggestions for the virtual event are a virtual 5k with details to be determined, a virtual tour of campus catered to the class, a virtual tailgate and a virtual town hall.

The committee members have made phone calls to classmates to gauge interest in virtual reunion events. Every participant will have to pay a registration fee, but that cost is still to be determined, according to Mauldin.

According to McConnell, there were challenges with the virtual meeting process, but they did not derail the planning.

“We’re not a group that is very savvy with technology, but we figured it out. It has worked really well and everybody has felt comfortable in expressing themselves in what they would like to see done, ” she said.

The 50th reunion committee means once a month virtually and are engaging classmates through sending videos of committee members.

Since the time of the class of 1970’s graduation, Elon has become a university and added a law school.

Elon College, now Elon University, has made developmental changes in the student experience. As McConnell notes, the first study abroad opportunity was when she went to England in 1968 during January. Since then, Elon University has been ranked number one in study abroad.

Furthermore, there used to be a wall surrounding the exterior of campus, the student population has tripled, more majors have been added. There were also no co-ed dorms, girls had check-in and check-out times if they were going anywhere besides class or the dining hall, and freshmen had mandated study times.

According to Paisley, there were approximately 250 to 300 students in his graduating class, and seven became lawyers. More than 1,400 students graduated this past May.

Lee Farmer, a class of 1970 alumnus, planned to attend the in-person reunion. He said he's seen the growth Elon has made.

“It has made a major change academically, comprehensively and athletic[ally] since I was there,” Farmer said.

While the virtual events are still being determined, there will be continuous engagement for the class of 1970 throughout this year.

“We’re going to try and do the best we can with it and make it as positive a situation as can be done. We understand what we’re up against, but we kind of like the challenge,” Marshall said.