As the movement against police brutality and racism continue amid the coronavirus pandemic, Black students, faculty and staff find ways to maintain good mental health 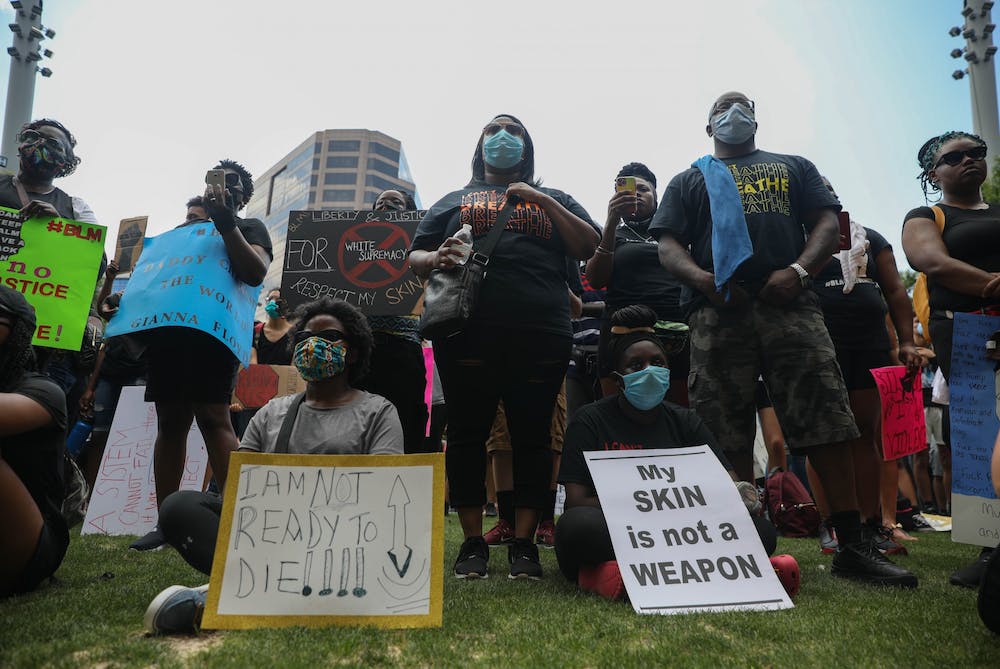 After watching protests for Black Lives Matter and the arrest of Black reporter Omar Jimenez on television, Amaya Gaines, who identifies as Black, began to feel the increased coverage of the movement against racism take a toll on her mental health.

“Every day with something negative, it starts to put in your mind, ‘is there a solution to this? Is there a light at the end of the tunnel?’” Gaines said.

“This anxiety was brought on by the constant thought that you can be profiled, harassed, and mistreated simply based on your identity,” Gaines said.

Anita Hodnett, assistant director for counseling services, said in addition to the uncertainty students are facing from the coronavirus pandemic and the impending return to campus, similar to Gaines, many students are also experiencing negative emotions due to racism and racial injustice, highlighted most recently in police brutality. Hodnett — who is dedicated to supporting the mental health needs of students of color — said maintaining one’s mental health is not a given at any one time; on a day-to-day basis it requires “intentional effort,” such as keeping up with a routine, exercising or taking a step back from social media, to have good mental health.

“To maintain your mental health right now is definitely something that can feel like a challenge, and I feel like one has to put in even more effort to just push through everyday life,” Hodnett said.

According to the Centers for Disease Control and Prevention, Black people have a rate of hospitalization for the coronavirus five times higher than white people. As Black people are disproportionately impacted by the coronavirus pandemic, states and municipalities across the country are officially declaring racism a public health crisis, acknowledging racism and racial injustice as akin to a second pandemic.

“The pandemic of COVID itself is not biased, or racist or homophobic or xenophobic or anything like that,” Randy Williams, vice president of inclusive excellence said. “But the systems that we have are. When you have a pandemic, it will expose those oppressions within our systems.”

As a counselor, Hodnett, a Black woman, strives to support the unique mental health concerns of underrepresented populations on campus. Hodnett related the experience many students may have watching the news to a horror movie, the physiological responses one’s body can have, or the psychological responses one can feel.

“Take that and cut to things that are not fiction,” Hodnett said. “These are real people who are losing their lives, and you lose that distance because this is what's happening in your actual reality. This is not just a horror movie that you can turn off and forget.”

Assistant Director of Student Care and Outreach Harry Titus said watching the news and staying informed is one way he feels able to support students, but he tries to take time to disengage for his mental health, as well as keeping up a routine while working from home.

“I just don't have that privilege as a Black person to truly disengage for a long time because students need me, family members need me, peers are calling on me in my life,” Titus said. “It's very difficult right now for Black and brown folks to disengage or remove themselves from what's happening outside of our homes because it's impacting all parts of our lives.”

Staying informed and spending more time on social media has been part of Dani Toma-Harrold’s quarantine routine. The sophomore, who identifies as biracial, said while she has had positive experiences throughout her increased time on social media, such as connecting with other women of color at Elon University, the pressure to stay informed and “pressure to post” can be overwhelming.

“I think it’s doing your part to get all that information out there and be very vocal about your opinions,” Toma-Harrold. “But I think it gets very overwhelming very quickly … I definitely feel a pressure to stay informed and knowledgeable.”

Hodnett said with many students increasing the amount of time they are spending on social media during the pandemic, it is important to set boundaries.

To maintain her activism, Gaines said she had limited her exposure to videos depicting violence against Black people, such as the one released following the murder of George Floyd, a Black man killed by police in Minneapolis in late May.

“The way that those things distract you, and they drain you… they draw you away from things you're passionate about,” Gaines said.

The impact of racial trauma

Racial trauma can be the result of major experiences, such as racism or discrimintaion that exists in the workplace and hate crimes, but it can also be the accumulation of smaller events, such as daily microaggressions. This collective trauma is something social worker Camesha Jones has seen increase during times of racial injustice and unrest.

As someone who says she's a mental illness survivor, Jones is also the founder of Sista Afya, a community wellness initiative based in Chicago. Jones said students at predominantly white institutions like Elon can feel isolated and misunderstood and experience microaggressions related to their identities, which can make it challenging to “to be mentally well and perform well academically.”

“The more spaces where Black folks feel included and genuinely appreciated on campuses, the better their mental health outcomes may be,” Jones said.

Gaines said having spaces where Black students feel represented, heard and respected for their experiences is crucial. As a Black woman, Gaines said she often finds herself as “the strong one” in a friend group, an experience she also had in high school.

While Hodnett said she wishes she could say “do this” and then students will start to heal and recover from racial trauma, working through one single event that caused this trauma is a process, as it is “deeply rooted in our core beings.”

“It’s impossible for a person’s identities not to play a major part in mental health and their mental health care,” Hodnett said. “Our identities that we hold impact so much how we experience and engage in the world around us, how the world engages with us.”