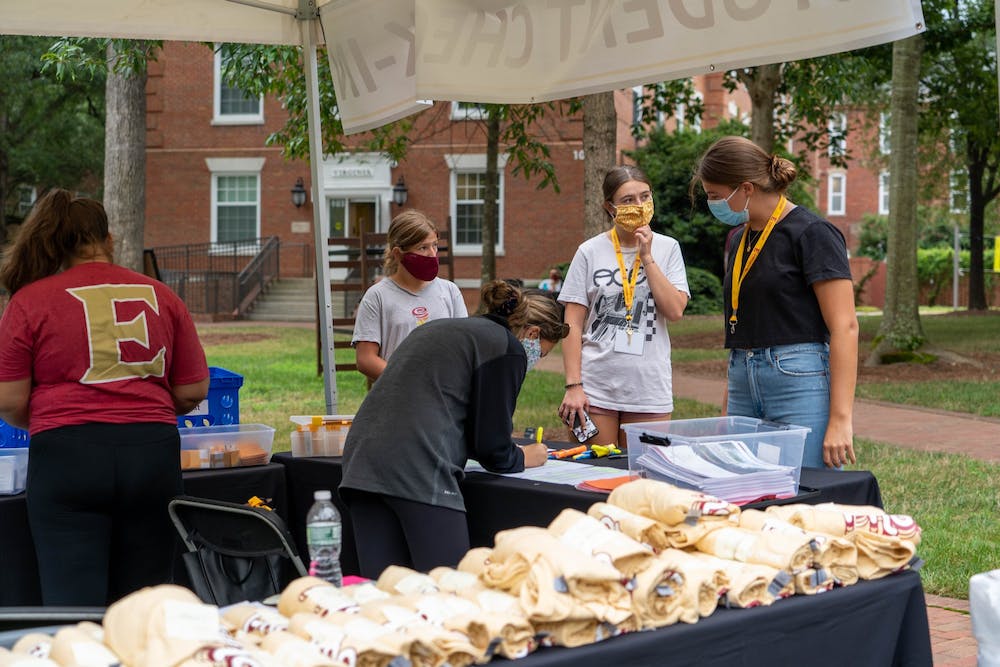 Photo by Clare Grant | Elon News Network
Freshmen checking into their dorms for the first day of move-in on Aug. 14, 2020.

Halfway out the door to head towards campus, Zane Jackson runs through his mental checklist. He has his phone, pencils, Phoenix Card and computer packed in his bag. Just before he turns to lock his dorm door, the absence of a mask becomes apparent to him, so he turns back to retrieve one. On top of different challenges from the pandemic, the necessity to follow Center for Disease Control guidelines diligently at all times indicates how the class of 2024’s freshman fall semester will differ from previous classes.

With an enrollment number of 1602 students, the class of 2024 is the third-largest class to have entered Elon University. Compared to last year, there are 57 fewer students on campus for fall semester. Greg Zaiser, the vice president of enrollment, said he found that notable considering the COVID-19 pandemic.

Zaiser also said that the class of 2024 is academically strong and diverse. Psychology is the most popular major among the class. Jackson, however, currently is undecided and plans to weigh his options by exploring different classes.

“I am nervous about starting college during a pandemic because there is just so much I don’t know, but I think that would be true even if there wasn’t a pandemic right now,” Jackson said. “Pretty much everything about college is new to me, so the pandemic just adds in a couple extra steps and uncertainty.”

First-year students like Jackson share feelings of anxiousness and confusion towards beginning college. They are now not only troubled by the spread of COVID-19 but also by new social hurdles and online classes.

“I don’t know about all my classes yet, but my chemistry class is at least partly online,” Jackson said. “I think this would hinder me because I enjoy learning face-to-face and the sense of community that comes along with it. If classes are online I tend to lose motivation because instead of focusing on learning my perspective switches to just work for a grade.”

Another hurdle that freshmen face is to navigate social life at Elon at a distance.

"I am nervous about starting college during a pandemic because there is just so much I don't know, but I think that would be true even if there wasn't a pandemic right now. Pretty much everything about college is new to me, so the pandemic just adds in a couple extra steps and uncertainty."

In an effort to combat this challenge, the university is offering virtual events for students and faculty to stay connected. Events such as College Coffee, webinars and group exercises can be accessed through the school website.

While Jackson does not have his sights set on a particular extracurricular activity yet, the cancellation of the Fall 2020 cross country season affects his fall semester.

“I was looking forward to competing at the huge meets like the ones I’ve been watching online since I was middle school,” Jackson said.

Despite the cancellation of competition, athletes are still expected to practice for the following season with an adjusted schedule. However, expectations for the fall semester among students and faculty change everyday.

“We will be socially distant in practice. Right now we split up into smaller practice groups of around four people based on who lives together and we won’t be using the weight room this season. In a couple weeks we might transition back into a full group for practice based on how the virus is contained,” Jackson said.