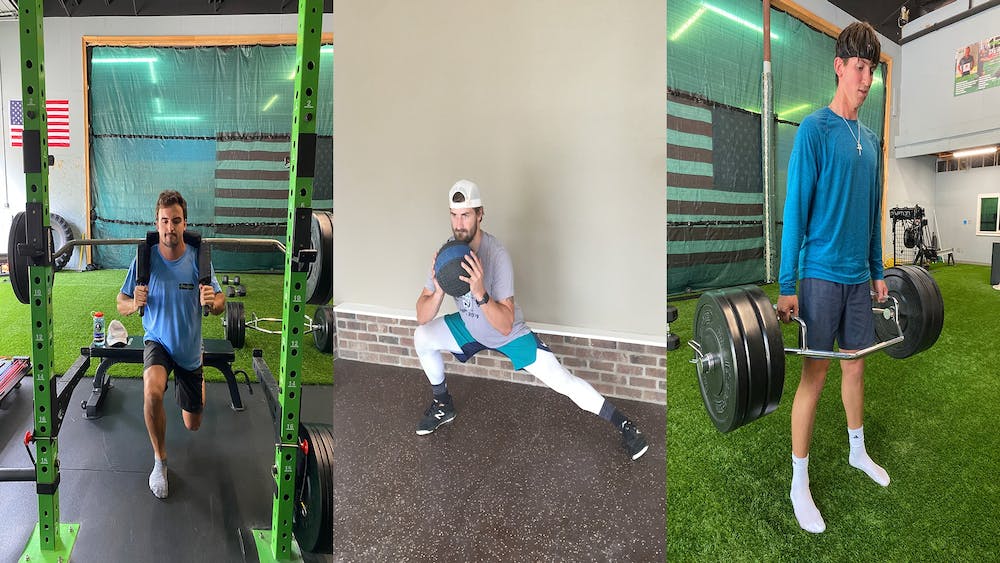 Due to the coronavirus pandemic, multiple professional sports have had their seasons put on hold, including MLB's and Minor League Baseball’s 2020 season. Multiple former Elon University baseball players occupy various levels of the minor leagues and have been sent home by their respective organizations. These former Phoenix-turned-minor league players are scattered in various parts of the country, looking to make the best of their current situations.

On March 12, MLB issued a press release announcing the cancellation of the remainder of spring training, as well as delaying the start of the 2020 season. On the same day, Minor League Baseball, also known as MiLB, issued its own statement, delaying the start to its season.

For the former Phoenix baseball players in the minor leagues, the delayed season has impacted them in different ways.

After being drafted by the Seattle Mariners in 2016, former Elon utility player Nick Zammarelli spent his time working his way up through the lower levels of the minor leagues. In nearly 400 games over four seasons, Zammarelli produced a .275 batting average while cranking 30 home runs. On May 28, Zammarelli was part of a round of cuts by the Mariners organization.

WPRI-12 News reported that Zammarelli is continuing to work with his personal trainer while he searches for his next team. Zammarelli also told Elon News Network that he is trying to use this opportunity to take a break from baseball while maintaining his regular workouts.

“I need a mental break from the game. I’m still swinging it a few times a week,” Zammarelli said. “And then like after the Fourth of July, I’ll pick it back up and try and get in game shape or practice shape. That way, I am ready for the fall and I’m ready to sign with a new team.”

After talks with his agent, Zammarelli said he will have to play the waiting game when it comes to finding out which uniform he will put on next.

“I’ve talked to my agent about this a lot. And basically, it’s just a dead period right now,” Zammarelli said. “There’s no baseball to even sign for right now. So we don’t expect any kind of contact or interest to really happen until the fall.”

Despite taking a break from the game, Zammarelli said he is definitely not through with pursuing a career in baseball, and he is not letting his release keep him down.

“I’m just gonna to keep doing my thing. I know I have a lot more in the tank and I know I’m ready for whatever next team wants me,” Zammarelli said.

Developing skills and staying in shape

For minor league baseball players, development is a big part of their experience. Former Elon infielder Cam Devanney hit the ground running in his development after being drafted by the Milwaukee Brewers in the round 15 of the 2019 MLB Draft. In 61 games last season between two levels of the minor leagues, Devanney put together a .286 batting average.

Devanney said one of the biggest adjustments for him has been transitioning from the atmosphere of college baseball to the atmosphere professional baseball. However, the pandemic has added a new dimension of difficulty to this transition.

“The big thing with baseball is just getting reps and experience. Obviously, the jump is pretty different in terms of atmosphere,” Devanney said. “You go from college where you’re not really playing in front of anyone. It’s more about the team camaraderie and now it’s the business of baseball.”

Since Devanney and other minor leaguers will be missing out on in-game experience in 2020, he said players will have to make up for lost time when it comes to their development and adjusting to life in the pros.

“It’s going to force us to gain that experience quicker. We’re just going to have to grow quicker than we really should have to, but that’s unfortunately what comes with missing an entire season like this,” Devanney said.

"I am a huge competitor, and I love the game, like a game atmosphere or competitive atmosphere.It's hard to find that while I'm at home, living with my parents, and I don't have the resources that I usually have to lift, to throw. I'm not around a group of guys that are on the same mission as me, or their goals aren't aligned with me."

For Seattle Mariners prospect and former Elon pitcher Ty Adcock, it is difficult to miss out on the competition that comes with playing in game situations.

“I am a huge competitor, and I love the game, like a game atmosphere or competitive atmosphere,” Adcock said. “It’s hard to find that while I’m at home, living with my parents, and I don’t have the resources that I usually have to lift, to throw. I’m not around a group of guys that are on the same mission as me, or their goals aren’t aligned with me.”

For other Elon minor leaguers, their situations grant them more resources when it comes to facilities and other players to work out with. Devanney and former Phoenix pitcher Kyle Brnovich are both in Georgia where they work out together regularly.

“Staying in shape hasn’t been too much of a struggle for me. I’m really fortunate with where I live in Georgia, where there’s just so much baseball. It’s almost like the baseball hub of America,” Brnovich said.

Former Elon pitcher Ryan Conroy currently lives in Englewood, Florida and has been utilizing nearby facilities while his current organization, the Baltimore Orioles, remain in contact with him about his training.

“Where I specifically live, there’s not that much. Obviously being in Florida, it’s still a hotbed for baseball, so there’s definitely opportunities to be found,” Conroy said. “I’ve been lucky enough to have old coaches who have facilities that let me come in and get my work in and throw against their guys.”

When it comes to finding ways to stay in shape, Devanney said creativity is an important factor.

“It has been an interesting experience. Even in the offseason, it’s a lot easier to get in and get work and have a routine, but now it’s become a bit more challenging,” Devanney said. “You have to get a little more creative with how you go about training basically.”

For one former Elon player, the delayed season allowed him to explore new interests with his free time. Prior to the start of 2020 spring training, former Elon second baseman Ryne Ogren said he had some extra time on his hands. As a result, he said he began to work on projects around his house, which led to him taking up woodworking.

“I wanted to heal the body before this long season up ahead. I decided I had some extra time, so I decided to start learning some new trades,” Ogren said. “Started doing some work around the house. Started sanding a table and refinished that, and learned how to do that, and eventually started building stuff.”

Had the opportunity to refinish this table. Really proud of how it came out!! Dm if you want it!! #wood #andStain

After spring training ended abruptly and the infielder was sent home, Ogren said he continued to work on projects in between his workouts.

“I started learning how to woodcraft and work in the woodshop. So I started making cornhole sets and other projects just to pass the time and started to sell those to make some extra income,” Ogren said.

Ogren said he has completed roughly 50 projects during the delayed season. Ogren also said that he enjoys this activity because it is more challenging than spending his free time watching Netflix and provides a good escape for him.

Brnovich’s and Adcock’s last competitive baseball game was played as a Phoenix when the two participated in the 2019 Colonial Athletic Association Championship tournament.

Both players were drafted in the eighth round of that year’s MLB Draft. Adcock was drafted by the Seattle Mariners, and Brnovich was drafted by the Los Angeles Angels, then was traded to the Baltimore Orioles during the offseason. Rather than making the jump to the minor leagues after the draft, both players did not play the remainder of the season.

While it has been over a year since the last time Brnovich has played in a game, the Georgia native said he is trying to remain positive in the midst of the delayed season.

“I’m so fortunate that it’s hard to sort of dwell on that, but as far as the playing goes, man I wish more than anything I was playing right now,” Brnovich said. “I just think the biggest thing is keeping a positive mindset and realizing that eventually someday I’m gonna play. Whether that’s tomorrow or next spring training.”

As the delay continued to extend for Adcock, he said that his focus began to wane. Adcock is currently residing in Oxford, North Carolina while he works to stay in shape, which he says provides its own set of challenges.

“It’s not saturated with professional baseball players by any means. So it’s hard because I kind of get wrapped up in the home life or the life outside of baseball. So I’ve kind of gotten disconnected,” Adcock said.

At one point, Adcock said that he took a week off from baseball, but it was self-reflection that got him out of his lull.

“I just asked myself in that rut, that week time period where I took off. I said, ‘Why am I in professional baseball? Why are my actions not aligning with my goals or my why?’ And that’s kind of when everything cleared up for me,” Adcock said. “And I was like, ‘Okay, well, now I need to get back on track, get back on the bus and get going and stop drifting away from baseball.’”

When the time comes for Brnovich and Adcock to take the mound again, both of them describe different goals and emotions they anticipate they will experience. For Brnovich, that moment will be about regaining his competitiveness.

“It’s gonna be a relief because the biggest thing for me is that I’m a very competitive person, so finding that way to stay competitive, and stay with that competitive mindset has probably been one of the harder parts,” Brnovich said. “It’s just finding new ways to do it, but once we’re back playing, it’s going to be a relief.”

For Adcock, he said he will feel thankful for the opportunity to play baseball again.

“Just being thankful to be back on the mound and being on a diamond and having to play the game because sometimes you take it for granted and you don’t realize how much it means to you, or how special it is until it’s taken all away,” Adcock said. “And I think this pandemic has done a great job of doing that. Just shedding some light on the important things and what you really should be worried about.”