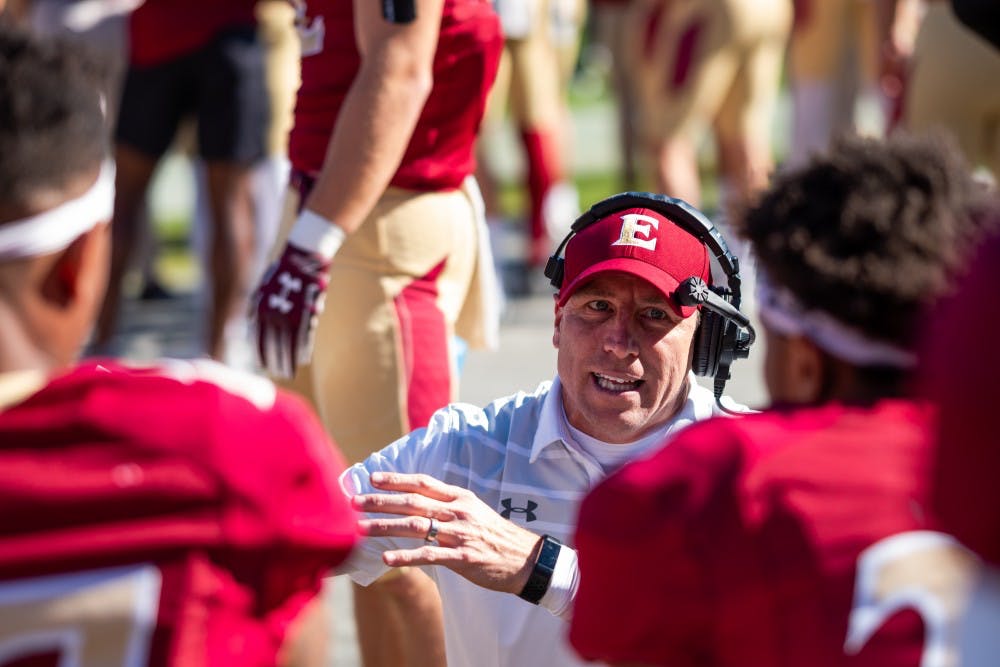 Photo by Liam O'Connor | Elon News Network
Defensive coordinator Tony Trisciani talks strategy on the sidelines of the Homecoming game against the University of Rhode Island on Saturday, Nov. 3.

Correction May 25 at 1:36 p.m.- There will be three other current members of the team who will be fighting Turner for the starting spot: returning starter Ryan Wilkins, freshman Will McCoy and redshirt freshman Carson Crisp. Elon News Network regrets this error.

Football head coach Tony Trisciani and his assistant coaches have been preparing for their 2020 recruitment class for over a year, but none of them were expecting the preseason to go quite like this. The original 20 member class has since grown with additions, but so have questions over whether the NCAA will permit college-level sports to play in 2020 due to the coronavirus pandemic.

Trisciani and the rest of Phoenix football are preparing for the season to commence, hoping to see their year of work put to the test on the field.

Trisciani and his staff have been working with these recruits for over a year, following a “roster plan” as well as a “scholarship plan” to direct them in their recruiting process. Trisciani said the process starts with how many scholarships they can offer to each side of the ball — offense, defense and special teams— and then specify to positions.

One of the gaps in the Phoenix roster was in the tight end position. The team lost four senior tight ends last season: Alex Aiello, Alex Parker, Chris Rowe and 2019 First Team All-CAA honoree Matt Foster. Donavan Williams, an incoming graduate transfer from the University of Connecticut, has the chance to fill in those gaps alongside four other teammates.

“He’s an athlete,” Trisciani said of Williams. “He was a high school quarterback and played quarterback at UConn before they moved him to tight end. He’s picked things up quick and he’s brought some maturity to the position, which is very important.”

Trisciani spoke highly of the incoming members, but said that some of them will have to face the in team competition to earn a starting position.

“Cameron Orr is an offensive tackle and he’s competing for a starting job there with two redshirt freshmen, and Cooper Cromer, who is a returner, who missed last season due to injury,” Trisciani said. “We’ve got a lot of competition in that offensive tackle spot and it’s a critical position for us, so that’s good.”

Also mentioned was long snapper Noah Turner, a transfer from Wake Forest. There will be three other current members of the team who will be fighting Turner for the starting spot: returning starter Ryan Wilkins, freshman Will McCoy and redshirt freshman Carson Crisp.

Eight players of the original 20 recruited are from North Carolina. Trisciani said they do prefer recruiting “inside out in North Carolina” due to the advantage of seeing the player multiple times.

“If we have two kids and they’re the same player and one’s in-state and one’s out-of-state, we’re gonna recruit a kid in-state that we likely know more about,” Trisciani said. “When you get a chance to evaluate a kid live at your camp or you’ve been following them through their high school career, and you have relationships with their head coaches who come over to practice and maybe visit your facility to talk football, you just make less mistakes that way.”

As life has changed for all of athletics due to pandemic restrictions, Trisciani and the position coaches have adjusted the way they communicate with their players. He said the team will have Microsoft Team meetings regularly, and their incoming freshman day will be held virtually. The recruits went through activities of orientation nature and were introduced to the academic support offered by the university along with the athletic ones.

"They've worked so hard to be college football players. So I think they're just excited and anxious to do it."

On May 20, the National Collegiate Athletic Association announced on their website that Division I football and both men’s and women’s basketball will be permitted to return to campuses on June 1 for voluntary practices. These practices will only be permitted if “local, state, and federal regulations are followed”. The decision to practice on campus is left solely in the hands of the student-athlete.

Before this decision was made, Trisciani said that in some of the virtual meetings with the players, he didn’t sense any nervousness among the group, more so anxiety.

“They’ve worked so hard to be college football players. So I think they’re just excited and anxious to do it,” Trisciani said. “On a virtual meeting with our other players, we’ll use a lot of that time to just let them get to know each other. They’ve had interactions with our players on their visit or multiple visits to campus, but it’s good to just let them talk and enjoy some company with each other and see somebody else’s face and get to know each other.”

Trisciani and the Phoenix will continue to work and prepare for their season. They are currently scheduled to begin their season on Sept. 5 against The Citadel.