Elon University football’s Greg Liggs, Jr. was one of many FCS players that lost valuable face-time with NFL scouts and coaches due to COVID-19 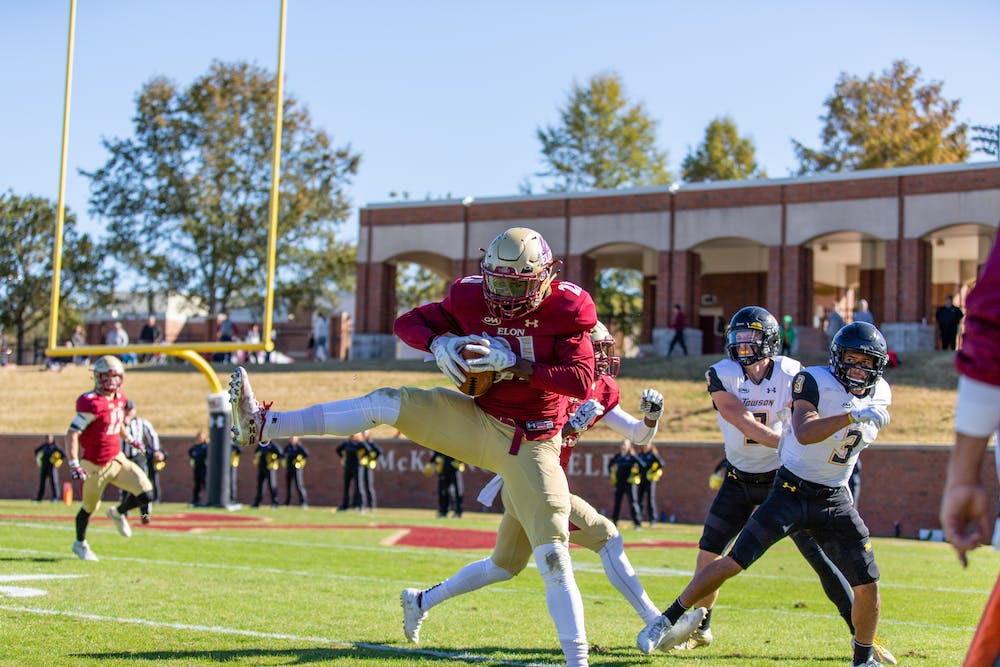 For an NFL draft prospect, watching the draft is a waiting game.

Everything former Elon University defensive back Greg Liggs, Jr. worked and dreamed for was about to be laid out right in front of him.

Liggs sat in his Greensboro home with his family, eyes on the television waiting to hear his name called during the 2020 draft.

As the seventh round came closer, it became clear an unprecedented pandemic could hinder every draft prospects’ chances of getting a contract. Coronavirus proved unmatched to smaller Division I football programs. Most schools’ pro days - when NFL scouts get to see players workout - were cancelled, hurting opportunities for players, like Liggs’.

“It was kind of upsetting during the draft that all those calls disappeared and as the draft started to wind down, still nothing,” Liggs said. “I watched the draft with my family. We watched every pick and when you're sitting there glued to the TV, it was exciting… but there's no success without a struggle, so that's my struggle and I’ll always have that story to tell.”

Leading up to draft day, Liggs received recruiting calls from scouts, giving him some hope that he would hear his name called or sign with a team. As the weekend went on, the realization set in that all he worked for wasn’t going to pay off this time around.

When Liggs and his youth football team won the national championship when he was 10-years-old, the Elon standout knew he had a winning mindset.

“The game has given me so much over the years,” Liggs said. “It's kind of shaped me to be the person I am.”

After the 2019 season, Liggs decided to train for the 2020 National Football League draft. He packed his things and moved to New Jersey where he trained at football training facility TEST Academy. Elon was scheduled to have a combined pro day, a day where NFL scouts test draft prospects on different skills, with other schools at Wake Forest University. Many pro days, including Elon’s were cancelled due to coronavirus concerns, but Liggs continued to train and recorded a virtual pro day so he could still have his chance at the league.

“We realized this could have been our only shot to put on our best performance and at the end of the day, you never know who was watching,” Liggs said.

Josh Buchanan, a contributor for Phil Steele magazine and co-creator of draftscout.com, said the virtual pro days were not as effective as being able to physically be seen by scouts.

“How do you know for sure they stack up?” Buchanan said. “When you're getting paid a lot of money, do you want to put an investment in a guy and pay that guy a lot of money if you don't know for a fact that he can [stack up]? You can feel that he can, but… they want to see you.”

An NFL scout said the virtual pro days aren’t as accurate as when scouts run the tests. Whether the numbers recorded were taken into consideration or not depended on if the scouts trusted the trainer running the pro day.

Liggs’ eight interceptions in 2019 put him among some of the nation’s best Football Championship Subdivision players. He earned the Colonial Athletic Association [CAA] Defensive Player of the Week award in October after intercepting three passes against University of Rhode Island, and holds Elon's Division 1 team record for most interceptions. But, Liggs didn’t always experience success. A previous injury kept him off the field for the end of his freshman season and the entirety of his sophomore season.

“That dormant time, sitting out watching us play and not being able to be on the field… taught me… that everything happens for a reason, everything has its own timeline,” Liggs said. “God has a plan and you just have to be patient.”

After his injury, Liggs set out to make himself better. He redshirted his third year, leaving him with another year of eligibility after the 2018 season. So, he decided to do his fifth season in the fall of 2019 and to pursue his dream of making it to the league.

“I knew I had to get focused and begin to take my mind, body to the next level, like get bigger, faster, stronger,” Liggs said. “Things that we've been saying forever, but now you have to learn how to do it on your own, be more independent and gather the tools to do so.”

As he started his fifth and final season, Liggs relied on his family’s support, as he always has. He said his NFL dream is not only for himself, but for the betterment of his loved ones.

“I feel like when I do something good on the field, it allows my family and friends to feel like we all are accomplishing [something] and that goes vice versa,” Liggs said. “When they do good in life, I feel like I'm winning.”

This year, only six FCS players were drafted out of 255 picks, compared to 13 in 2019 and 19 in 2018. Usually, other FCS players sign to a team as an undrafted free agent, and some get to try out through teams’ rookie minicamps, where coaches can evaluate players without a contract.

Elon had six 2020 draft prospects: Liggs, defensive end Marcus Willoughby, tight end Matt Foster, wide receiver Cole Taylor, running back De’Sean McNair and defensive back Daniel Reid-Bennett. Willoughby, who finished the 2019 season with 65 total tackles and seven sacks, is the only one who received a contract, signing with the Baltimore Ravens as an undrafted free agent. Since joining the Division 1 ranks, only three Elon players have been drafted.

Just over 70 FCS players were drafted or signed in 2020, almost 100 less players than 2019, when about 180 FCS players either were drafted, signed or had a tryout. Rookie camp cancellations hurt players like Liggs, who otherwise would’ve had a chance to show their skills.

The inability to see FCS players in person impacted who was drafted and signed, multiple NFL scouts said. The cancellations of rookie camps and local days, when teams bring in players to facilities, also hindered the numbers this year.

Experts also credit the NCAA Transfer Portal as a reason for the decline in FCS draftees. As FCS players graduate, they decide to use their fifth-year option at high-caliber FBS programs , like Clemson University or University of Alabama. When those players are drafted, they are considered to be FBS players, even though they started at the FCS level.

While there is never a guarantee that FCS players will be signed or drafted, scouts are positive the numbers will increase again in the 2021 draft.

The work is not over yet

Despite a draft weekend that left Liggs heartbroken, he said this is not the end of his football career.

“It’s one of those moments just to add to your story and get humble,” Liggs said. “You move on and grow with it.”

Once coronavirus regulations in the NFL are lifted, Liggs and his agent hope to travel to workout for different teams. This will give him the chance to get physically looked at by scouts, something that was taken away from him and so many others.

“Each day I go work out and make sure I don't take any days off because at any given moment, that call could come,” Liggs said.

Liggs graduated from Elon in 2019 with a degree in business. As for what comes next, he said he is preparing for anything.

“I know everything happens for a reason, so I feel like when the time presents itself I’ll just make sure I’m ready,” Liggs said. “Whether that's work, whether that's football, whether that's moving and getting a job, I'll make sure it's something that I enjoy and I can have fun doing.”