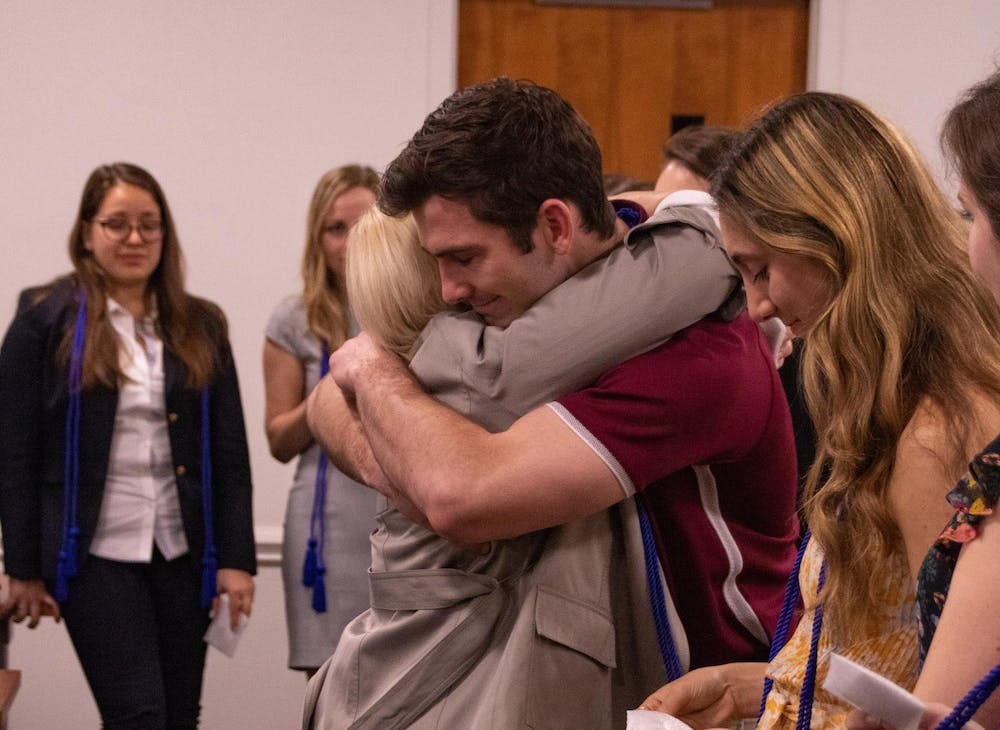 
Jana Lynn Patterson, associate vice president of student life and SGA faculty advisor, hugs former Executive President Jack Johnson at the final meeting of his administration on March 12. The inauguration date of the new executive council was moved up due to in-person classes being suspended.

Back in March, senior Jack Johnson thought he still had a month left as executive president of the Student Government Association. But that was cut short by spread of the coronavirus and Elon University’s decision to end in-person classes and postpone graduation as a precaution.

Junior Robbie Miley, SGA’s current executive president, and the rest of his board fully transitioned into their new roles March 31. Originally, the executive board was to be sworn in on that date at the Leo Lambert Awards, but their inauguration came early. They were sworn in the week before spring break and the former executive board prepared the new leaders for their role.

“When I decided to run for office, no one knew the impacts the coronavirus would have on our campus and our world,” Miley wrote in an email. “This role has a really steep learning curve, and the coronavirus has not made it any easier, but I’ve been really lucky to have been surrounded by an amazing group of people to help me as I transitioned into this new role.”

Johnson said he “has nothing really official to do” right now other than continuing to help individuals like Miley finish the school year smoothly.

“There's really no one I can talk to that has been in a situation where not only are they out of office, but they're out of school and so that has been a little bit of a shock,” Johnson said.

While Johnson said the abrupt end to his final semester at Elon is unfair, he believes the Class of 2020 shouldn’t let their best memories and moments from Elon be overshadowed by the coronavirus. When looking back on his time as executive president, Johnson said his biggest personal accomplishment was passing legislation offering discounted Uber rides to students.

“When we finally got it done, Dean Patterson actually gave me the contract in a little baggie, so I could frame and so that’s going on my wall in whatever apartment,” Johnson said.

However, SGA is putting a “temporary hold on implementation” of the program because of the coronavirus.

One of two pilot programs to test the discounted rides was set to begin the weekend after spring break. But according to Johnson, the pilot program will not begin until North Carolina Gov. Roy Cooper rescinds his stay at home order and on-campus classes are back in session.

“We don't want to have a service that's running and ferrying people to illegal large events,” Johnson said.

For the pilot program, SGA originally allocated $30,000 to cover the rides until the end of the spring semester and $40,000 for the fall semester. SGA and the Elon administration are currently in communication with Uber to help sort out the program launch and reallocation of funds. Johnson did not provide a timeline for the second period of the pilot program but said the full $70,000 would be put towards the program.

“I’ll come back for Homecoming and take a ride with them then,” Johnson said.

Johnson said he is proud of how his executive board completed the transition to the organization’s new structure. Changes included a new plan for homecoming and integrating new SGA positions into their roles. One of Johnson’s favorite changes this year was the new treasurer’s manual that Amanda Yaffa, the former Executive Treasurer, helped students on campus understand.

“Organizations were terrified of this plan about a year ago,” Johnson said. “I helped with getting that bill passed, and I'll be honest we were pretty strong-handed in getting the votes together and kind of pushing it through because we knew it was going to be the best outcome, but people weren't bought in. Amanda made sure people were bought in.”

Regarding his regrets, Johnson said he did not do as much student outreach as he wanted to while in office. Johnson referenced former-Executive President Kenneth Brown Jr. ‘19, saying he did a better job reaching out to students.

“I’m a little bit more technocratic, and Kenneth did a much better job relating to people and meeting people where they were, and that's an ability that I think I definitely could have improved upon, and I think Robbie will do a good job with,” Johnson said.

The transition to Miley’s leadership, as unexpected and fast as it was, was handled well, Johnson said.

Miley said he feels lucky to be surrounded by his fellow officers and senate who have stepped up to be the “leaders that our campus needs right now.” Miley said that while these individuals aren’t necessarily always in the spotlight, their work, along with the help of Johnson, made a huge difference in the transition.

“After I won the election, I talked with Jack Johnson almost every day for the three weeks straight, including spring break,” Miley wrote. “He’s done a lot to make this transition as smooth as possible, and I’m really thankful for that.  Although I don’t talk with him every day now, he’s made it clear that I can always go to him if I ever need anything.”

While the decision about when students can return to campus is up to Elon’s administration, Johnson said it’s SGA’s responsibility is to make sure students feel comfortable during the transition to what the administration ultimately decides.

According to Johnson, Vice President of Student Life Jon Dooley was communicating with both executive boards before the announcement was made that classes would transition online until April 6 due to the coronavirus. This was to help SGA respond to questions from students about the precautions being taken.

Johnson said he is helping connect former senior class president Noor Irshaidat to Elon’s administration so she can help make commencement plans that seniors will enjoy. Johnson said he hopes an event like this will help give him the closure he needs to officially finish his time at Elon.

“It sucks. There's no other way to put it in my mind,” Johnson said. “No one wanted this. No one's happy about it.”