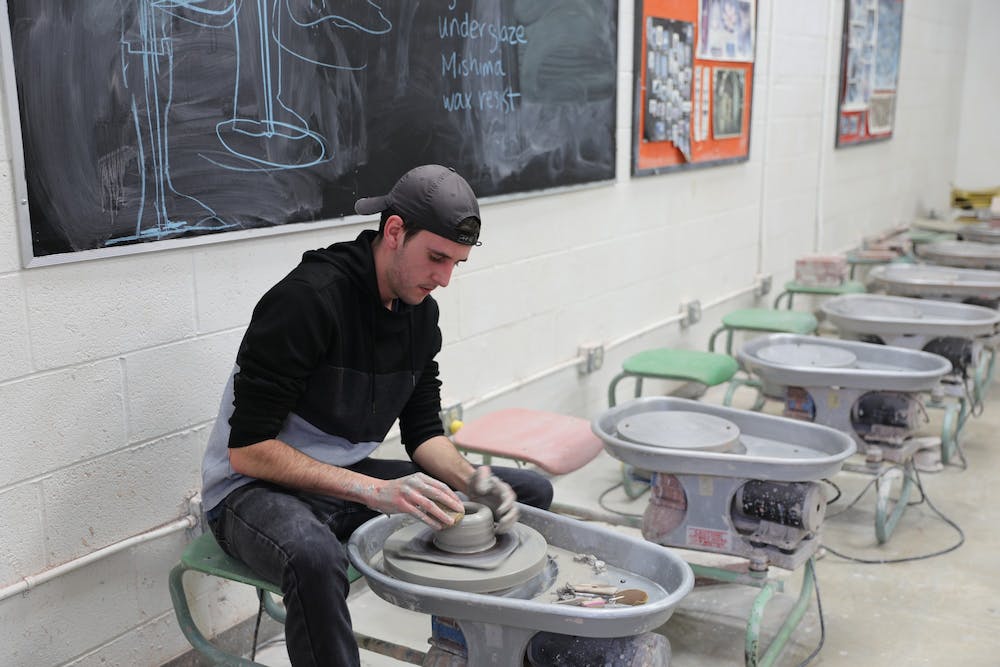 The motorized spinning of the pottery wheel matches the rhythmic hand motion of junior Thomas Cadman as he molds a chunk of clay into his latest piece of art.

According to Cadman, his whole body engages with the process as he works on the piece.

Cadman said the creative method he goes through is like “a type of meditation when you’re just on the wheel, really focused.”

Cadman said he discovered his passion for art during his sophomore year of high school. He signed up for a ceramics class to fulfill a requirement but ended up falling in love with pottery.

After finishing the class, Cadman continued to make pieces throughout high school, and enrolled at Elon University with the hope of following his passion. Now, pursuing a minor in studio art, Cadman has the opportunity to work on his ceramic skills.

“I like to make really big, tall pieces,” Cadman said. “I just kind of try to make my stuff functional ... but also very fluid and as big as I can make it.”

One day in 2018, Cadman said he opened his email inbox and found a message from alumna Lindsey Reeth ’19. Reeth said she was looking for ceramic students interested in getting involved with the Elon Student-Made Store.

As a potter, Cadman is one of the student artists involved in Elon’s Student-Made Store.

“The Student-Made Store is this project where it takes students who either make art or some sort of product — whether it be jewelry, wood carving, just any various product — and it allows them to share that and sell that to the local Elon community,” Cadman said.

The student store holds events throughout the year, which include its annual holiday market.

As a result of the considerable amount of time he has spent in the studio, Cadman found himself with too many pieces. So, he responded to Reeth’s email, hoping to sell some of his supply.

“We had been talking about how badly we wanted to find a student potter for so long, and here he was. We scheduled to meet him in the pottery studio, where he showed us pieces he had finished and pieces he was still working on,” Reeth said. “To say we were amazed would be an understatement. He made the most beautiful, vibrant, funky-shaped vases we had ever seen. And he was just a sophomore at Elon.”

Reeth started the store with Ryan McElhinney ’19 in 2016 during their sophomore year. Reeth said she felt somewhat ostracized on campus and was searching for an inclusive outlet. She said she found what she was looking for with her concept for the student-run art store.

“I felt that Elon was lacking a space like that, and I wanted to give people the chance to express themselves beyond the confines that can seem sometimes daunting on Elon’s campus,” Reeth said. “The store allowed me to get to know all different types of people and not only learn about their deepest passions but encourage them to continue what they love by giving them the added support of the Elon community and beyond through the store.”

"The store allowed me to get to know all different types of people and not only learn about their deepest passions but encourage them to continue what they love by giving them the added support of the Elon community and beyond through the store."

When looking for artists to get involved with the store, Reeth and McElhinney recruited a group of their friends. Once they had a few artists on board, the store continued to grow through word-of-mouth.

“It was somewhat of a domino effect because essentially every time we would meet someone who was making an awesome product, they knew someone else who was doing the same,” Reeth said. “And so from there, it just naturally expanded.”

Though not an artist herself, Reeth said she focused on the entrepreneurial part of the store by learning how to best market and grow each artist’s business. Since the store’s start in 2016, it has grown to feature the works of over 40 artists, including Cadman, and recently launched a website in the summer of 2019.

Cadman said the student store provided him many new opportunities as an artist. Since joining the store, Cadman has sold approximately 70 pieces, making close to $700.

The student store recently expanded into an online shop during the summer of 2019.

“The store allowed me to put a bunch of my products online, which was also something I never thought I’d be able to do,” Cadman said.

The student store holds events throughout the year, including its annual holiday market. Reeth hopes to expand in the future by selling to a wider range of people within the local area.