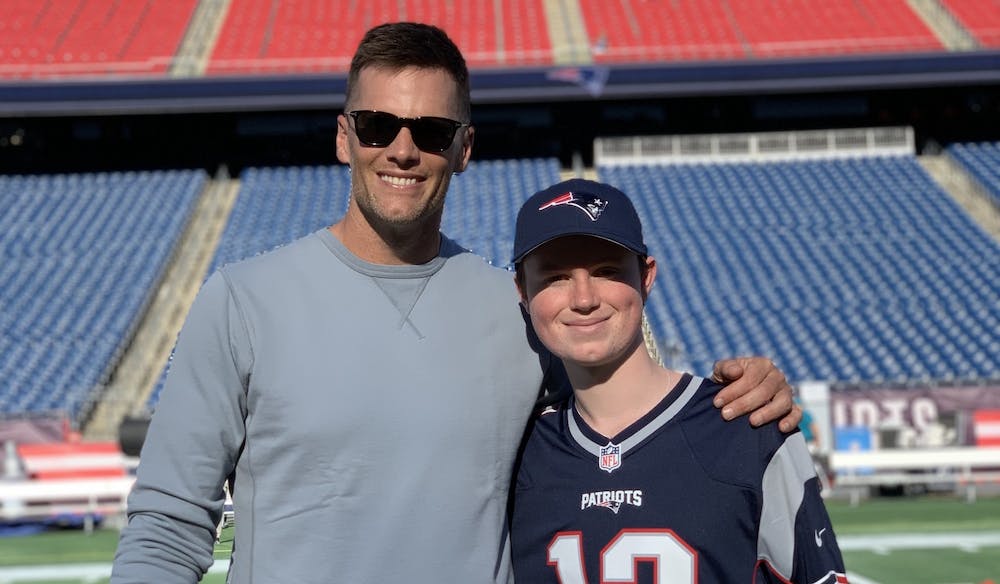 Freshman John Varney poses with the Tom Brady, the starting quarterback for the New England Patriots. Photo courtesy of the Varney family.

The words remembering the life of freshman John Varney filled the otherwise radio-silent room even more than the people inside of it.

“He was always ready to have fun. Always having a good time,” said freshman Joseph O’Keefe, who lived on the same floor as Varney in Smith residence hall.

Varney, 19, died Friday after a two-and-a- half-year battle with osteosarcoma, a rare type of bone cancer. He was a native of Washington, D.C. and a Boston sports fan. O’Keefe also said Varney was a passionate friend.

“He FaceTimed me and told me he wasn’t coming back,” O’Keefe said. “He still had a smile on his face. He still said that we should play some PS4 sometime.”

Friends, classmates and others who knew Varney gathered in the sacred space in Numen Lumen Pavilion to share stories about him and traits of his they admired. Above all else, one common theme emerged: his ability to overcome the worst affliction any person could imagine.

“Varney was the kind of kid that always had a smile on his face,” one noted. “There was not much that meant more to him than the people in this room right now.”

Varney was first diagnosed with osteosarcoma in 2017 after a whitewater rafting trip. He felt pain in his left knee afterwards, which he originally thought was just a sprain but turned out to be a growing tumor. After two years of treatment, his doctor said he was

well enough to come to Elon.
“I said, ‘Well, yeah, why wouldn’t I,” Varney

told Elon News Network in September. “It never even occurred to me that it might not be an option.”

Varney quickly became accustomed to college life. As his dorm-mates revealed in the gathering of friends Sunday night, the bond Varney had with his fellow “Smith boys” manifested itself into nightly poker games and golf matches down the hall.

“He came out of his room with his putter and his Patriot golf balls, and on his first shot, he sunk it,” O’Keefe said. “We all tried 100 times, but none of us could do it. But he sunk it on his first try.”

Despite his illness, O’Keefe said Varney never let it affect his desire to live a normal life at college. For O’Keefe, Varney’s death is something he never could have imagined when they met just six months earlier.