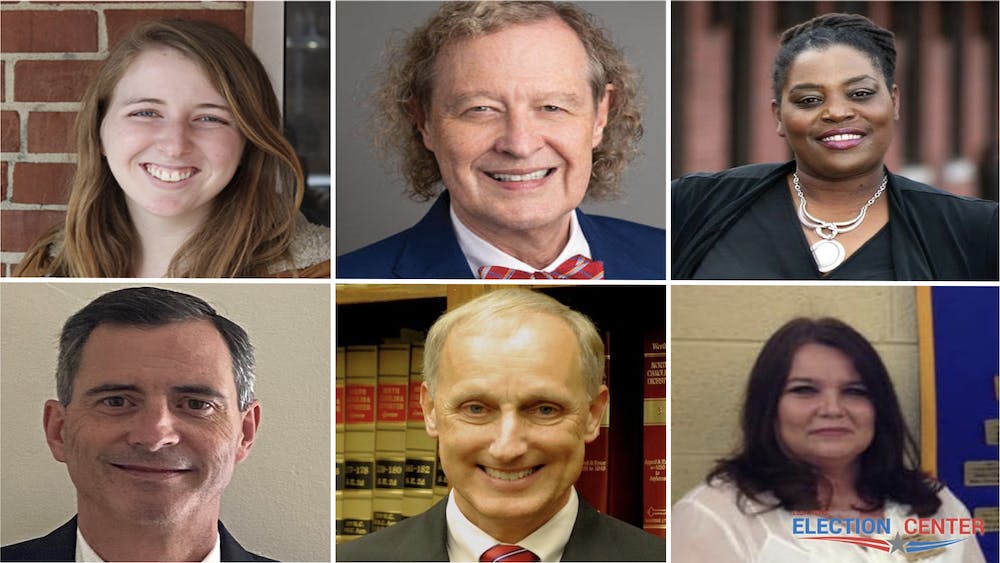 Six candidates will be on the November 3 ballots for Alamance County Commissioner after the March 3 primary election. Out of the six candidates, only three seats are open for election.

Democratic candidate Kristen Powers received 27.08%, followed by Bob Byrd with 25.72% and Dreama Caldwell with 18.15% of the vote in the primary.

Republican Bill Lashley finished with 21.12% of the vote, closely trailed by John Paisley Jr. with 19.46% and Pamela Thompson with 16.8%.

Each commissioner candidate has different ideas on how to better the county as a whole, but their main concerns revolve around education and the economy.

For Kristen Powers (D), funding school buildings is an essential part of improving education in Alamance.

“We did a survey of over 300 individuals and school buildings came up as one of the top five issues,” Powers said. “An additional investment of about $7 million a year could dramatically improve the situations of our schools.”

Bill Lashley (R) has a view on how to best address education in the county that revolves around discipline.

“They took discipline out of the schools,” Lashley said. “If you continually in the school system keep accepting bad behavior, you’re going to continually get more of it.”

“The most important thing, in my opinion, is to make sure public schools are as strong as they can be,” Byrd said. “It’s the foundation of a successful, prosperous community.”

Pamela Thompson (R) said her school board experience and her work with trauma victims has shown her that for education, mental health is an important issue.

“One of the things I pushed for in 2017 was for our school system to get mental health services on-site,” Thompson said. “A kid cannot have a trauma going on at home and walk into school the next day and nail it on that math test.”

Dreama Caldwell (D) wants to ensure that everyone can have access to a good education.

John Paisley Jr. (R) suggests improving safety and security for schools is a priority. Paisley is an  Elon University alumnus.

Thompson argues that although she disagrees with raising taxes without proper reasoning, they are important in providing resources and services to the community.

“When it comes to taxes, we did have a tax rate and it was raised,” “Nobody wants to pay more taxes then what they think they should — and I agree with that — but in the same sense I hope everybody will educate themselves on what your taxes buy you because they buy you a whole lot.”

Caldwell wants to bring more business into Alamance County as a way to boost the economy.

“There are businesses that can’t afford the advertising and things like that,” Caldwell said. She wants the county to be a place where people can come and grow business.

For Lashley, budgeting and taxes are some of the main focuses in his campaign.

“We need to focus on keeping our comparative advantage to other high tax countries around us,” Lashley said. “I’m very hawkish when it comes to our taxes.”

Powers placed emphasis on budgeting in the county as her way to improve the economy.

“It’s important to talk about smart budgeting and how a budget is a reflection of your moral values,” Powers said. “I also think it’s important to fund small businesses already existing in Alamance County.”

“I’m the only candidate to have voted for a tax decrease while maintaining benefits and resources,” Paisley said. “We always need to look at what the current budget is, what the expenses are, where can you save, where can you cut.”

Finally, Byrd said that if a tax increase is needed to support the county, he would not oppose it.

“We need to take care of our needs and we need to invest,” Byrd said. “If a tax increase is required to meet our needs and to make the investments that we need for our future — everybody’s future — then I’m not opposed to it.”