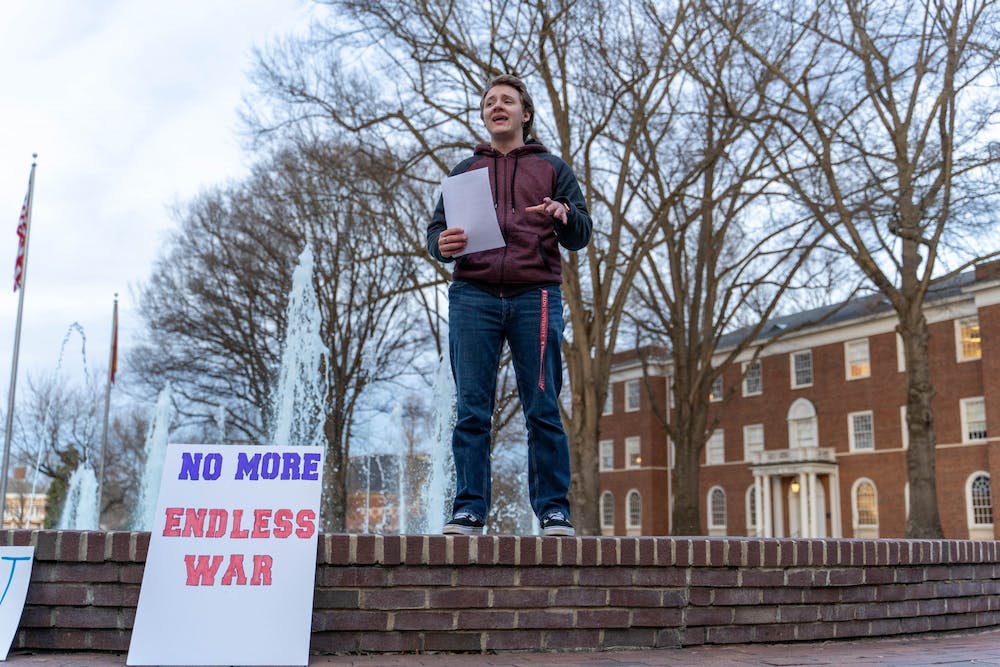 Photo by Clare Grant | Elon News Network
Jay Tiemann talks at the No War With Iran Protest on Thursday Jan. 9.

It’s easy to be overwhelmed by all the evil in the world and feel helpless to stop it. As young college students, we are relatively powerless beyond campus. As a student on the generally predictable campus of Elon University, I take pride in still being connected to the “real” world through news and social media. At times, I feel too connected. We can’t divest funds to pressure companies if we aren’t invested in anything yet. It’s hard to fundraise for causes when we’re all trying to save money for ourselves, however, we can still combine our strengths to create something meaningful.

We can use social media to raise awareness, gather on campus to protest and write op-eds. No individual creates a movement alone, but movements can’t occur without a high level of student involvement.

I’m a believer in the “ladder of engagement,” the idea that participating in one action makes one more likely to participate in future actions. Most students I talk to are frustrated about current events but don’t feel like they can do anything to help.

"no individual creates a movement alone, but movements can't occur without a high level of student involvement."

Organizing protests does have an impact, even if it’s not immediately visible. When I hosted the No War With Iran protest at Elon, I didn’t create it out of thin air. MoveOn, a national nonprofit, was holding a day of action for this issue on the same day, and the closest planned protest was in Raleigh. All I did was click “create an event in your area” and send it to everyone I could think of. Because I used an existing organization to host an event, it reached people in the Elon community I wasn’t connected to before. Student networks are great, but using outside channels can carry a call to action even further.

Protests can change the people participating in them for the better, and I don’t want to undersell the importance of that. During the Iran War protest, our small-but-loud group marched from Alamance Fountain to Young Commons, and I no longer felt alone. I no longer felt powerless. My pent-up frustrations from the 24-hour news cycle crystallized into determination and hope.

College campuses are a special place because they are centers of activity; students and faculty have wildly diverse backgrounds and experiences. It’s important to bring together different groups of people in order to have multiple perspectives represented and heard.

Sometimes I feel as though the government is incapable of doing the right thing. However, I refuse to lose hope.

As college students, we are navigating the world we will inherit. Why not fight together to make the world better before we’re supposed to take it on alone?

Real change takes passion, commitment and patience. Attending a protest can be a great way to get introduced to civil engagement, but sustained collective action is crucial in seeing your goals through to completion. If you find an issue you really want to fight for, you’re almost certainly not alone. Look for groups in your area or look into starting a local chapter of a national organization if nothing exists yet.

In today’s day and age, caring about what’s right instead of standing idly by in anger can be a radical act. It builds a resolve to keep engaging, to continue talking about it with your peers, to keep calling your representatives. Elon prides itself on turning students into engaged citizens, and I see protesting as one of many ways to achieve that goal.