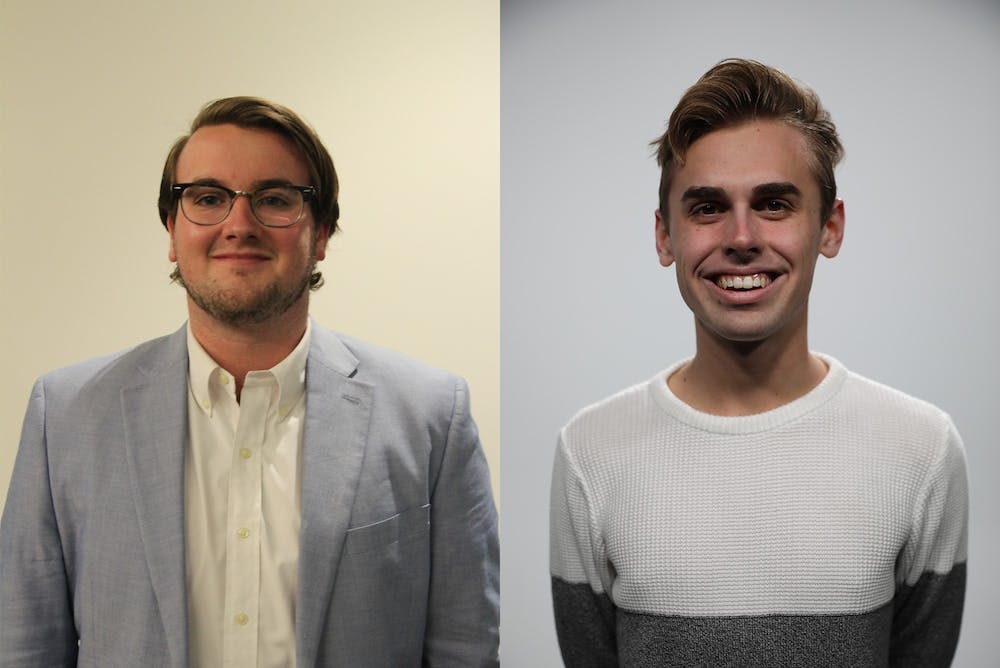 With student government elections fast approaching, candidates are gearing up for the campaign. The race for executive vice president will be between juniors Jonathan Stettler and Robert Cain.

“The president has a lot of ceremonial duties, but I think the vice president is the heart and soul of SGA, at least from an operational standpoint,” Sholar said. “It’s kind of like being backstage, but you have your spotlight every Thursday night.”

In addition to being the speaker of the senate, the executive vice president also has the power to call special meetings of the senate, appoint senate members to committees, draft the senate rules and serve as the judicial committee chair.

Stettler said he has “known for a little while” that he was interested in applying for the position of executive vice president for SGA. Being the speaker of the senate and supporting senators are two of the duties he is looking forward to the most.

“I feel like the executive vice president position offers the best opportunity to create the biggest and best impact on the community that I live in,” Stettler said. The English literature and policy studies double major became involved with SGA as a freshman, first as a College of Arts & Sciences senator and now as the chairman of the Academic Relations Council.

Sophomore Victoria Favorito, School of Communications senator, is a part of the academic relations council with Stettler. Favorito said in the two semesters she has worked with Stettler, she has seen his commitment and dedication to the senate in his leadership, in and outside of meetings.

“He has a passion for the senate which makes him a diligent worker,” Favorito said. “When Jonathan wants to see a change in the school, he does everything in his power to see that change.”

Stettler said he will campaign on three main ideas. His platform includes mental health and wellness on campus, empowering the senate and constituent outreach.

Throughout his time at Elon University, Stettler said he worked on mental health initiatives and hopes to continue those efforts as vice president.

Another initiative Stettler will focus on is empowering the senate. After being a senator himself and serving as the chair of the academic relations council, Stettler said he would like to help the senate “feel like they have the ability to take on their own initiatives and do their own things.”

The third biggest point of Stettler’s campaign is to increase constituent outreach.

“The most important aspect for the entire executive council is making sure that we build really solid two-way relationships with senior staff and administration on campus, the senate and the student body,” Stettler said. “Being able, as the executive board, to work on behalf of the senate and go and talk to administrators and build these relationships is going to be in the end what helps get a lot of our initiatives done.”

Most people would see being an “outsider” in an election as an obstacle to overcome, but Robert Cain sees it as an advantage.

“I have a really good perspective on how I can improve SGA, especially as an outsider, somebody who’s never served,” Cain said. “I have the ability to come in with new ideas that, maybe people who have served on SGA before, haven’t, just because they [are] in a bubble.”

The political science and policy studies double major said he has thought of running for SGA “almost every year,” and this year he decided to go for it.

“I’ve grown a lot in the last year and I’ve realized that I have a lot to say,” Cain said.

In addition to running for student body vice president, Cain serves as the president of Pi Kappa Phi, a fraternity on campus whose mission is to “create an uncommon and lifelong brotherhood that develops leaders and encourages service to others for the betterment of our communities,” according to PhoenixConnect. Cain said his leadership within this organization is something that he thinks will serve him, if elected vice president.

One of Cain’s peers and former president of Pi Kappa Phi, senior Riley Johnson, said Cain is an extremely diligent worker and “a man of the people.”

“From the moment I met Robert … he immediately wanted to get involved because he knew he could help better the organization,” Johnson said.

As president this year and secretary last year, Cain has been most involved with philanthropy through Pi Kappa Phi, and he said his proudest accomplishments in his leadership roles have revolved around philanthropy.

Cain will campaign on “transparency and openness to the greater Elon community,” something he said he does not always see with SGA.

“I sometimes worry that because of the SGA bubble, only the same people’s ideas are heard over and over again,” Cain said. “I hope that as executive vice president, I can really open it up and try to have forums where students are welcome to come and talk to us.”

For the average student, Cain said, SGA and SGA accomplishments may not be understood, something Cain hopes to change.

“Making sure that we are always upfront and honest with the Elon community, but also highlighting SGA’s accomplishments that are sometimes unseen or overlooked by the average Elon student,” Cain said.

In addition to transparency, Cain hopes to target football tailgating and increase turnout at tailgates and football games. He said he saw great improvement this year and would like to continue to push for and expand on this progress.

“Over the last two years, I know I’ve personally seen great progress in getting students to attend tailgates through SGA funding,” Cain said. “I think that this has had a great impact on school spirit and brought the student body together in a way that is rarely seen at Elon.”

Cain said he would also like to push for more consistent social programming for students, expanding on the “late night” and weekend programming done this year.

“There’s all these people that continuously run, year after year,” Cain said. “And I think that might cause them to create an environment where all the ideas are kind of the same, or just rehashes of the same idea. So I’m excited for the possibility that I might be able to kind of break the mold a little.”