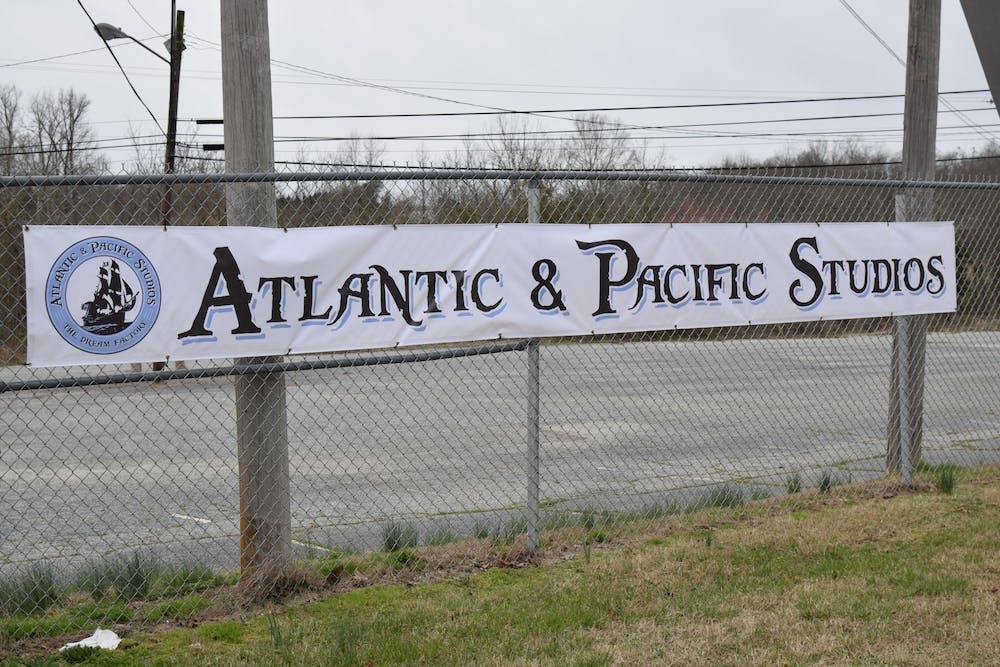 Photo by Kyra O'Connor | Elon News Network
A banner outside of the new Atlantic & Pacific Studios in Burlington.

Correction: The dates for auditions are Feb. 22 and 23. It was originally misprinted, Elon News Network regrets this error.

For 78 years, Copland Fabrics and Industries provided Americans not only with curtains, bedspreads and linings but also with something meaningful — their livelihoods.

At the end of 2018, Copland Industries and Copland Fabrics ceased operation, putting an end to the family-owned business and letting every employee go. James Copland, who served as resident and CEO at the time, marked the fourth and final generation to operate Copland Industries.

While Copland Industries did not file bankruptcy and was still paid its employees through the end of 2018, the factory itself was left vacant after its closing.

One year later however, the Copland Industries lot is now home to Atlantic Pacific Studio.

The Alamance County native had spent time on some of the biggest movie sets in Hollywood. From “Fast and Furious” to “Pirates of the Caribbean: Stranger Tides” and “Lincoln,” Dean has worked as a makeup artist, producer, writer and director alongside his brother, Starr, for nearly 30 years. The Jones brothers have worked on over 160 movies and 200 television episodes during their time in Hollywood.

Four years ago, the brothers moved back to North Carolina in hopes of producing and directing.

“I came back from LA a couple years ago with the intent of putting a number of feature films and television shows together,” Dean Jones said. “But I wanted to produce them from here, because I love working from home.”

Now, they are the cofounders of Atlantic Pacific Studio, something they refer to as “the dream factory.”

“I thought what I’d do is plant the seed to start the production company to teach people and harvest the talent here in Burlington and Alamance county, turn them into filmmakers,” Dean said.

Burlington, where the studio is located, is home to 53,748 people, 4.3% of whom are unemployed as of 2018. Following the close of Copland Industries, many more found themselves without employment.

As one of the major weavers, suppliers and commision finishers of woven fabric in the United States, Copland produced a variety of products and supplied brands such as J.C. Penney, Walmart and Sears. The company was famous for manufacturing 100% of their cloth in the U.S.

Copland Industries employed nearly 1,000 people in the 1980s, but with advances in automation and an increasingly difficult commitment to remaining “100% American made,” the company was forced to downsize, leading to its eventual close.

By using the mill and factory for the studio, Dean and Starr’s dream is already providing former employees with new jobs moving old equipment out of the building and setting up the production studio. This, Dean said, is just the beginning in how he plans to “harvest local talent.”

“LA productions come to town, and they make a movie and then they leave. The money that comes from those shows doesn’t stay here, it goes back to LA, to their bank accounts,” Dean said. “But what we’re trying to do is grow our own shows, which we do by self-financing, so when the show makes money, it comes back here.”

The studio will encompass all art forms including music, visual arts, theatre, dance and film-making. According to Dean, it will function as both a motion picture production studio and an entertainment complex.

“The rebate, whose funding is now labeled recurring in the state budget, coupled with the recent elimination of the program’s sunset date, demonstrates North Carolina’s long-term commitment to the film and entertainment industry,” its website states.

Enoch, head of transportation at Atlantic Pacific Studio, has lived in Alamance County his entire life and has witnessed just how many people lose their jobs.

“It was a mill-based town, and it took a lot of jobs away from this area when [Copland] closed down,” Enoch said.

Enoch graduated high school in January and went straight to Atlantic Pacific. One of the great things about the studio, he said, is that it is already providing jobs to members of the community.

“[The studio] will bring a whole new set of skills to this county,” Enoch said. “I know people who used to actually work in that mill, and when I told them what’s happening to it, they love the thought of it coming back as something else that will be more joyful to more people.”

One of the goals of Atlantic Pacific is to employ local talent, including Elon students, Dean said. The pair had their first informational meeting at Elon University on Feb. 6, where the brothers discussed possible opportunities for Elon students to get involved. Senior cinema and television arts major Lumi Rostick said she was grateful for the opportunity to meet the brothers, but she wants to know more.

“The fact that a production company is placing its roots in Burlington is an incredible opportunity for future cinema and acting students at Elon,” Rostick said. “I would have appreciated their pitch more if they explained it as an opportunity to learn and work with professionals rather than a place for us to be credited as high end rolls, when that isn’t the case.”

Vic Costello, chair of the department of cinema and television arts, agreed with Rostick, saying a film studio “minutes away” from Elon has the potential to provide students with many opportunities.

“I was pleased with the student turnout and interest expressed during the recent visit by Dean and Starr Jones,” Costello said. “I’m excited about the Jones brothers’ plans to establish a professional film studio and entertainment complex in Alamance County and the opportunities this may create for our Cinema and Television Arts majors to work and gain experience in all stages of film production from script to screen.”

Atlantic Pacific Studio will be holding open auditions on Feb. 22 and 23 for their current project, “Broken” based on the autobiography “From Hear to Forever.’’ The autobiography, written by Danny Jefferson, an Alamance County local, describes his overcoming of a hearing impairment, among other conditions, to own several funeral homes and even start a career in comedy.