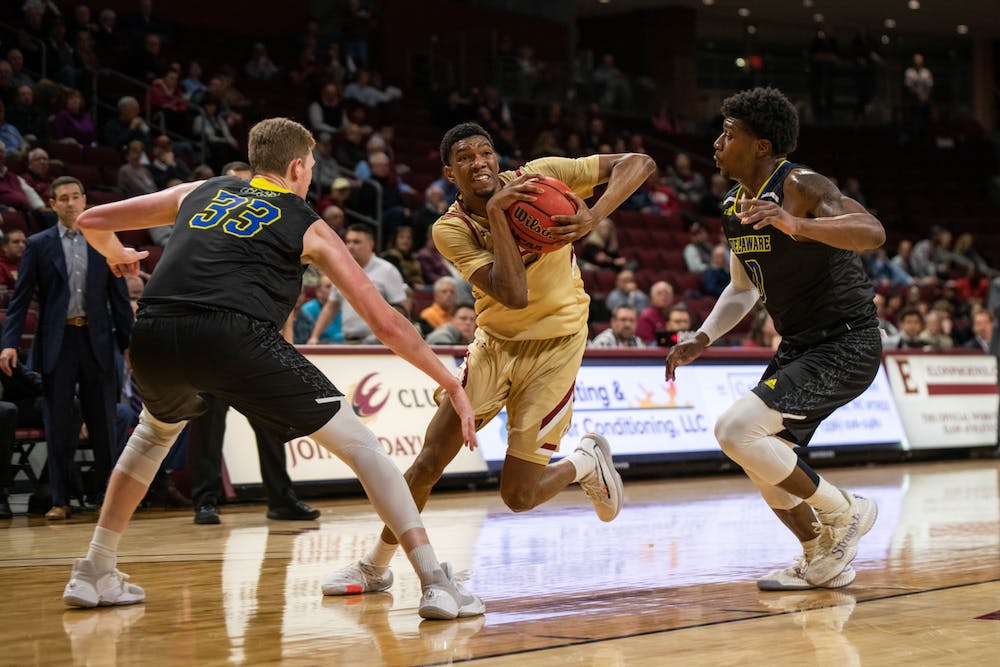 Photo by Thomas Denome | Elon News Network
Elon guard/forward Marcus Sheffield II drives between two Delware defenders toward the basket in a game on February 13 in Schar Center. Sheffield finished with 24 points in the Phoenix's 81-75 loss.

Elon University men's basketball (9-18, 5-9 CAA) fell to the No. 2 ranked team in the conference, the University of Delaware Blue Hens (18-7, 9-4 CAA) 81-75 on Thursday night. The Phoenix looked to continue a three-game win streak, but fell short down the stretch.

Going into Thursday’s game, graduate guard Marcus Sheffield only needed three points to reach 1,000 for his career. It took Sheffield only two minutes and 30 seconds to shoot from the three-point line, reaching the milestone. He wasn’t finished there. Sheffield went on to score a game-high 24 points.

“I’m proud of him,” head coach Mike Schrage said. “I’m just proud of him being here with us this year. I was shocked that he hadn’t had 1,000 points yet.”

After an early lead, the Phoenix quickly lost momentum as Delaware went ahead 13-12 about six minutes into the first half. Elon didn’t lead again in the first half, trailing by as many as 11 points.

A major challenge for Elon was Delaware redshirt-junior guard Nate Darling. In the first half, Darling put up 15 points, with Elon freshman guard Hunter McIntosh matched up with him for most of the night. McIntosh was able to deliver for the Phoenix on the other side of the court, finishing with 14 points.The Phoenix went into halftime trailing 43-38.

“Over the course of the game, especially that first 10 minutes they definitely came out strong,” McIntosh said., “But I think our team showed a lot of resilience, you know, a lot of fight today.”

The Phoenix came into the second half looking to close the gap. Freshman forward Hunter Woods put the first points of the half on the board, followed by a pair of three-pointers from Sheffield that brought the score to 48-46.

With 7:06 to play, Sheffield’s basket to put the Phoenix up 65-64 was the first lead since early in the first half. This lead gave McIntosh the momentum to hit a go-ahead three-pointer, making it a 73-70 with 2:01 left in to play.

However, two consecutive turnovers by the Phoenix with 17 seconds remaining would give the Blue Hens the final advantage it needed. Ensuing points by Delaware brought the score to 81-75 ending the Phoenix win streak.

“I told the guys we’re not going to let this game break our momentum,” said Schrage. “We’re not. The reason why we won these last however many games is because we hadn’t let anything break our momentum or spirit all year. So we want the results on the other side of the ledger.”