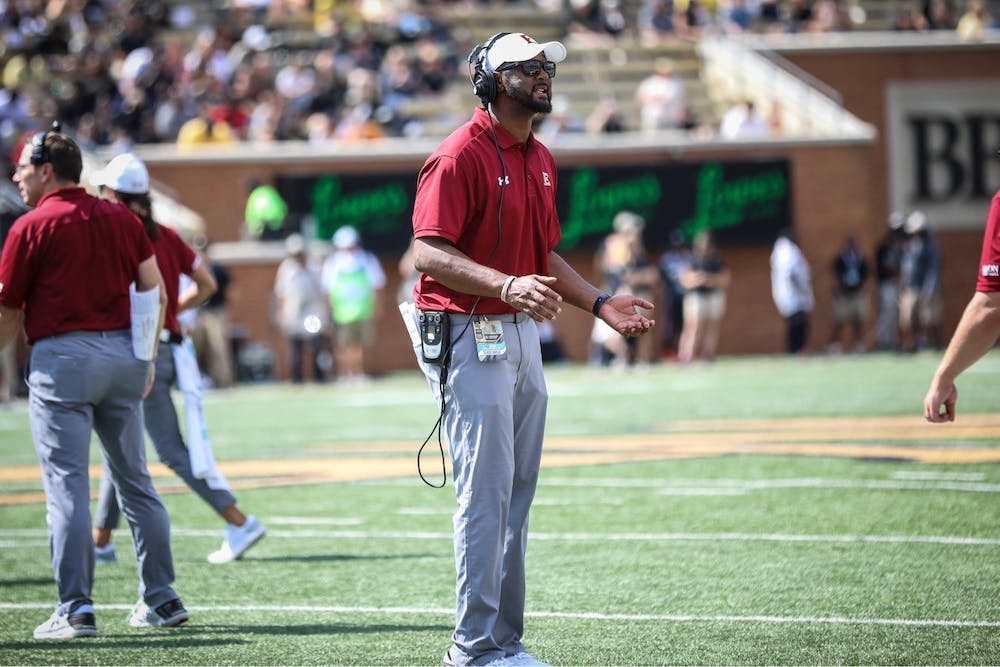 Elon University football assistant and cornerbacks coach Chris Bland talks with his team during the Phoenix’s Week 4 game at Wake Forest University. Bland graduated from Elon in 2008 and returned to the team under head coach Tony Trisciani. Photo courtesy of Elon Athletics

Bland played for the Phoenix from 2004-2008 and was a three-year starter. On the field, he was a star for the Phoenix. Even though one of Bland’s flagship sayings was “trust the process,” he didn’t quite know what his process would be after college. That is, until he found a bit of luck at a local high school.

“I had a best friend that was coaching at the local high school,” Bland said. “He kind of helped me out a little bit, got me into West Brunswick High School as a TA, and just wanted to help out with the football team.”

Back home and on familiar turf, Bland said he continued to learn from his mentors to became a leader for the young men passing through the high school ranks.

From West Brunswick High School, Bland moved to Eastern Carolina University, where he said he grew exponentially as a coach. Bland said he utilized his position and friendly demeanor to teach his kids about football and how to succeed in life.

"Though I got into coaching and you're trying to win games, you can use football as a life lesson. it was something that, actually, I wanted to instill in young men and using football as a way to do that; to use that platform to help out young men to be successful in life after football."

“Though I got into coaching and you’re trying to win games, you can use football as a life lesson,” Bland said. “It was something that, actually, I wanted to instill in young men and using football as a way to do that; to use that platform to help out young men to be successful in life after football.”

After his time at ECU, Bland spent some time at Brevard College, then landed at Football Championship Subdivision up-and-comer Kennesaw State University to coach the Owls’ defensive backs in 2014. Bland experienced success at a high level at Kennesaw State, and became quite the name in coaching circles.

Life for Bland changed forever when his former coach called. Tony Trisciani was on the coaching staff at Elon in 2006 when Bland played and had recently been promoted to the head coaching position at Elon. Trisciani needed a defensive backs coach and called his former player to fill the position. Coupled with the intrigue of coaching at his alma mater and moving closer to home, Bland accepted the offer.

“My grandma got sick. She got very, very sick and I wanted to get back closer just so I can see her more,” Bland said. “So when coach Trisciani got the job here, and he called me up about coming back, it was a no-brainer at that time.”

Bland is part of a culture change for the Phoenix, as Trisciani took over the reigns prior to the 2019 season. The Phoenix looked to continue developing quality football players both on and off the field. Back at Rhodes Stadium, Bland said he is happy to play in the highly competitive Colonial Athletic Association.

“When you think about football and you want to get into the best conference, the CAA is the conference,” Bland says.

Elon has not been known for developing NFL prospects until recently, when the culture began to evolve for the Elon football program. Offensive tackle Olisaemeka Udoh was selected by the Minnesota Vikings in the 6th round of the 2019 NFL draft. Bland said he wants to see more players make the transition to the pros.

“We play great football here, and we have talented athletes here,” Bland said. “We have guys that are eager to get on the field and to develop their skills and try to win. So I think they do a really, really good job here of just, you know, developing young men into NFL prospects.”

Aside from excelling on the field, Elon has established itself as one of the nation’s most prestigious schools for the education of the student athlete. Bland is exactly the kind of mentor that drives Elon players need to succeed in the classroom.

“We’re an education institution. So you are a student first,” Bland said. “You’re a student-athlete, not an athlete-student. First and foremost is that you got to get it done in the classroom, you know, and I always tell my guys every day with every day that we leave the field, ‘Hey, make sure you take care of your business off this field.’”

Bland said he knows receiving an education lasts a lifetime, and instills that value in his players. “Academics is why you’re here,” Bland said. “Football is a privilege to play, you know. You’re here to get an education.”

Bland is a mentor on the field and in the academic sphere, but he is an even better mentor in the social growth of his guys. He is one of the many inspiring people who push Elon students to perform to their highest potential, while being the best person that they can be.

Bland truly embodies the Elon spirit, and sparks life in the people he mentors. “Sometimes you just have to, you know, do what you have to do to get by,” Bland said. But trust the process, believe in yourself, and I promise everything will work out for the better.”

Off the field, Bland keeps his cheerful demeanor, attending other sporting events, listening to all kinds of music and indulging in his love for comedy movies. “I love comedy,” Bland said. “I love anything comedy just because I love to laugh, you know, and I can tell people all the time when you can laugh, doesn’t matter what happens in your life. You’re laughing, you’re happy. You can’t laugh and be upset.”

Both on and off the field, Bland is devoted to promoting a healthy culture. His excellence at his craft and passion for teaching are clearly evident. He truly embodies the Phoenix spirit. With a new era and the help of Bland, the Phoenix football program looks to soar to new heights.