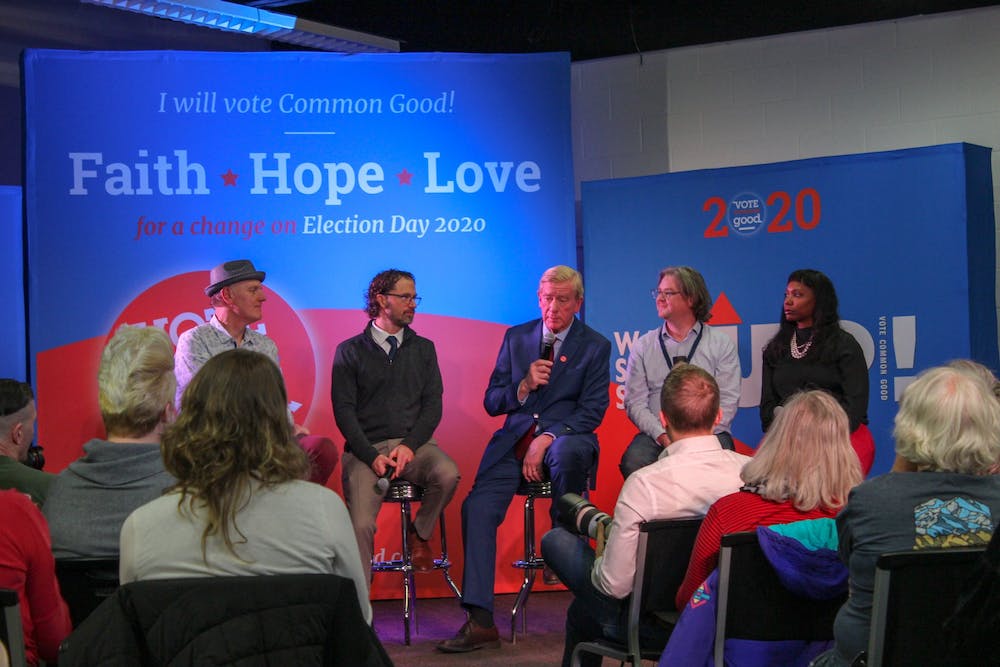 DES MOINES, Iowa– Former Governor of Massachusetts and Republican presidential candidate Bill Weld spoke at the Faith, Politics and Common Good Summit on Jan. 9 along with author Marianne Williamson, who announced the suspension of her campaign on Jan. 10.

Although the panel discussion centered around faith in politics, Weld said religion has not been a large part of his career.

“I’m not a person who has traditionally worn my religion on my sleeve,” Weld said, adding that as governor of Massachusetts he “had a lot of truck” with Cardinal Bernard Law, then a cardinal of the Roman-Catholic Church.

In an exclusive interview with Elon News Network, Weld said that after three years of Trump’s “funny policies,” the U.S. is in need of “a period of healing.” He added that the 2020 election cycle is a good time for “people who are calm and relaxed to be running for president.”

Weld explained some of his stances on social issues and said that Trump’s denial of climate change is “kind of contrary to every scientific measurement known to man” and that the president’s stance on immigration is “contrary to every economic indicator known to man” because of the role of undocumented immigrants in the U.S. economy.

He also emphasized his record with issues in which Trump lacks expertise, according to Weld.

“I know about nuclear non-proliferation, I know about climate change, I know about shortage of water, about religious sectarianism, about the shortages of food around the world, and Mr. Trump has no background on that, there’s no reason he should know anything about it and he doesn’t.”

Although Weld said the 1993 Massachusetts Education Reform Act is the “legislative achievement” he is “proudest” of in his time as governor, he said he would not move to implement similar reform nationwide as the president. Instead, Weld said this is an issue he would leave at the state and local level, moving to back state efforts to support workers displaced by automation and artificial intelligence.

“I don’t see anyone in Washington working on that, it really should be a federal issue,” Weld said. “We’re talking about the future of work in the United States.”

Weld said he is reaching out to college students by emphasizing the issues of climate change and annual deficits which he said will impact social security and other federal benefits.