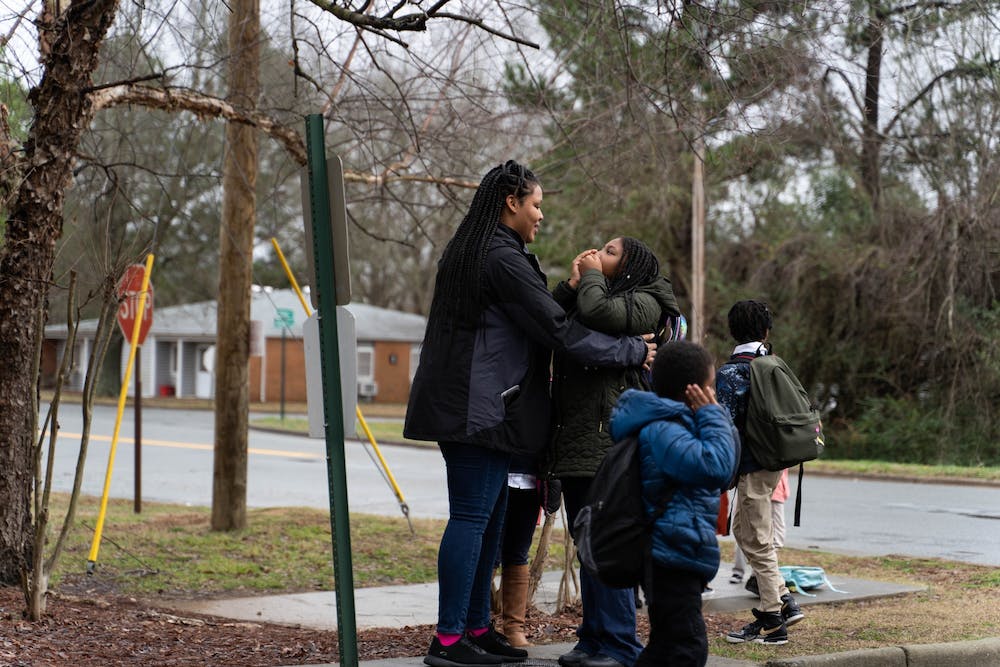 Photo by Clare Grant | Elon News Network
Left to right: Lashika Charles greets her daughter Skylee Ferebee everyday when she gets off the bus in Graham, North Carolina on Tuesday Jan. 14.

Lashika Charles sometimes drives her daughter to Elon University on Wednesday evenings. But sometimes her mother will, depending on if Charles has enough money for gas.

“Employment… yeah I’ve been having my ups and downs,” Charles said.

Charles recently lost her job, which has made transportation to and from Elon much more difficult.

Her daughter is a participant in the “It Takes a Village” Project at Elon. The program aims to give underprivileged students in the community access to quality education, a resource which Charles said is hard to come by.

Charles said her daughter’s education is her top priority, despite any financial hardship she faces.

Charles said she spent her youth in New York City as the oldest of nine siblings, yet she described herself as shy. She said she started to learn more about the world when someone took an interest in her education.

“A preacher had came up to me and said, ‘You know what, timidness ain’t going to do nothing for you but shun your dreams,’” Charles said. “He said, ‘You don’t know what that means?’ and I said no I didn’t. He said ‘Maybe if you go to one of my reading classes you can learn what timid and shun means.”

Charles said the preacher’s act of kindness in going out of his way to teach her to read gave her a new perspective. Now, she’s passing on the favor.

“I took that skill he gave to me, and I did it with my daughter” she said.

As a young adult, Charles said she was a victim of molestation, abuse and discrimination, all of which she said affected her chances of finishing college.

“It was a struggle up there. So much struggle,” Charles said.

She said she moved to Alamance County following a domestic dispute, which was when the challenge of finding an affordable, sustainable education for her daughter began.

“I packed up my one bag of clothes with $600 on my card… and I came straight down to North Carolina,” Charles said.

In order to provide for her daughter, Charles has worked many jobs as a single mother, including waitressing and hair-dressing. She said she is also currently enrolled in online classes, remaining dedicated to supporting her daughter Skylee.

Charles described Skylee as a bright and fun-loving 9-year-old. Skylee currently attends Haw River Elementary School, which is not far from their two-bedroom apartment in a public housing complex in Graham.

For Skylee, her academic career is just beginning. Charles said she wants her daughter to get the best education she can.

“Education is our generation’s route right now, it’s our journey” Charles said. “Education is one of the main factors of being successful in this world today. I just think that gives edges to anyone. Any individual should have education.”

For now, Charles is making between $8,000-$10,000 per year. She said she is doing her best but that her current financial situation makes it difficult to support her daughter’s academic endeavors, which include buying school supplies and attending field trips.

Skylee’s elementary school qualifies for Title I program services, which provides federal funding to schools in which at least 55% of students are considered economically disadvantaged.

According to a 2017 national study on high school graduates’ pursuance of higher education, college enrollment immediately following high school graduation is 10% less for students who attended a high school classified as low income than for those graduating from higher-income schools.

Charles said she wants to eventually move out of Section 8 housing, potentially allowing her to enroll Skylee in a school that could better prepare her for college enrollment.

The one that got away

In a predominantly Hispanic neighborhood in Burlington resides the Alvarado family, who emigrated to the United States from Ecuador before welcoming twins.

One of those twins is Kevin Alvarado, who was accepted into the Odyssey Program at Elon University, despite an economically disadvantaged upbringing.

Patrick Murphy, director of Financial Aid at Elon, speculates that Odyssey applications “are probably in the several hundreds.”

Odyssey Scholars at Elon must be first generation college students who have lacked opportunities to be involved in enriching educational programs within their school systems. They are described as students who will “bring cultural or socioeconomic diversity” to the school.

Growing up, Alvarado, his mother and his sister shared one bedroom in their Burlington home. Attached to their home was a care center, where Kevin’s mother often prepared meals and provided a living space for people in the community.

Alvarado said he is grateful to have had his mother’s support, which helped him get to where he is today.

"A lot of low income students do dream of giving their parents the house they want... But I think one thing we all have in common is that we are appreciative of our parents, because if it wasn't for them I don't think we would be pushed so hard."

Alvarado also attended the Elon Academy, which is a program dedicated to helping local students with financial need pursue higher education. He said it allowed him to get his foot in the door of higher education and set him up for success when the college application process rolled around.

“Out of my 10 friends, I’d say four to five of them dropped out. Three of them are working,” Alvarado said. “Even though they graduated high school, they’re continuing working construction and stuff like that.”

According to the latest data on North Carolina high school dropout rates, the Alamance-Burlington school system is among the top 20 with the highest dropout rates.

When Alvarado arrived on Elon’s campus, he said it was luxurious. He said the fact that students owned particular items, such as cars and clothes, was off putting to him.

“I come from a school where people barely even have a house. They may rent a trailer or they may live in some kind of government subsidized housing,” Alvarado said. “Coming to Elon where like students are like, ‘Yeah, I own this or my parents bought me this for my birthday,’ it’s kind of crazy,” Alvarado said.

Alvarado is currently in his junior year. Next semester, he plans on studying abroad in Spain, an opportunity he said he never would have had if it wasn’t for the help of Elon.

Alvarado said he is humbled to have experienced such hardships growing up because it only makes his achievements more special.

“I do feel grateful,” Alvarado said. “All those late nights I stayed up studying and tried to get the best grade I could, it will pay off.”

Programs at Elon for students from disadvantaged economic backgrounds are the Odyssey Program, the ‘It Takes a Village’ Project, and the Elon Academy, all of which were started under Leo Lambert’s tenure as president.

According to Vice President of Institutional Advancement Nan Perkins, Leo Lambert was known for caring about students with disadvantaged economic backgrounds. In her contribution to an article on Lambert’s legacy, she recalled him saying, “Elon cannot be an island of prosperity in a sea of poverty.”

Progress on The Elon Commitment reveals that the university’s strategic 10-year-plan is 96.9 percent complete. One of the three subgoals within the goal to “double need-based financial aid,” which are listed as “In progress but will be completed,” is to increase need-based aid as a whole. This would lead to higher participation in the Odyssey program and more socioeconomic diversity at the university.

Need-based aid uses the Free Application for Federal Student Aid application (FAFSA) to award financial aid based on a student’s family’s financial situation. According to Murphy, just over half of the student body at Elon applies for need-based financial aid, which includes students who do not qualify for aid.

“We actually do have people that make over $1 million that apply for need-based aid” Murphy said. “I guess need is relative in everyone’s mind.”

Murphy said around 35 to 36 percent of the student body actually qualifies for need-based aid.

However, Murphy said that students who apply for need-based aid do not necessarily come from a low-income family, meaning they do not contribute to the socioeconomic diversity at Elon.

“There’s kind of a myth out there that financial need is dependent upon income,” Murphy said. “That’s not necessarily true. There’s a whole lot of factors that play into that. So, say you could have a family who is making well over $100,000 a year, but they might have six kids in college. That’s a very high need family.”

Murphy said in total, two-thirds of students receive some type of aid. As for socioeconomic diversity, Murphy said that’s what awarding financial aid is all about.

“It’s designed to level the playing field to enable somebody who normally would not be able to attend to be able to be here,” Murphy said. “I would say that’s the underlying purpose of financial aid at the root.”

According to a 2017 New York Times report based on millions of anonymous tax records, the median family income at Elon is $208,300, and nearly 80% of the student body comes from a family in the top 20% of households based on income.

Murphy said the priority of the university has been to focus on “keeping the tuition low, which also means that our financial aid is low.”

The Center for Access and Success said the university has taken tremendous strides toward socioeconomic diversity. The Odyssey Program has increased its pool of applicants, and there was recently a large increase in new scholarships, which drew half a million dollars from endowments.

For low-income students applying for need-based aid, Murphy said he suggests taking time to discuss the road ahead.

“Sit down as a family and just discuss what is realistic,” Murphy said. “We’re not going to be stepping it up if they fail the plan for their four. So realize that college is a four-year proposition.”