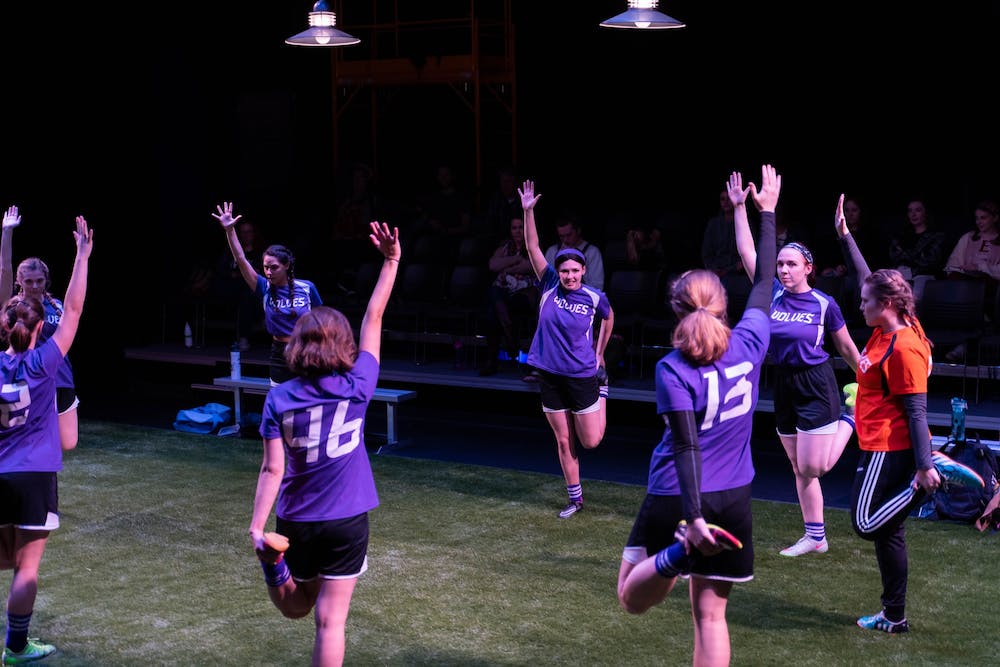 Photo by Clare Grant | Elon News Network
Members of Elon University's production of 'The Wolves' stretch to get ready for their game in the show in Roberts Studio Theater in Arts West on Tuesday Jan. 14.

Correction: "The Wolves" is not a musical as previously indicated in the headline. Elon News Network regrets this error.

The theater production process is intimidating in any capacity, but Elon University’s performing arts department is going after its goals in just a twelve-day period.

Director Kim Shively explained that the crew began production on Jan. 3 and will work from 9a.m.-6 p.m. everyday until completion.

“We will have worked for twelve days with admirable commitment from the students,” she said.

“The team warms-up and dribbles while dealing with the cut-throat, competitive world of high school sports,” Shively said. As the teens struggle with the transition from adolescence to adulthood, they sweat their way through this funny and poignant play.

“Very often, female stories are told or written by men, [but] ‘The Wolves’ is a play about women empowerment, by a female playwright, which is really unique,” Shively said.

To enhance the “girl power” concept, the play features an all-female cast in scenes situated before the team’s soccer games. The show depicts themes and a storyline of the experiences of these young women in modern.

“The show is exciting for a lot of reasons. It was written in 2016 by Sarah DeLappe, a young playwright, in her twenties. The show is just four years old and has had a very successful run off-Broadway and is being performed all over the country,” Shively said.

“It is rewarding to get to work with my creative partner and with the students, some who I have known for four years,” Shively said. “Being my fourth year at Elon, there’s something really satisfying about it. It’s a really unique and collaborative experience to have a modern female director and female dramatargue, with an all-female cast.”

Dedication and hardwork are not unfamiliar to Elon’s actors. The drive and passion they exhibit has aided a rapid production process, which will be ready for the stage shortly.

Junior, Haley Bronzino, who’s character goes only by her uniform number, 13, said, “during callbacks, there were basic soccer drills and exercises which we had to do with the ball in order to make it believable to the audience that we are passionate about soccer, even if we did not play in real life.”

Bronzino explained that the actors have been exposed to plant-based diets followed by professional athletes, which has aided in the understanding of what goes into the process of putting a show together.

“It’s so inspiring to be surrounded by smart, intelligent, creative women to tell the story,” Bronzino said.

“Number 13 is a character who is your wacky, out of context friend, the class clown who is always looking for a joke and brings a lot of energy to the scene,” Bronzino said.

“The want to always be funny causes Number 13 to be less aware of those around her. Her flaw lies in the fact that she does not take the big issues around the world seriously. They don’t seem real to her,” Bronzino said.

Bronzino said being a part of the show has shown her “how much of the outside world drifts into the lives of the girls.”

A modern play like “The Wolves” has taught the actors and hopes to show the audience how issues can influence the way individuals treat each other in their daily lives.

In acknowledging age differences from 16-year-old teenagers to 45-year-old adults, Bronzino said, “the number makes us feel like we are so different, yet, in reality we are experiencing the same thing.”

Senior Alexandra Stafford describes “The Wolves” as a coming-of-age story in a media-heavy time, where the characters have so much thrown at them which they must deal with as well.

“I play Number 8, who I call the ‘middle child’, who holds an ‘I see you, do you see me?’ outlook,” Stafford said. “She is young, naive and really wants to make connections. #8 is bubbly and wants to remain an adolescent for as long as she can.”

The girls in the show say they are confined to the bubble of their soccer team.

“There are so many expectations put on women to be a lot more mature,” Stafford said. “There is a lot of pressure placed on the youth to be the best, when they are just trying to figure out who they are.”

“The show is an honest look at young girls coming up in a media age. It’s the play to see,” Stafford said.

In the changing times, “The Wolves” is not a story seen very often in theater today. It is a play written by women for women.

“It is empowering and rewarding to be in a room with females sharing a story about women, it’s not a story you see everyday,” Stafford said.

"all the girls have flaws, yet all have moments of serious power and strength as well. The show is young girls coming to terms with their sexuality, familial, social, educational and world issues. the show is so beautifully done and an honor to be a part of."

“All the girls have flaws, yet all have moments of serious power and strength as well. The show is young girls coming to terms with their sexuality, familial, social, educational and world issues. The show is so beautifully done and an honor to be a part of,” Stafford said.

Confined to an air dome, the audience will watch as the girls mature, learning about each other and themselves in the 21st century.

“There is so much change for each character from the beginning to the end,” Stafford said.

“The Wolves” is unique and unlike many other productions. The only characters on stage are female.

“The male-identified characters may be acknowledged, but they are never seen on stage,” Stafford said.

“Because the characters do not have names and are identified by their numbers, they can be played by anyone, of any demographic,” Stafford said.

“The Wolves” is a contemporary story and a positive portrayal of women empowerment.

A milestone for women entertainment, “The Wolves” wrestles with massive issues rarely discussed in theater.

“It has been so much fun getting into the mentality of a teen athlete and portraying this very specific purview of the world,” Stafford said.