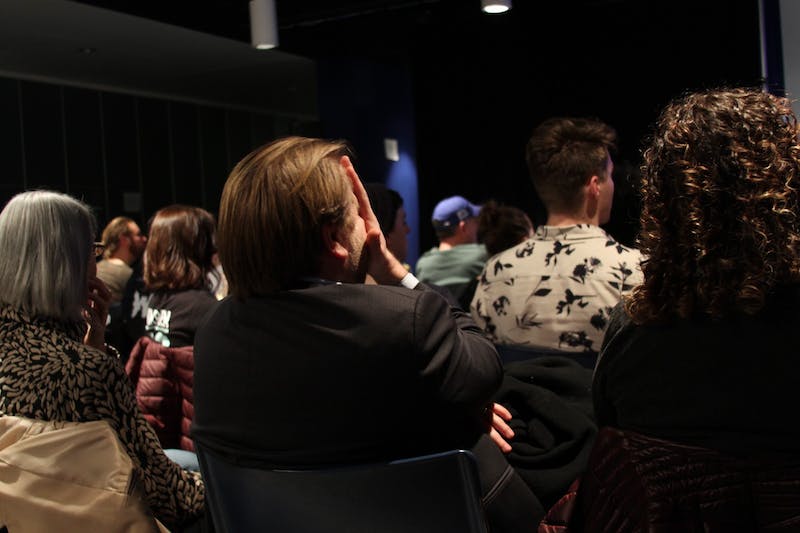 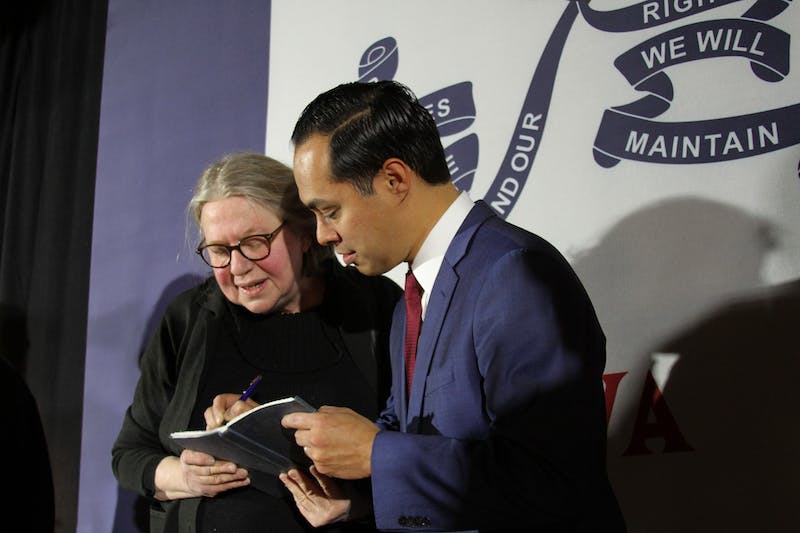 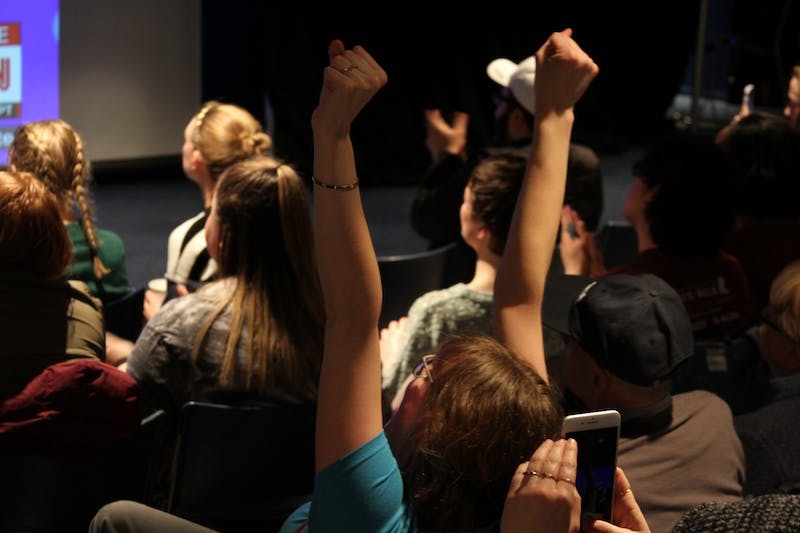 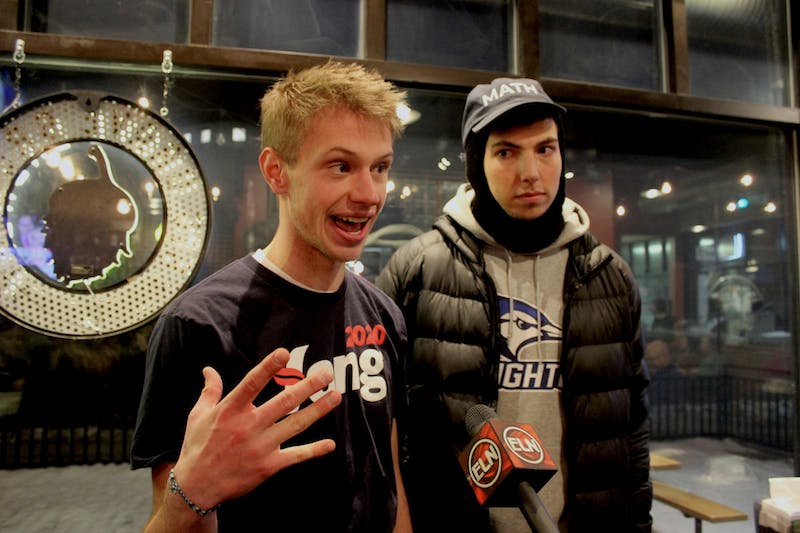 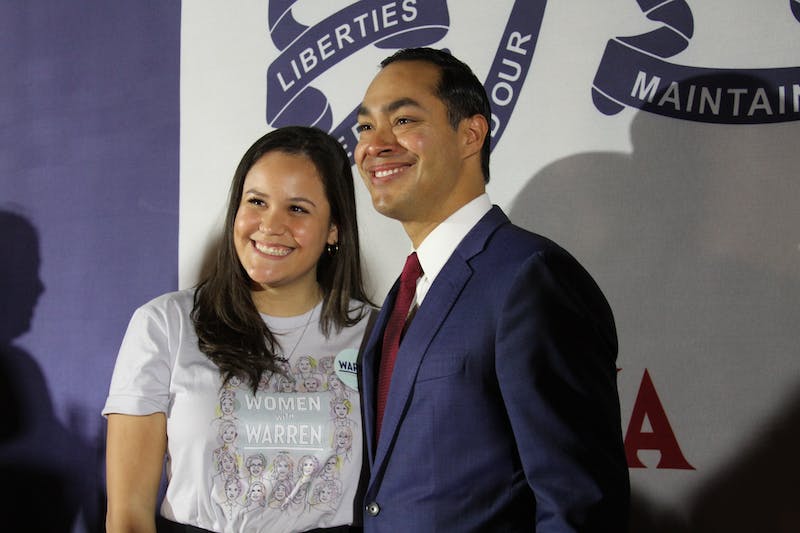 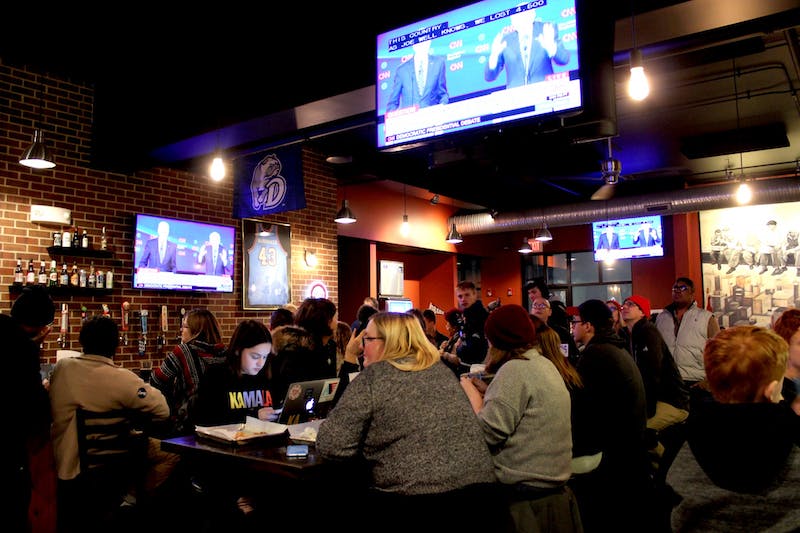 DES MOINES, Iowa — The final Democratic debate before the Iowa caucuses, hosted by CNN and the Des Moines Register, was held at Drake University on Jan. 14. Even though most Drake students were unable to attend the debate, candidates and student groups hosted multiple watch parties in and around the campus.

Both Sen. Elizabeth Warren (D-MA) and Sen. Amy Klobuchar (D-MN) hosted separate watch parties at Drake’s Olmsted Center. Students and supporters from around the country gathered to see their favorite candidates take the national stage. Other candidates hosted watch parties across the city.

Students gather to watch the debate

College and Young Democrats of Iowa and Drake University Democrats organized a watch party at Papa Keno’s Pizzeria for their fellow students. However, the majority of the crowd wasn’t students.

During the debate, there were close to 40 people in the pizzeria, located across the street from Drake, at one time. However, people were coming and going throughout the night.

Andrew Dunn is a student at Simpson College and is planning on caucusing for Elizabeth Warren. However, he chose to attend the student watch party over Warren’s.

Dunn said he was happy with Warren’s performance on the debate stage.

Dunn sat next to Drake University student Nicole Margheim during the event. Margheim said the debate was “better than some others,” but she said she wishes the moderators would have asked more questions about policy.

“I was frustrated with some early attempts from the moderators to try and pit the two candidates against each other,” Margheim said. “There were a couple of questions that seemed to be like, ‘Okay, now fight!’”

Katie O’Keefe and Hannah Albrecht, both Drake alumnae who still live in Des Moines, also attended the event. However, O’Keefe said it was a coincidence. They were unaware of the watch party but said she and her friends wanted to see the debate close to the university.

O’Keefe said she wished the candidates would have discussed voter suppression, gun control and the economy more during the debate.

The watch party was also filled with Andrew Yang supporters. These supporters gathered in front of Drake before the debate to protest Andrew Yang’s absence on the debate stage.

“I hope that the six candidates who did qualify are bold enough to stand up to the DNC and say that the way they are conducting the polling to qualify for these debates is pretty corrupt,” Galaski said.

Both Galaski and Aidan Swanson, another Creighton student and Yang supporter, said climate change is the most important issue to them.

“Our future is on the line,” Swanson said as Galaski nodded in agreement.

Both Swanson and Galaski said it is the duty of people of privilege to vote in this election.

“I think when Trump got elected there was a lot of apathy and there were a lot of people saying, ‘Oh, you’re lives not going to change it doesn’t matter,’” Galaski said. “But, the bottom line is for the people who are in cages right now, their lives did change.”

Warren supporters cheer on their candidate of choice

Julian Castro greeted about 130 supporters and volunteers of Elizabeth Warren, just an hour before the debate.  From education, climate change, childcare and women in politics, Warren had a lot to say, and her supporters had a lot of cheers to come with it.

Abby Rundquist, a Drake University student, was among the supporters who attended Warren’s watch party. Prior to the start of the debate, Rundquist told Elon News Network the main issues she was hoping the candidates would discuss. Rundquist said both climate change and health care were a priority to her.

“I want to be a doctor, but I have to recognize that our healthcare system makes me so I wouldn’t be able to treat more than half of the population in the U.S. so universal healthcare is super important,” Rundquist said. “Not only the rich get sick, lots of people get sick so [Warren’s] plans for that are also really important to me.”

The candidate’s healthcare plans were discussed on the debate stage. Warren spoke of reducing the cost of EpiPens and various drugs including those needed to treat HIV and AIDS. While Warren continued discussing her plan, the crowd responded with claps and cheers. Rundquist was cheering herself.

Members of the audience said they were expecting tensions on stage between Warren and Sen. Bernie Sanders (I-VT). This comes as a result of recent reports that Sanders told Warren, in a private meeting in 2018, “a woman can’t be elected president.”

“We can do better than a Trump-led trade deal,” Sanders said. “Every environmental organization has said no to this trade deal given it doesn’t even have the name, climate change, in it.”

Few Warren supporters in the audience clapped in response to this comment. However, they cheered loudly as Warren discussed her thoughts on the trade deal and specifically spoke to Iowans in the audience.

“We have farmers here in Iowa who are hurting,” Warren said. “This new trade deal is a modest improvement, Sen. Sanders said so himself, and it will give some relief to our farmers and workers...we accept that and get up the next day and fight for a better trade deal.”

It may not have seemed like the most memorable moment for everyone watching around the country, but for Iowans, and those in the watch party, their daily lives in many cases depend on such legislation.

The anticipated spirited debate between the two senators started as Sanders responded to the allegations.

“I didn't say it. And I don't want to waste a whole lot of time on this, because this is what Donald Trump and maybe some of the media want,” Sanders said. “Anybody who knows me knows that it's incomprehensible that I would think that a woman cannot be president of the United States.”

Warren responded saying she disagreed with Sanders's statement, adding, “Bernie is my friend, and I am not here to try to fight with Bernie.” Warren said. “I think the best way to talk about who can win is by looking at people's winning record. So, can a woman beat Donald Trump? Look at the men on this stage, collectively, they’ve lost 10 elections.”

The audience at Warren’s watch party erupted in a combination of cheers, applause and chants. Rundquist said this interaction between Warren and Sanders was handled quite well.

We're in the first commercial break of the #DemDebate and the crowd at the @ewarren watch party chants, "VOLUNTEER," and "WARREN." Even included a woman standing up shouting, "I'm knocking on doors tomorrow!"

“I think she handled it really respectfully,” Rundquist said. “I think that it was a moment that could have been really tense and could have led to kind of a knock on her campaign, but she handled it gracefully.”

In her closing statement, Warren mentioned other topics that were not discussed on the debate stage. These included equality for the disability community, gun control, children in poverty, transgender women of color, student loan debt, struggling farmers and mental health.

“Hope and courage. That is how I will make you proud every day, as your nominee and as the first woman president of the United States of America,” Warren said.

The supporters and staffers who were still at the watch party, immediately erupted applause, some even standing up in celebration.

Rundquist said she thought all of the candidates discussed the majority of the most important issues to her.

“I think overall [Warren] was the obvious star, which was great to see and I think that she did a really good job separating herself from Bernie Sanders and getting out ahead of Pete,” Rundquist said.