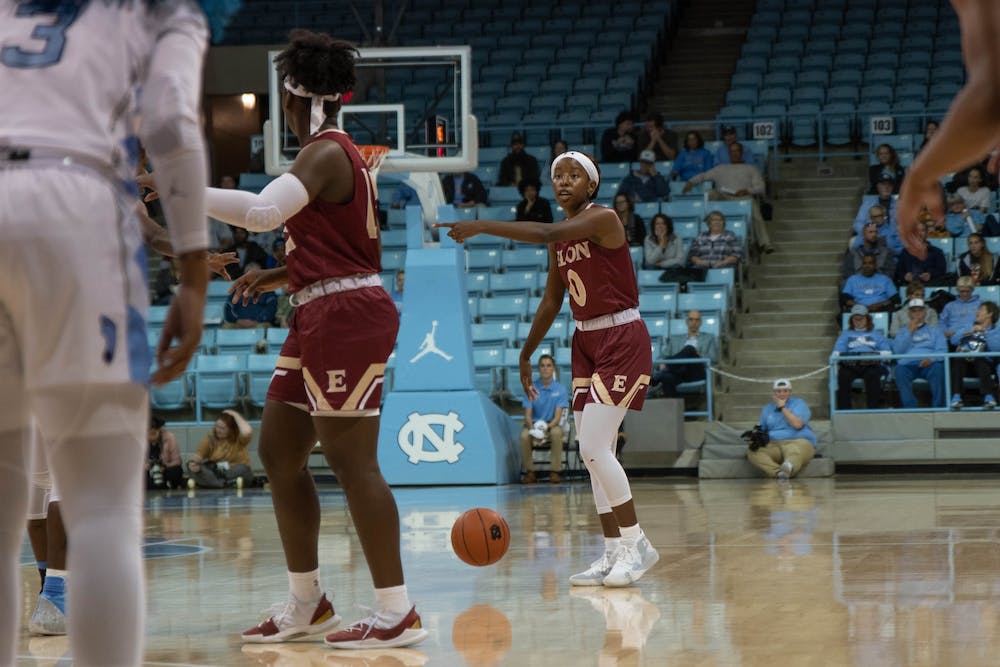 
Guard Brie Perpignan directs the Elon offense in a game against the North Carolina Tar Heels on Nov. 22, 2019. The Phoenix lost 76-46.

“It's great to be home,”. Smith said. “Just really excited to be back to play in Carmichael and proud of our team and our effort tonight.”

This matchup marked the first time that Coach Smith returned to Carmichael Arena and did not face her mentor and former head coach. UNC head coaching legend Sylvia Hatchell resigned from the Carolina program prior to the season. Courtney Banghart is in her first season for the Heels after previously coaching at Princeton University.

Smith is a legend in Carolina lore, as she nailed the game-winning three-point field goal to clinch the Heels’ only national championship in 1994. Her number 23 jersey hangs among the greats in the rafters at Carmichael Arena.

The Phoenix stayed in the game through the first quarter despite some less-than-stellar execution. Redshirt junior guard Jada Graves recorded two steals for the Phoenix, as the defensive tenacity that the Phoenix has displayed continued its run in Chapel Hill.

The second quarter opened the game up in favor of the Tar Heels, with the Heels taking a 36-21 lead to close the first half. Graves also ended the half as the leading scorer for the Phoenix with six points. Senior guard Madinah Muhammad finished the half with nine points as the Heels’ leading scorer.

Carolina came out strong in the second half, pushing the floor and scoring at a high clip. They increased the lead to 23 points halfway through the third quarter. A kicked ball violation with roughly three minutes to go in the third quarter resulted in tensions between sophomore guard Brie Perpignan and Muhammad which led to a double technical foul.

By the end of the quarter, the lead was pushed to 24 following a last second layup by the Heels.

The fourth quarter yielded the same results, with Carolina keeping their foot on the gas. The Tar Heels would emerge from the contest victorious by a score of 76-46.

“We definitely were outmatched with size and we struggled a little bit in the category of rebounding and that was an area where we really wanted to focus in on but overall pleased with that effort and we will definitely take what we learn from this game and get better,'' Smith said.

The schedule doesn’t get any easier for Elon as they face tough tests in Wake Forest, UNLV, and NC State in the non-conference schedule before attacking the CAA slate.

Elon’s next game is against the Wake Forest Demon Deacons on Monday, Nov 25 in Schar Center.