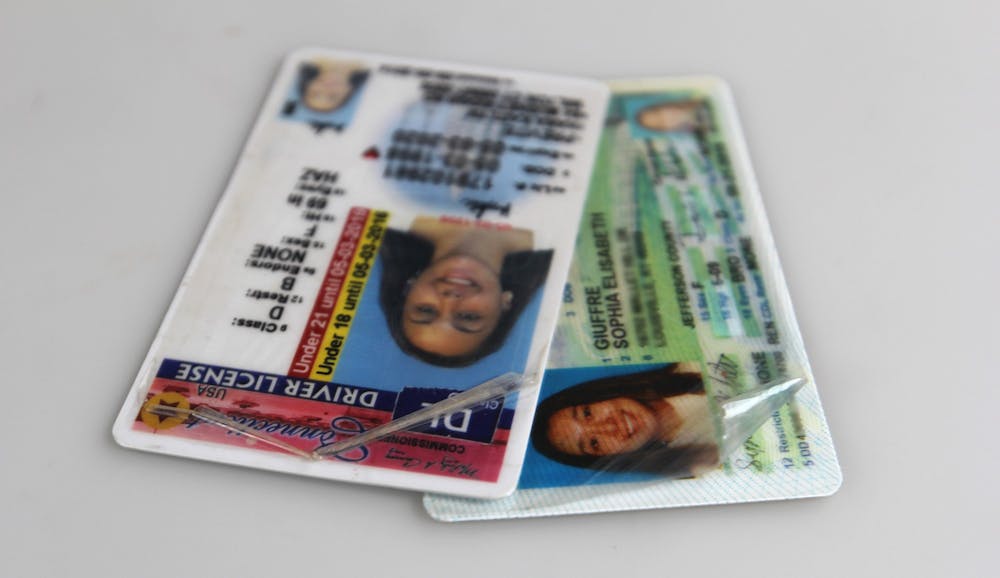 Senior Sophia Giuffre went to Circle K to purchase a case of White Claws and a water bottle when an employee behind the counter began peeling the edges of her license. The employee thought the ID was fake.

“Once you turn 21, you want to show people your ID. It’s real. I’m not doing anything illegal,” Giuffre said. “It was just so frustrating because it’s not like there was anything I could do about it. … She ruined my ID.”

The recently turned 21-year-old, Giuffre said she renewed her ID in August after returning from Elon University’s Study USA program in Los Angeles. That was approximately a month before the Circle K incident on Sept. 20.

"Once you turn 21, you want to show people your Id. it's real. i'm not doing anything illegal. It was just so frustrating because it's not like there was anything I could do about it."

According to Erin Bean, a special agent with the North Carolina Department of Public Safety’s Alcohol Law Enforcement, “There is not a specific general statute against defacing an ID.”

Alcoholic Beverage Control laws state that employees of a licensed establishment are not liable for holding a patron’s ID for a “reasonable length of time” if they believe it is fake. The only employee requirement is to inform the customer of the reason for their actions.

“We encourage employees to physically hold the ID in their hand, compare the photo to the person presenting it and check the ID for irregularities,” Bean said. “If the employee suspects the ID is fraudulent or altered, we recommend they simply deny sale or ask the person to leave.”

Any establishment licensed by the North Carolina Alcoholic Beverage Control Commission is allowed to “refuse sale of any alcoholic beverage as long as the refusal isn’t based on race, religion, color, national origin, sex or disability,” according to Bean.

Before this incident, Giuffre said she never had any issues purchasing alcohol with her ID. According to Giuffre, the employee at the counter didn’t ask for another form of identification to verify her age, although she had a federal ID — a passport card — with her.

After peeling back the driver’s license, the Circle K employee called the town of Elon Police Department. According to Bean, there is no specific protocol law enforcement take in the case of identification defacing.

Elon News Network contacted the Circle K in Elon and was told to “contact the corporate number.” Circle K’s Southeast Division did not respond to two phone calls, a voicemail message and an email regarding the incident.

According to Giuffre, Patrol Lt. Mike Brewer, who responded to the call, confirmed the ID’s authenticity, but said it did look fake.

“Unfortunately, that’s the Division of Motor Vehicles here in Kentucky. I have no ruling on that,” Ellie Giuffre, Sophia’s mom, said. “That’s not on me, that’s not on [Sophia]. I mean, that was a government-issued ID.”

After hearing about the incident from her daughter, Ellie called Circle K and began a back-and-forth with the regional office, which ended on Oct. 12.

Ellie said Circle K’s regional manager eventually apologized, and he agreed to cover Sophia’s travel expenses to Kentucky and the $12 cost of duplicating her driver’s license.

“He also said he will address the protocol his clerks use when checking IDs,” Ellie said. “I really hope he makes good on that and provides the proper training.”

Senior Hana Previte had a similar experience at Paulie’s Pub and Grill. Previte, 21, said during the first week of school the edges of her license were also peeled off.

“I showed [the bouncer] my ID, and he looked at it and ... he started peeling it down more. And he said, ‘This is fake. I’m taking it,’” Previte said. “He didn’t have another person look at it and didn’t call the police or anything; he just took it.”

Previte said the bouncer returned her license after she showed him a blurry iPhone photo of her passport from a study abroad application. Ever since that night, Previte carries her passport card with her in order to purchase alcohol.

“It was just frustrating because it just kind of ruined my night,” Previte said.

Paulie’s manager Tammi Jaskulski said the bar follows ALE guidelines when trying to verify whether or not an ID is fake.

“We bend them front and back to see if the little plastic stuff comes up, and then we try to peel it with our fingernails, each corner, and then we have a scanner we run them under if we still think it’s fake after that,” Jaskulski said.

North Carolina law states that the consequences for an establishment selling alcohol to minors could include the suspension of the establishment’s license or a Class 1 misdemeanor for the individual who made the sale.

Jaskulski said all individuals who sell alcohol at the establishment have to go through ALE training sessions — a decision made by management after Jaskulski received a $2,000 fine for selling alcohol to an underage customer. The case was dropped, but Jaskulski said the bar “will still get a ticket.”

Jaskulski said on a Tuesday night, Paulie’s confiscates between 20 and 25 fake IDs.

“If I was coming to you and I was underage and you got a ticket, how would you feel?” Jaskulski said.

The Fat Frogg, another bar in Elon, also receives its ID training from the North Carolina ALE. Owner Jason Thomas said he and his staff try their best to do their “due diligence” in looking out for fake IDs.

Thomas said his establishment has accumulated a stack of more than 200 fake IDs. He said if he thinks customers are using a fake ID, he will hold it until they show another form of identification and will refuse to sell them alcohol or ask them to leave.

“Destruction of an ID, you’re not supposed to do that. We don’t do that,” Thomas said. “As a bar owner, you do what you can to protect yourself.”

According to a 2018 study by the Center for Alcohol Policy, underage drinking costs the U.S. almost $57 billion annually — $14.6 billion of that being lost work costs.

Thomas said he and his staff try to be proactive by carding people at the door and have noticed the consequences of being strict.

“We’ve lost business because they know they can go somewhere else and probably get in,” Thomas said. “It hurts, but this is our family business. I can’t serve underage kids if I can help it.”