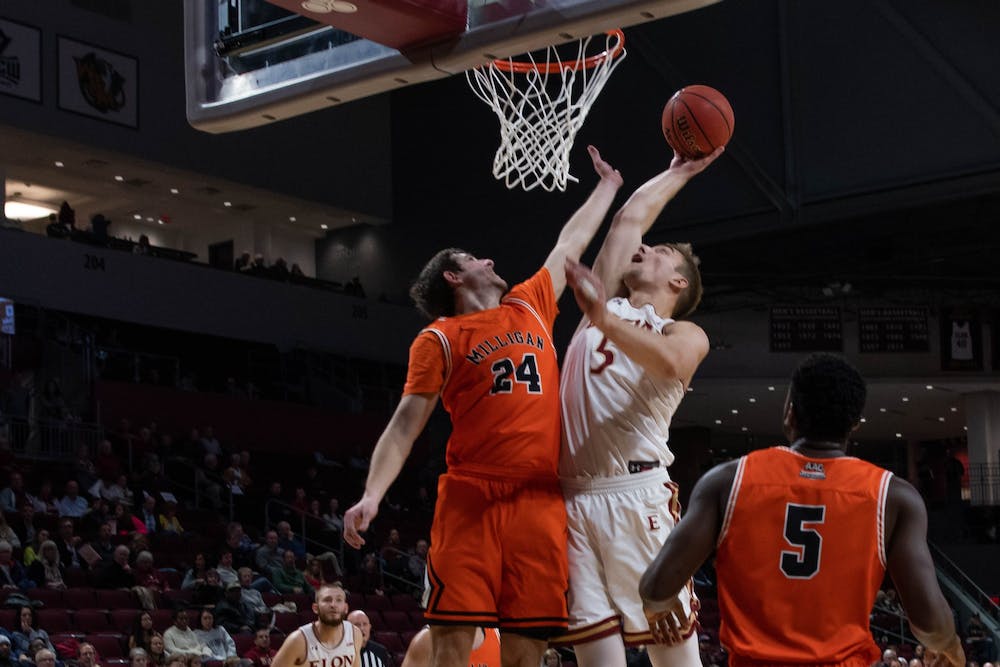 
Elon forward Federico Poser converts a layup off an offensive rebound in the first half against Milligan.

Behind a double-double from Stanford transfer Marcus Sheffield II, Elon had 26 assists as a team, leading to many open looks. These open looks led to a three-point barrage, as the Phoenix made 16 three-pointers, connecting on 40%.

“I’m proud of the way we shared the ball. I mean, guys continue to make the right play over and over again, even when we built the lead midway through the second half when guys could get a little bit selfish or like a ‘my turn’,” Coach Mike Schrage said.

The Phoenix grabbed control from the beginning. Elon took a 45-27 lead at halftime, a lead that they never relinquished. Junior forward Simon Wright was dominant from the beginning of the game, scoring a career-high 16 points on an efficient 7 -8 shooting performance, while also adding in seven rebounds.

The win improved Elon’s record in the Mike Schrage era to 2-0, helped by a very strong freshman class, including point guard Hunter McIntosh and forward Zac Ervin. Ervin scored 14 points off the bench, including a trio of three-pointers. McIntosh added 12 points and four assists, building off a strong first game against Mars Hill University.

“[The freshman class] all have good qualities that set them apart,” Sheffield said. “The main thing is they really play hard and play together. They’re a great bunch.”

Elon played very tight defense, holding Milligan to 54 points on just 31% shooting. The Phoenix held the Buffaloes scoreless nine possessions in a row as part of a 20-0 Elon run in the second half.

“When we get three stops in a row, we call it a kill. We got three kills in a row and that speaks for itself on the 20-0 run. When we got two stops everyone on the bench [says] kill time,” Wright said.