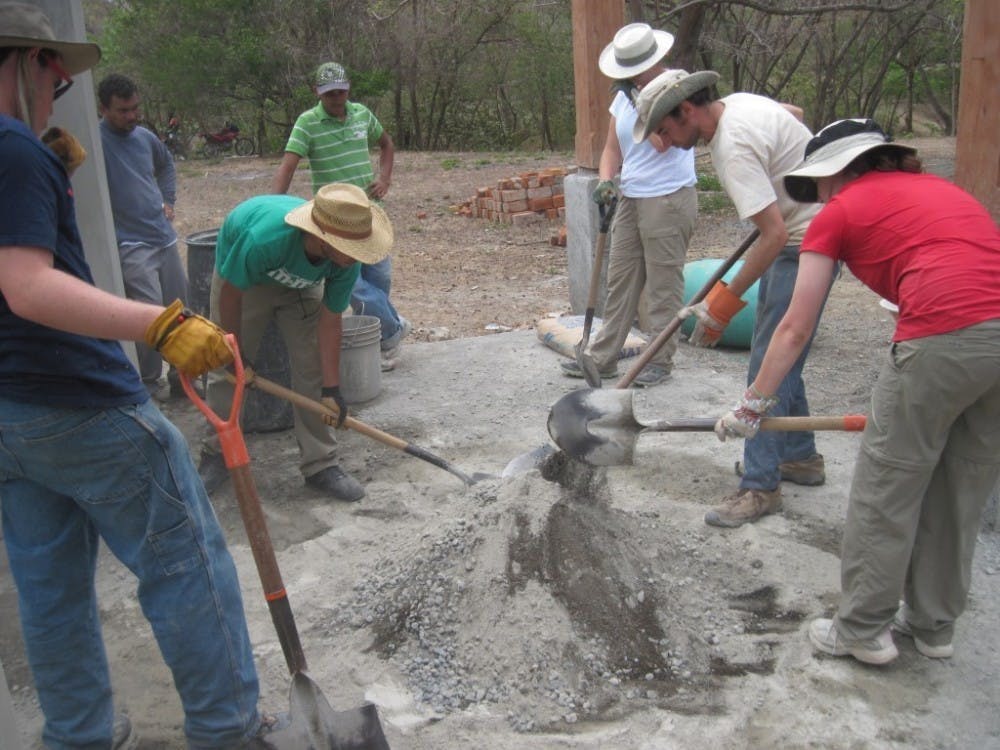 In March of last year, junior Ashley Billie watched the landscape of the Pine Ridge Reservation reflect the blood orange hues of the South Dakota twilight sky. While watching what she said she considers to be the most beautiful sunset she has seen, Billie said she felt a newfound responsibility to help communities other than her own after her experience with Elon University’s Alternative Breaks.

Billie realized her passion for service through Elon’s Alternative Break program, which helps students immerse themselves in new communities through domestic and international service learning. Trips take place during spring and fall breaks and range in cost depending on the destination.

Alternative breaks by the numbers

$100-600 is the cost range for domestic trips that take place during spring and fall breaks.

$1,000 is the minimum cost for international trips that take place during spring and fall breaks.

“It was a lot of physical labor, but it was totally worth it,” Billie said. “It definitely sparked my passion for service learning and service trips because after that, I was like, ‘When can I go on the next one? When can I lead one?’”

Billie said she gained new perspectives after leaving the East Coast for the first time to go on two Alternative Breaks, one to South Dakota and one to rural Appalachia.

“It was so interesting to see the juxtaposition of [leaving] Elon’s bubble, and now we go to the reservation where there’s no GPS, some houses don’t have running water, some houses don’t have plumbing,” Billie said. “Culturally, they have so much to bring to the table, in that, historically, we have marginalized them, and they aren’t able to sometimes express those voices.”

Kyle Anderson, Elon alum and assistant director of student community engagement programs at the Kernodle Center, said his commitment to service dates back to his participation in the program and other volunteer opportunities during his time at Elon. Although Billie was quick to note that her participation in Alternative Breaks was impactful, Anderson said other students may not share that perspective at first.

“Folks don’t always know the impact it has right away. It might take a little time after they get back and process the experience,” Anderson said. “Reflection is very important for people while they are away, … but you often don’t know what impact it had maybe until weeks, months, even years later.”

Anderson said his own participation in Alternative Breaks as an Elon student allowed him to develop an appreciation for how the program changes participants for the better.

“I went on an [Alternative Break] program my senior year of college in Tennessee, and I had never seen rural poverty up close before, so that was just a powerful experience,” Anderson said. “I went with a really great group of students, so it was a really great chance to connect with people on a deeper level and build friendships.”

Anderson said he uses his current role in planning Alternative Breaks to improve the understanding current Elon students have of less privileged communities.

“It’s important to be exposed to people with different viewpoints, different identities, and I think Alternative Breaks, in a short-term fashion, can give some exposure to that, which is really valuable,” Anderson said.

He said he finds that having such experiences will make students more inclined to return to Alamance County and continue service initiatives within the community.

"My hope is that students get that exposure and then can come back here and make that impact locally."

Assistant Director of Community Engagement Programs at the Kernodle Center

“My hope is that students get that exposure and then can come back here and make that impact locally,” Anderson said. “There are a lot of folks that will come back and want to get more involved in our office or just get engaged locally here in Alamance County.”

Anderson said each trip has a different angle or purpose. Some of the Alternative Breaks happening in the spring of 2020 are in Washington D.C., Atlanta, Appalachia, South Dakota and Costa Rica. Alternative Breaks typically take place on the East Coast due to pricing, however, there are a few exceptions year-to-year.

In addition to a wide variety of locations, Alternative Breaks focus on a variety of issues. For example, trips to Washington and Appalachia focus on urban and rural poverty, while trips to Atlanta and Costa Rica focus on immigration and community development respectively.

The program generally tries to maintain consistent attendance for each trip. Typically, a trip has eight participants, two student coordinators and two faculty advisers. However, as Alternative Breaks become more popular, Billie said the Kernodle Center hopes to expand those numbers and its budget.

Billie said she hopes to bring an opportunity like hers to the forefront of Elon students’ minds. She said Alternative Breaks are a great way to learn how to think about social issues and begin to solve problems as a community.

“What I learned going on an Alternative Break is not being afraid to speak my mind because when we were having discussions, they were heavy topics. We met some local teens from the local high school, and they were talking about how teen suicide is a huge, huge issue,” Billie said.

“It’s such a deeply woven issue that you can’t just snap your fingers and be like, ‘Oh, let’s get some mental health initiatives out there,’” Billie said. “Being able to process that then speak my mind about how I feel about that and work through potential solutions is, I think, a very important skill that I learned, being on that trip.”

Billie said she sees opportunities with the Kernodle Center as a way to help communities less privileged than Elon, which is something she encourages all Elon students to do. She said she believes service is not only a way to connect with a culture different than one’s own but also a way to understand a new perspectiveon privilege.

“An Alternative Break definitely opens your mind to other cultures because we are very intentional with the partners we work with and the cultures that we interact with,” Billie said. “There are other communities I think we should reach out to and help. Elon is in such a huge place of privilege … and I can use my voice, which is usually leveraged in society, to go out and help people for good. Service helps ground people and humble them.”