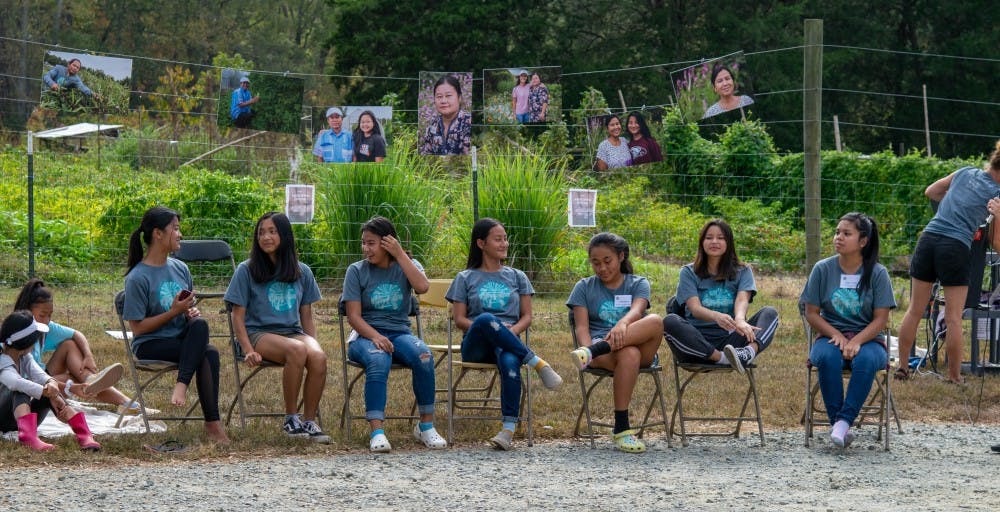 Photo by Benjamin Muse | Elon News Network
The Youth Group from Transplanting Traditions speaks on about their experience making the Audio Bites on Oct 12th, 2019.

CHAPEL HILL — Sunlight streams through banana leaves, illuminating bamboo structures filled with vegetables and tools at the Transplanting Traditions Community Farm. Just down the path from where students disembarked from their vehicles were steaming pots of traditional Burmese dishes, children at play and volunteers chatting with local community members.

This incubator farm, also a cultural center for Burmese refugees, hosts community events as a form of local outreach.

On Oct. 12, TTCF hosted community members, all wanting to learn about Burmese and Karen culture.

TTCF is a cultural community space in Chapel Hill, North Carolina, where refugee adults and youth have access to land, healthy food and the opportunity to build relationships with other refugees.

were provided to farmers as a result of food production done at Transplanting Traditions Community Farm.

While the farm is not open to the public without an appointment, community members were able to tour the farm on Saturday and taste traditional Burmese dishes made with farm-grown vegetables and hear about Burmese culture from refugees working at the farm.

Also on Saturday, the farm’s youth program presented its summer project called Audio Bites: Short stories on culture and foodways from Burma, to the public. All proceeds from the event went directly to the youth program and added to its $10,000 annual fundraising goal.

Storytelling as a form of activism

Audio Bites is a collection of audio stories gathered by eight young refugees this past summer. The stories explore identity, the experiences of first- and second-generation Asian Americans and use storytelling as a form of activism.

Vera Fabian, farm manager at TTCF, said she hopes community members were able to learn something about the sense of home the farmers have created at TTCF.

“I hope folks listened to the stories our teens collected from their families and community and learned a little about what it’s like to have to leave your home because of violence,” Fabian said. “In the words of our youth, we can all learn to be a little more understanding and forgiving and not hold grudges.”

Talar Hso, youth program coordinator and production assistant for the Audio Bites project, said the farm has helped her grow into her identity.

“The farm has helped not only to find my identity within my culture but by helping me stay connected,” Hso said. “You can lose your culture, your language, your food, but being here, I get to keep that and also share it with some of the younger generations.”

the number of Burmese refugees that work on the eight acres of the Transplanting Traditions Community Farm.

Hso, who has been in the youth program for four years, took an interest in TTCF after her brother got involved. As the program’s coordinator, Hso has helped mentor other youth and taken part in projects with Food Youth Initiative and Southern Foodways Alliance, both of which work toward food equality in their communities.

Student leaders in the youth program give tours of the farm, conduct cooking demos at farmer’s markets and hold conferences throughout the year. The goal of the program is to foster community and culture and give students a chance to grow their leadership skills — an asset for both themselves and the farm.

Sofia Thein, an intern at TTCF, said the farm helped her find her identity, giving her “an outside perspective” on her own culture.

Thein began as a tour guide on the farm and now works with Hso to mentor the “new youth.”

“I was just, you know, kind of a tour guide around the farm, and I also did demos and little conferences here and there, but I was pretty shy,” Thein said. “Now, I’m here actually mentoring the newer youth. I’ve gone to conferences, and now I see familiar faces, and now organizations are coming up to Talar and I and reaching out to us.”

Terry Tomasek, faculty director of the Colonnades neighborhood, planned a trip for Elon students to visit the farm after last year’s trip was such a success.

“Last spring, I heard about a farm tour that the Piedmont area farmers cooperative was sponsoring,” Tomasek said. “Basically, you got a carload of people and you drove from one farm to the other, and they had online printed up a list of all the different farms, so I invited students to go with me.”

Tomasek also wanted to integrate this year’s common reading, “Futureface”, into the curriculum because of its tie to Burmese culture.

the amount of food, in pounds, that is produced by Transplanting Traditions Community Farm.

“I thought this is fabulous because the common read is an author who has roots in Burma, and she writes about that in the book,” Tomasek said.

On Saturday, nine students traveled with Tomasek to spend the afternoon touring the farm, trying Burmese cuisine and hearing the Audio Bites project.

Freshman Abby Saracino, who lives in Colonnades, said she heard about the trip in a neighborhood email from Tomasek and that her favorite part of the trip was listening to Audio Bites.

“Their program gave them skills that they will use for the rest of their lives and gave them insight into a culture they may have been born into, but wanted to learn more about,” Saracino said. “It helped them grow tremendously, and hearing them talk about that impact was inspiring.

Saracino said she learned more about the conflicts faced by refugee youth after talking to Thein.

“Even when some immigrants, like the families of these youth, got to America, they continued to experience some of the conflict that was present in their home countries,” Saracino said. “One of the youth, Sofia, mentioned that the different ethnic groups of Burma had issues in Burma, and they followed her to the US. Even though the ethnic groups came from the same country and were in search of the same things in America, some feelings were hard to let go.”

Tomasek said she hoped students would walk away from the trip with a better understanding of the community in which they live.

“It’ll be a new experience for many. It might prompt other thoughts about how they may become engaged,” Tomasek said. “For example, a student might not be able to get to Chapel Hill, but they may decide they want to do something with a farm, and they could do something with our Loy farm, which is right here at the edge of campus.”