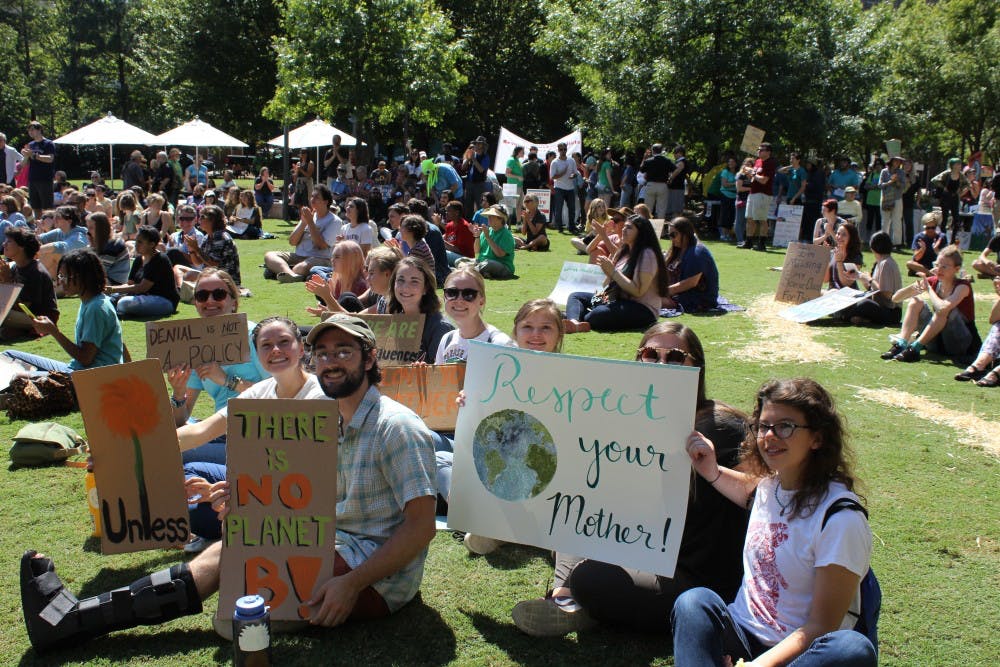 To read more about the Sierra Student Coalition, click here

Among the bustling College Coffee crowd sits a bare table with two students and a few papers laid out. The students are a part of the Sierra Student Coalition, a group of Elon students motivated to bring awareness to environmental issues through discussion, activism and service.

The papers are petitions with lines of student signatures, which support #Readyfor100, a nationwide grassroots movement to switch to 100% clean and renewable energy by 2050.

is the year the Sierra Student Coalition wants Elon University to commit to running 100% on clean and renewable energy by.

“We’re trying to get Mayor Tolley and the Elon Board of Aldermen to commit Elon to running on 100% renewable energy by 2050 or before then,” she said.

Bell stressed the significance of this movement, which is to ensure that the town of Elon is held accountable in making future changes.

Other North Carolina cities and counties have also started making the pledge. Hillsborough, Orange County and Buncombe County have already made commitments to #Readyfor100. Areas such as Chapel Hill have taken steps toward clean energy, moving away from their dependence on fossil fuels.

This petition is part of a series of global initiatives for transitioning from carbon-emitting energy sources, like coal and natural gas, to renewable sources of energy, like wind and solar.

According to sophomore Grace Contino, coalition member of #Readyfor100, there are ample opportunities for student involvement.

“It is really important that [students] sign and share the petition,” Contino said. “Climate change affects everyone, and we all need to play a role in doing something about it.” There are online and print versions of the #Readyfor100 petition which students can sign.

Both Contino and Bell emphasized the effect students’ involvement can have on the future of Elon.

“Living in a university town, we have a unique opportunity to allow our voices to be heard,” Contino said. “Many of us call Elon home for the majority of the year, so if this is an issue we care about, we should take action.”

Elon students can attend weekly Sierra Student Coalition meetings on Thursdays at 7 p.m., in addition to their semester events, which bring awareness to environmental issues. They recently attended the Greensboro Climate Strike in September, where activist groups gathered to protest the changes in environmental policy that demand global reductions in carbon emissions.

This was one of thousands of strikes across the globe, ignited by the recent UN Climate Action Summit. It is estimated that over four million people participated in the strikes, including over a dozen Elon students. Sierra Student Coalition emphasizes that combating climate change requires a united effort that starts at a local level.