Local Farm doing its part to fight hunger in the area 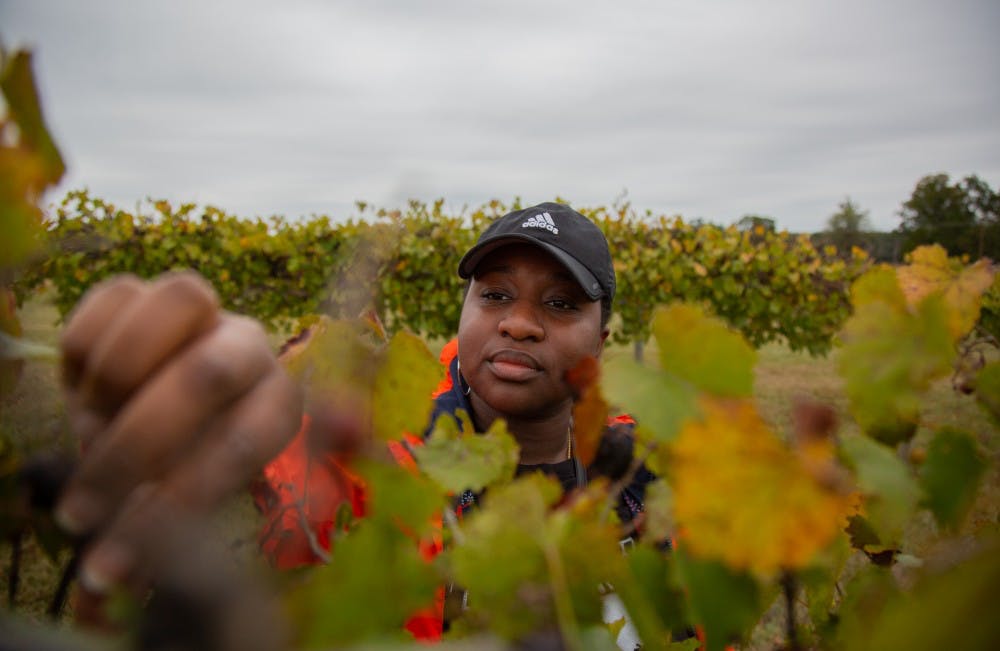 The 720 acres of woods, fields, streams and pastures of Guilford County Farm border one of North Carolina’s 349 food deserts, where some low-income families lack access to sustainable nutrition. However, Guilford County officials and community members are working to change that by donating fresh produce.

The harvest from the farm’s annual volunteer grape picking event, the Big Pick, which was held on Sept. 28 and Oct. 5, is donated to local food pantries and distribution services for residents who would otherwise not have access to fresh produce.

John Gladstone, superviser for Guilford County Farm, said that food pantries are a fantastic resource for non-perishable foods. They typically do not offer fresh produce, which is why access to healthy options is often an issue.

“People donate and collect canned foods and boxed foods and processed foods, which are shelf-stable, and they do wonders. They’re very inexpensive, and they can feed a lot of people, but there is a lack of fresh produce,” Gladstone said. “The distribution is an issue for a lot of these food pantries because they just can’t keep things that will rot quickly.”

“We’ve had as many as 40 come out just from Elon, and they have been there consistently every year,” Gladstone said. “Their attitudes are fantastic; they’re good pickers and they get a lot done.”

Several students from Elon’s chapter of the Alpha Phi Omega service fraternity were present at the event, including junior Carly Keane. She said she believes the event successfully combats local hunger and she is excited to make a difference in the community.

“It seems pretty organized, which is good,” Waldman said. “It’s not like they throw us in a field.”

According to Gladstone, other Big Pick volunteers range from families with young children to retired individuals looking to get involved. The turnout for the Sept. 28 event spanned multiple generations and backgrounds.

“It was a great mix of individuals, from A&T, Elon greek life and we had a family that had just moved here from Colorado,” Gladstone said. “They were looking to start a volunteer program in a new place. This was a way for them to meet people, to learn about their community and a way to kind of jump in and be a helpful part of their new home.”

Gldstone said that NC A&T is usually well-represented at the Big Pick, but according to Gabrielle Jackson, coordinator of the Aggie Source Food Pantry at NC A&T, this is the first year the pantry has directly partnered with Guilford County Farm.

The Aggie Source Food Pantry has been open since February 2019 and is open to all NC A&T students, regardless of enrollment status or income, Jackson said. The pantry is open three days a week and is sustained mostly by donations from the community, which can include fresh produce.

Jackson hopes NC A&T’s involvement with the Big Pick will make a lasting impact on the Guilford County community and on the student volunteers.

“I love muscadines.They’re actually one of my favorite fruits, but I also love the opportunity to expose the students at the university and in the community to something that they might not necessarily be familiar with,” Jackson said.

According to Anne Cassebaum, former associate professor of English at Elon and a neighbor of Guilford County Farm, much of the public is still unaware that the farm exists.

From 1935 to 2015, the land was known as Guilford County Prison Farm. Inmates worked there, selling grape juice and jelly. Even when the prison closed, the vineyard remained out of the public eye.

“It was something tucked off over there, and unless you had someone involved in some way, it was off your radar,” Cassebaum said. “So, whenever people come out there for the grape picking, they’re kind of stunned by how beautiful this open space is.”

“It’s an issue everywhere,” Cassebaum said. “We’re trying to shift the economy so more of our food is local.”

Gladstone said he hopes to see more volunteers at the Big Pick in the future to benefit the community.

“We would like several hundred volunteers to come out,” Gladstone said. “If we were to do that, we would be able to pick the entire vineyard in one event day.”

The fourth annual Big Pick produced approximately 1,500 pounds of grapes, Gladstone said. He said he considers the low-yield to be a result of the dry summer season.

Since the end of the Big Pick on Oct. 5, the vineyard has reopened to the public, meaning community members can now collect free grapes.

Farm officials have decided to host future Big Pick events on the last Saturday in September and the first Saturday in October every year in order to increase participation and give participants advance notice. The next Big Pick will be held on Saturday, Sept. 26 and Saturday, Oct. 3, 2020.

“It’s 800 wonderful acres, and it’s so beautiful,” Cassebaum said. “I want to see it stay that way.”