Elon Board of Aldermen candidates on goals, town-gown relations 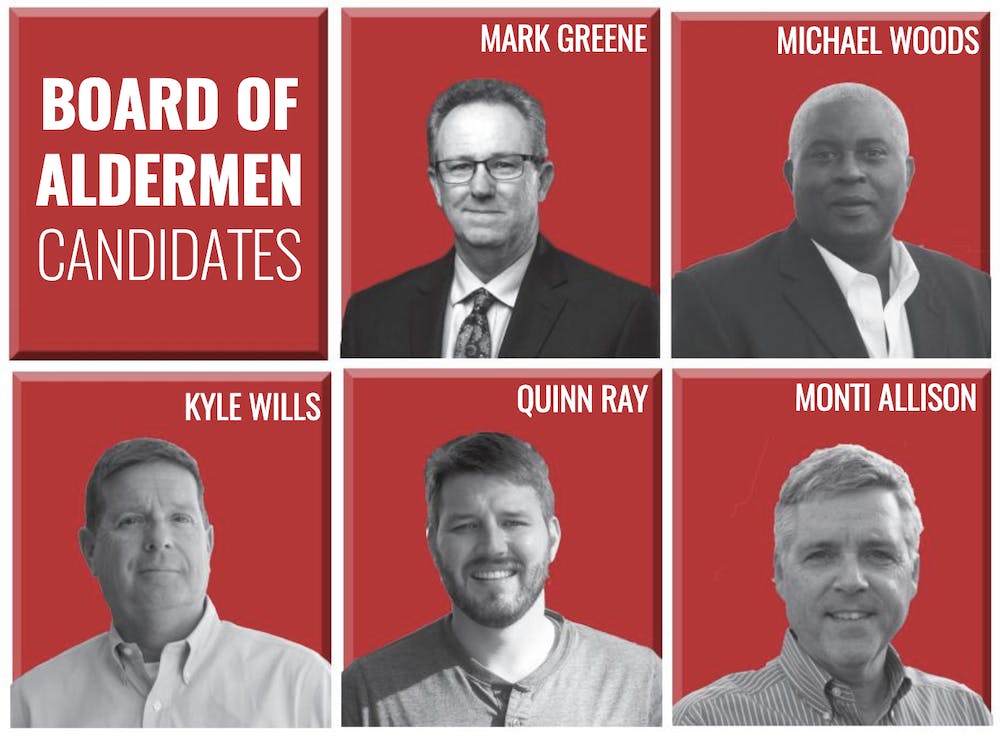 Candidates for the Elon Board of Aldermen

Election season in the town of Elon is underway. Residents will be voting for three Board of Aldermen members in the upcoming municipal general election on Nov. 5. Vying for votes is incumbent Alderman Mark Greene, and candidates Monti Allison, Quinn Ray, Kyle Wills and Michael Woods.

In the Nov. 2017 election — the last election with candidates for the Board of Aldermen on the ballot — 1,085 people voted in Elon according to the North Carolina State Board of Elections. Current board members Emily Sharpe and Davis Montgomery won the two open seats. Sharpe by 488 votes and Montgomery by 364.

Monti Allison — who works in the financial services industry for Lincoln Financial Group— has lived in Elon for 35 years. Allison is on the town of Elon planning board of adjustment according to the town website.

Mark Greene has been on the Board of Aldermen since 2007 and is seeking reelection for his fourth term. He also serves on the downtown Elon advisory board according to the town website. Greene works at the State Employees Credit Union and has lived in the town of Elon for 17 years.

Michael Woods has lived in Elon for the past five years and works for the cigarette company Liggett Vector Brands.

What is your top priority or main goal if elected?

Allison said he thinks analytically and his background in finance will allow him to effectively serve in office.

“I think the top priority is continuing to make sure that we're fiscally responsible,” Allison said.

Alderman Greene’s top priority is influenced by his past three terms and his approach to governing.

Ray said that one of his top priorities is to establish a committee that would further facilitate town-gown relations to moderate the stresses that the university puts on the town.

“So I want to have a committee that is constantly working with the town officials and the university officials to work together symbiotically,” Ray said. “Elon [University] has a great strategic growth plan and they execute it well, so with that being said we need to work with the town to know when this is happening before levels get critical.”

Wills said he cannot determine his main goal if elected to the board because he wants to consider what town residents want and he would need to be in office to do so.

“As a representative of aldermen you'd like to get in and learn a little bit more about how the process works and what the community people seem to think they want,” Wills said. “And just sort of listen and learn to evaluate and then bring that back to the committee is the way I would go about this thing.”

Woods said he wanted to focus on further developing the town and university together. He said that in Durham— his hometown — Duke University and North Carolina Central University play a key role in the city’s development.

“Growing the city but including the university,” Woods said is his main goal. “The university plays a major part in this community.”

How will you advance the relationship between the town and the university?

Allison said that communication between the town and the university is essential so that the university can thrive while keeping town residents in mind. He said the town should talk with students so they understand legislation such as the noise ordinance.

“In order for Elon University to reach its goals, the town has to be a part of that which means growth infrastructure has to be taken into consideration,” he said. “How it impacts the rest of the town citizens, so it's important that we continue to create that open dialog communications.”

“Anytime you have young folks around they're gonna party and [be] loud and that type of thing and it's going to happen,” he said. “We have put together a community effort with the town, the university and some citizens to try to kind of talk those things out like with noise ordinances.”

Ray believes there should be a committee established where the town residents and university students can have an open dialogue to communicate with the town and he can “listen, observe and learn.”

“I think a combination of the town and the university working together as the town committee,” Ray said.

“I think you have to listen, learn and evaluate what everybody’s take on it all is,” Wills said.

“By coexisting the students could have a quality of life as well as the residents,” he said. Students “bring a lot of finances to Elon and I think it should be a harmony between the students and the residents and we should grow the [town].”