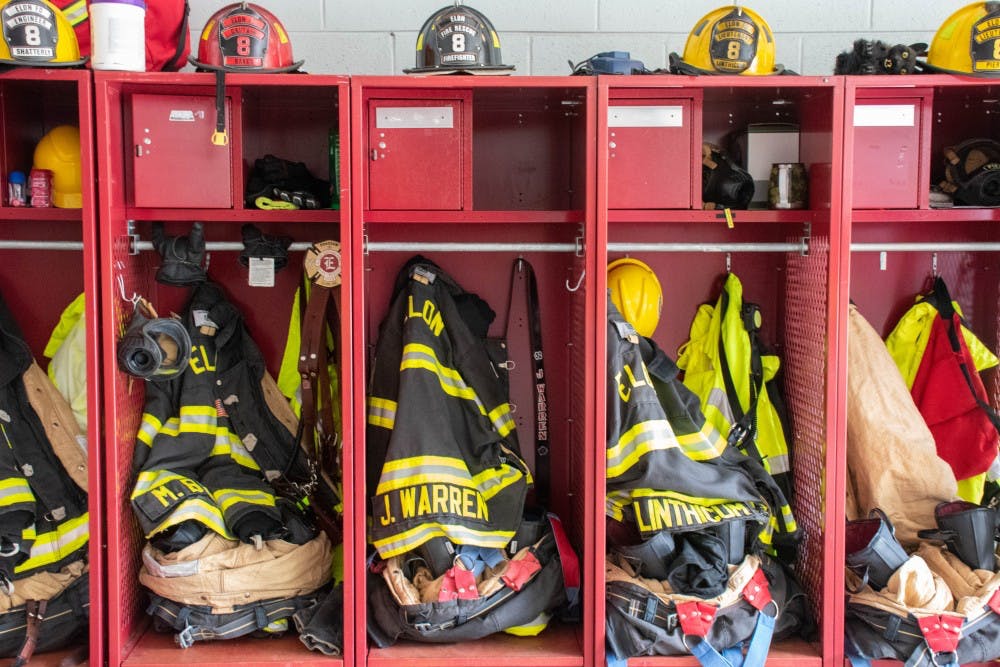 The word “firefighter” usually evokes a sense of heroism for those who rush into burning buildings and emerge from the smoke covered in ashes and soot. These brave individuals are first to respond to scene in any emergency, no matter the size.

Firefighters put themselves at risk every day to protect the people in their community. What most fail to see is the behind the scenes work of talented professionals like Josh Warren, a recently hired engineer at the Elon Fire Department.

Are responsible for vehicles that transport firefighters, carry equipment and pump water at fire scenes.

Fire engineers are responsible for maintaining firefighting vehicles that transport firefighters, holding equipment and pumping water at the scene of an emergency. They ensure that vehicles are constantly checked and run efficiently, ready for action whenever needed.

When they are not running fire or medical calls, they perform daily duties at the station.

According to Warren, fire engineers may perform routine maintenance checks on the vehicles, such as replacing vital fluids, checking equipment and restocking supplies in the medical bags. Most importantly, they drive the fire engines to the scene of the emergency which puts them at the highest risk compared to other members on the team. Fire engines carry precious cargo and equipment, including up to 750 gallons of water, meaning the role of the fire engineer is one of great responsibility.

“We have a very serious and important job, but it also is a very fun and enjoyable one too,” Warren said. He considers driving the firetruck to be the best part of being a fire engineer, even if it can be more dangerous.

“At some point in almost every little kid’s life, they dream of driving a firetruck,” he said. “I dreamed of it when I was younger, and now I am living that dream out as an adult.”

Warren was inspired to become a firefighter by his father who was a volunteer firefighter while he was growing up. Following in his father’s footsteps, Warren began as a part-time engineer for the Elon Fire Department. After two years at the station, he began to express an interest in becoming a full-time employee because of the comradery and companionship the fire department offered.

gallons of water are in one fire engine, as well as other important precious cargo and equipment.

“I realized that the guys at the department are not just co-workers but [are a] brotherhood. They truly are a family, and I wanted to be a part of that,” Warren said.

After a lengthy application and hiring process in addition to an agility exam to ensure he was equipped with the coordination and intuition necessary for the job, Warren received the good news that he had secured the full-time position.

Joining the team full-time meant that Warren was accepted into this uplifting family of firefighters. This fire department family resides in the Elon Fire Station, which Warren refers to as their home away from home. He said all the firefighters take pride in keeping the fire station clean, and this includes a dedication to daily chores.

While the daily chores may seem mundane, it is essential to making sure the Elon Fire Department is run like a well-oiled machine. Daily chores around the fire station include spot cleaning walls, floors and windows. Additionally, sleeping quarters must be straightened and kept in order.

Attention to detail is important in the life of a firefighter.

“We have daily training to stay on top of our skills that consist of basic fire-fighting skills, fire- ground tactics and the operations of the firetruck,” Warren said.

He mentioned that at the Elon Fire Department, they train for all types of emergency calls because they never know what the next call will be or when it will occur. Since firefighters are first responders, they cannot guarantee that the only emergencies they will attend to will be fires, but the main objective is always to help others.

This job is much more than fighting fires. It’s the little stuff that matters in life and the Elon firefighters get to witness that when they go into someone’s home just to do something as simple as changing the battery in a smoke detector.

Warren says being able to help the people of Elon is the best part about working with the community. Firefighters take pride in knowing that they are the first people you see when you call 911 for a medical emergency. They are the friendly faces that want to help calm those who are stressed and worried.

"It is refreshing to know that at the end of the day, we might have truly made a difference in someone's life."

“We do all that we can to help the people. It is refreshing to know that at the end of the day we might have truly made a difference in someone’s life,” Warren said.

Warren brings with him an extensive amount of knowledge of the department’s operations. The Elon Fire Department and the community that stands behind it wish Warren a career of happiness and continued growth.