Certified but still controversial, the debate over the legality of Elon Faculty Forward continues

Elon University files for a review of faculty members’ rights to form a union on campus, no plans to begin collective bargaining negotiations have been made 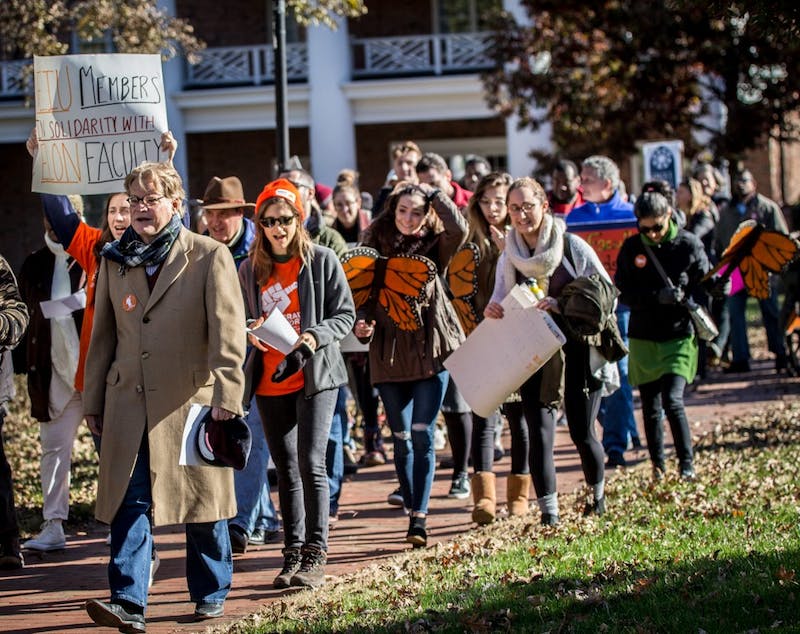 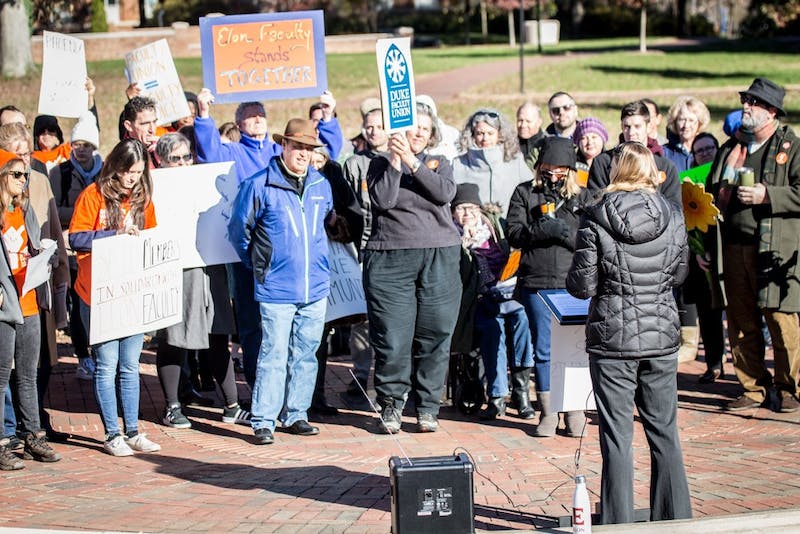 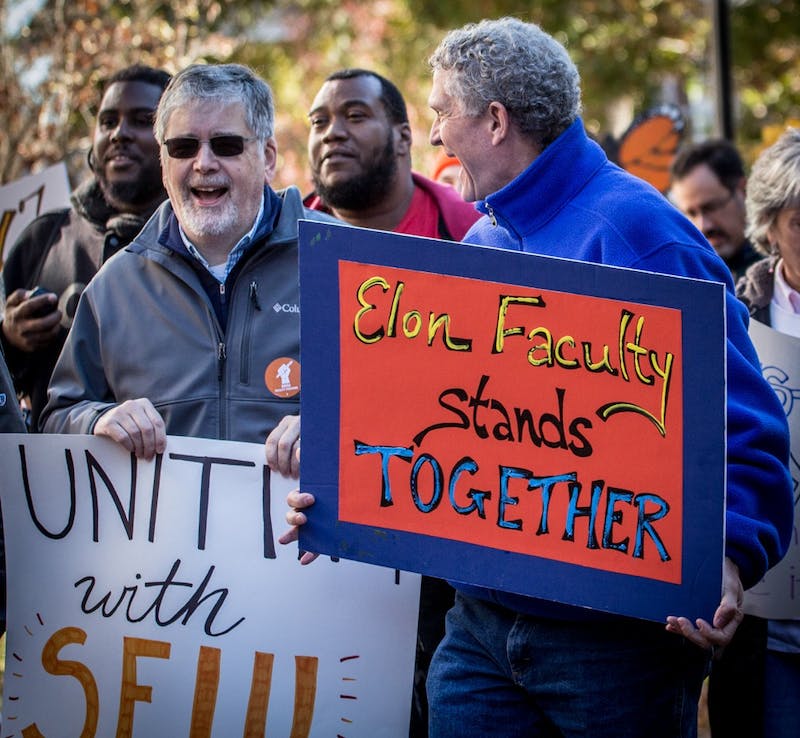 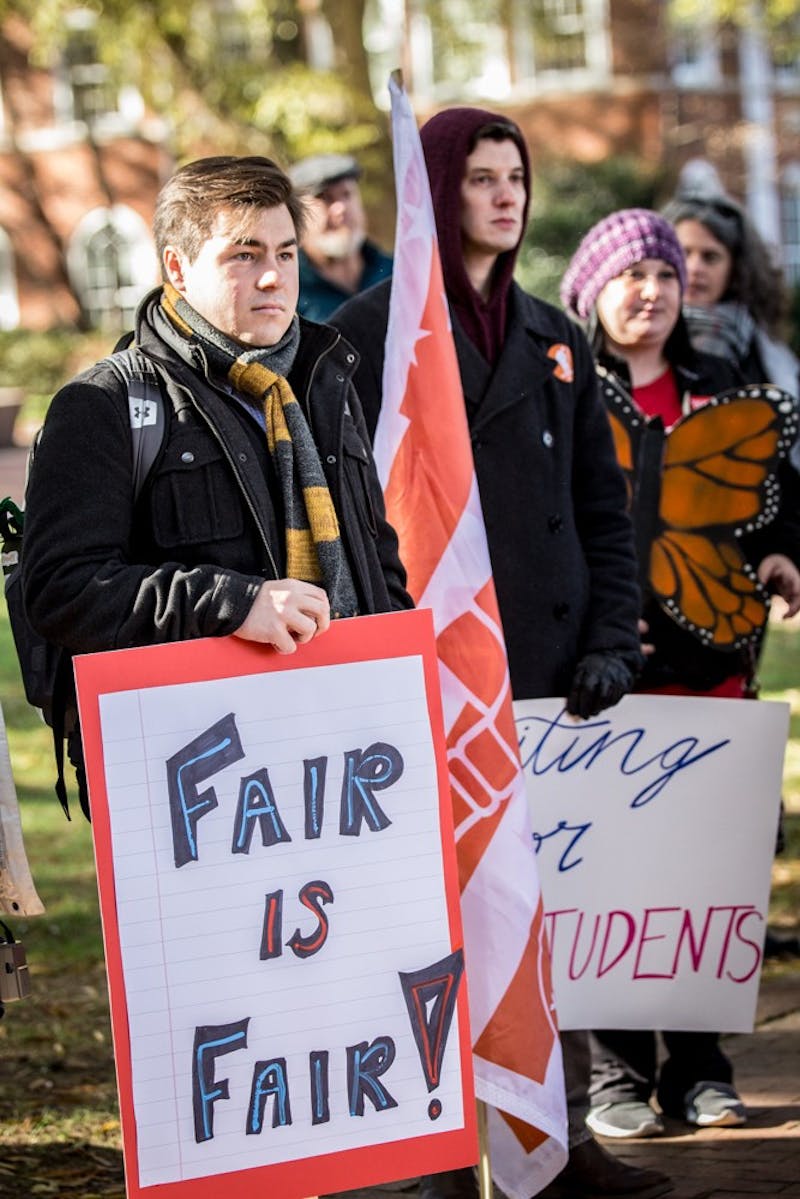 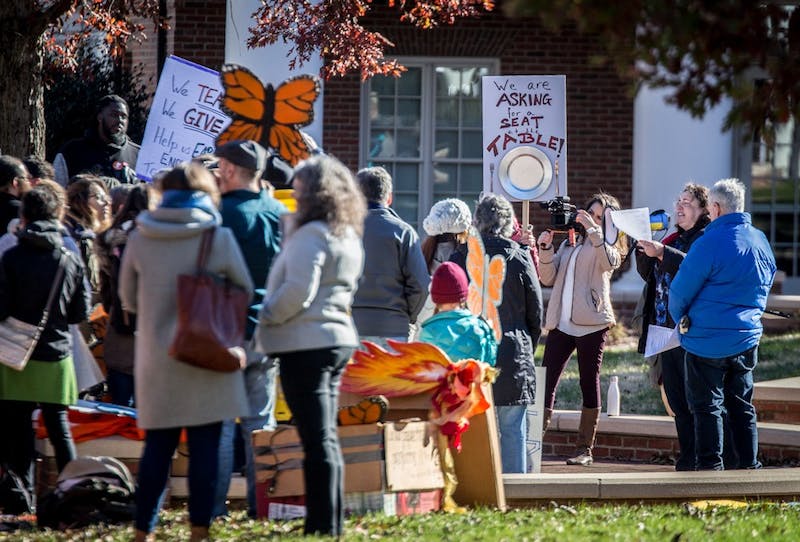 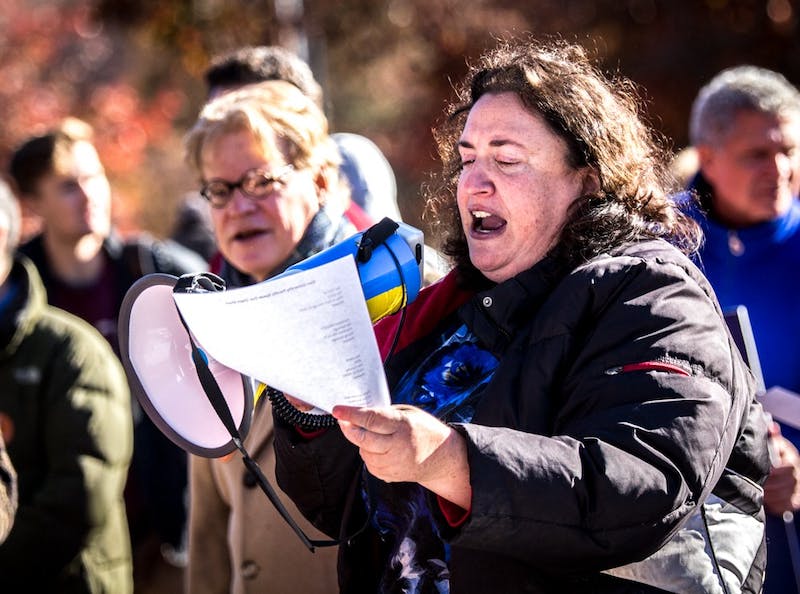 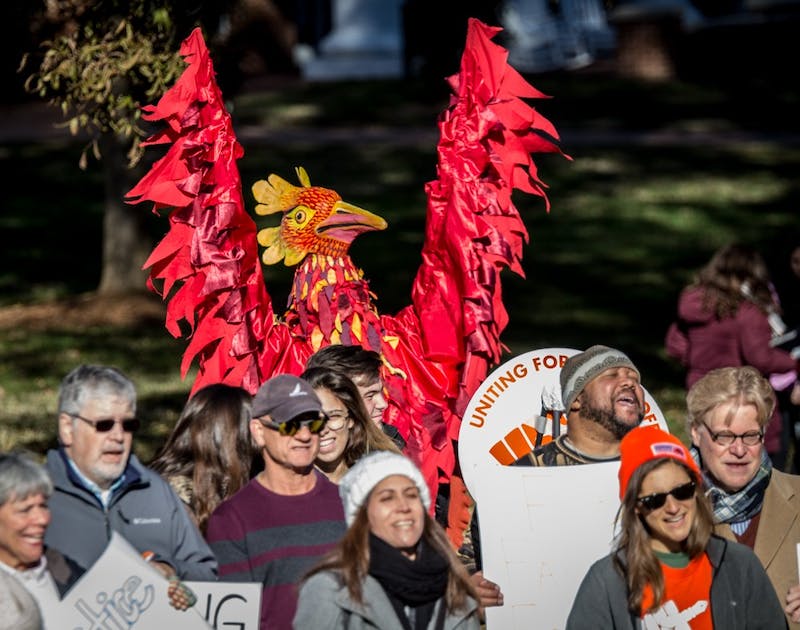 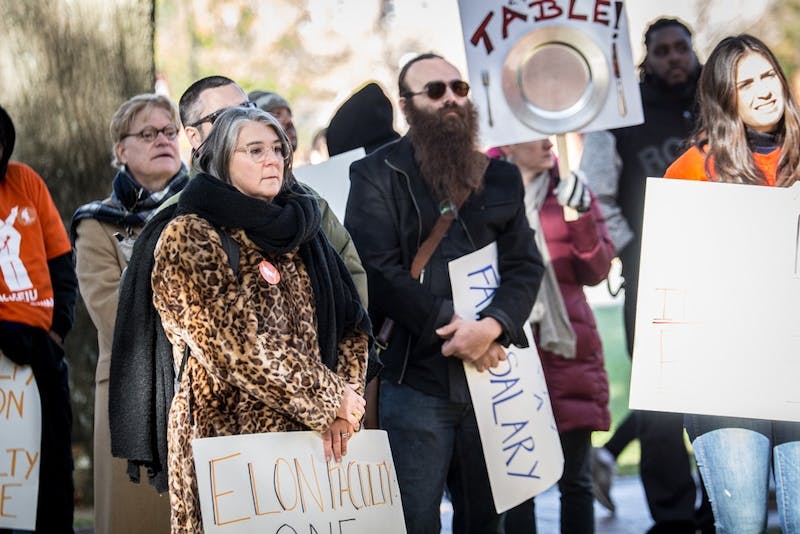 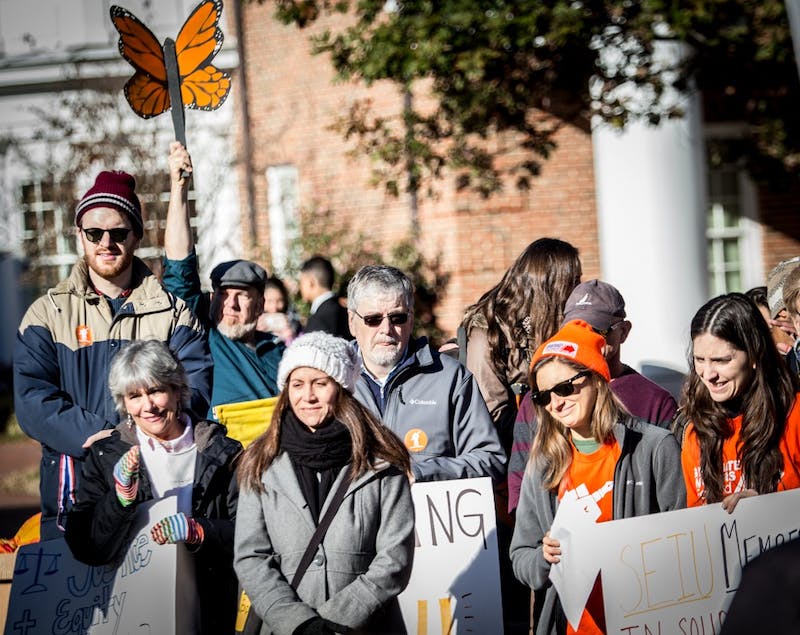 Elon Faculty Forward went public on Thursday, Nov. 29 by hosting their first public meeting. The goal of the event was to raise awareness and support for the movement that is trying to create a union for non-tenure-track faculty members by the end of the year.

By all legal means, there is now an adjunct faculty union on Elon University’s campus. Following nearly a yearlong back-and-forth between the union and the university, the regional National Labor Relations Board certified the unionization of the Faculty Forward movement.

is the negotiation of wages and other conditions of employment by an organized body of employees. Any collective bargaining agreement reached would affect all employees within the bargaining unit.

As a certified union, Faculty Forward, which is represented by the Service Employees International Union, can begin requesting collective bargaining negotiations with the university.

However, Elon’s administration continues to oppose the legality of the union’s formation. The university’s newest objection, officially titled a “Request for Review,” was filed just before 4 p.m. on Sept. 17.

One of the issues the review is challenging is the actual right of faculty members to form a union — claiming that faculty roles are managerial. The request has gone to the NLRB headquarters in Washington, D.C.

Under the 1935 National Labor Relations Act, the regional director’s certification of a union must be followed by collective bargaining negotiations. But the university’s “Request for Review” has continued to draw out the unionization process.

The administration has made it clear that negotiations with the union will not proceed at this time. A university spokesman declined to comment.

“Legally, Elon is allowed to go through all the procedural steps that the statute provides. That’s just part of the process that unions and universities have to go through,” said Eric Fink, associate professor of law. “Some unions might see a flaw in this because it gives the employer time to draw things out, but the employer deserves due process.”

The NLRB’s decision is expected to be announced in the next 12 to 16 months. In the interim, Faculty Forward is planning to continue campaigning for negotiations to begin.

Catherine Bush, assistant professor of biology, hopes that more public events will inform the Elon community about the union’s cause. She intends to hold these gatherings in an effort to keep the union at the forefront of the minds of administrators.

“We want to get to the table now, so we are putting the pressure on,” Bush said. “It’s time for that.”

The idea of an Elon faculty union began in a classroom in McMichael Science Center. Bush has been working with representatives of SEIU since March 2018 to begin an on-campus union.

“It’s been 18 months in this process. … We would like to just get to the negotiating table at this point and have the university respect the decision that was made by the adjuncts,” Bush said. “This is a long walk to equality. I carry with me the stories of adjuncts that need help right now.”

Since Faculty Forward’s first public event last November, the university has objected to the union’s formation at every stage of the process.

“Our goal, as always, is to continue building a better, stronger Elon for everyone. I simply do not believe a labor union will effectively support that goal,” said President Connie Book in a video message sent only to faculty and staff days after the event. “We do not want to undermine our shared governance with a system in which outside lawyers negotiate our future and the ways we relate to one another.”

To form a union, a vote must be held among all possible members. The university’s first objection was to the group of proposed eligible faculty. Following four NLRB hearings at the sub-regional office in Winston-Salem, the much-contested bargaining unit was decided.

In March, the union vote was finally held. Of the 283 faculty in the bargaining unit, 112 voted for the union, 68 were against it and 20 cast non-determinative challenged votes — a voting rate of 70.7%.

The university then filed an objection to the vote, which went to the regional NLRB office in Atlanta. On Sept. 3, nearly six months later, the regional office certified the unionization of the Elon Faculty Forward movement.

Scott C. Thompson, the acting regional director of the NLRB, wrote in his “Decision and Certification of Representative” document: “The Employer’s Objections and subsequent exceptions are best analogized to a house of cards on which every level of the house is founded on false or faulty assumption and thus pressing any level of the house would have been enough to topple the house.”

On Sept. 17, the university challenged the regional NLRB’s decision by filing a “Request for Review” with the national headquarters.

In a faculty and staff-wide email, Executive Vice President Steven House stated that questions related to Elon’s “unique system of shared governance were not fully evaluated by the Regional Director of the NLRB.”

The university’s “Request for Review” states that the acting regional director “incorrectly analyzed the managerial employee question at Elon, finding that Elon’s part-time, limited term and visiting faculty were not managerial employees simply because they did not make up the majority in Elon’s shared governance committees.”

The “shared governance committees” was in reference to the Academic Council, which includes an elected voting representative for part-time and adjunct faculty members.

a committee of faculty members tasked to formulate policies regarding different faculty issues for approval or disapproval of the general faculty.

House wrote in his email that “it would be antithetical to our collaborative model to have a group of part-time faculty whose terms of employment are determined by a collective bargaining agreement, rather than our shared governance model.”

Jill Auditori, instructor in political science and policy studies, is the lone representative of part-time faculty members. Auditori and 17 other faculty members make up the council.

“It is important that I stay informed and in everyone’s best interest I take a neutral position,” Auditori said. “I feel like I am most effective for all of my constituents if I’m able to work well with both administration, with my academic council members, the faculty in my department and, of course, the adjuncts I was elected to represent.”

Elon is requesting that the NLRB review the role of faculty members on campus. According to administration, faculty at Elon hold a managerial role and therefore are not eligible to form a union.

A similar argument was made by the administration at the private institution of the University of Southern California, when faculty members of the Roski School of Art and Design, in coordination with SEIU, attempted to form a union.

Like Elon’s administration, USC opposed the faculty vote and continually challenged the union, eventually bringing the case to the NLRB headquarters. In March, the office ruled in favor of the university — agreeing that the faculty of Roski held managerial positions.

Following the national ruling, SEIU decided to withdraw its petition to represent Roski faculty. The reason behind this decision was never made public.

In an email following the NLRB decision, USC Provost Michael Quick wrote “the Academic Senate, faculty committees, and faculty councils remain free to work with administration on compensation, benefits, and terms of employment. Faculty can continue to speak for themselves on those topics, without having to get union permission.”

Elon cited the attempted unionization case at USC in its “Request for Review.”

is a legal step of the unionization process that asks the NLRB to review a specific case.

According to Fink, who worked in labor law for six years but is not representing either party in this case, the NLRB’s decision on Elon’s case will depend on the information presented to the office regarding the role faculty plays in making decisions on campus.

“It’s usually a bad idea for federal courts to look deeply into internal institutional politics and representation, but the court’s decision will depend on the specific facts presented about non-tenured faculty representation and decision making at Elon,” Fink said. “Whether they think representation on the Academic Council is enough to make them managers, we will see.”

The Bureau of Labor Statistics has been tracking union membership since 1983. In the last 35 years, data has shown the number of “wage and salary workers” belonging to unions decreased by more than half — from 20.1% to 10.5% in 2018.

“There is an entire field of labor research that is trying to understand this phenomenon. Over the years, the industry of union avoidance has grown and that has helped employers crack down on union movements,” Fink said. “A combination of employer resistance and ineffective union response has definitely played a part in the national trend.”