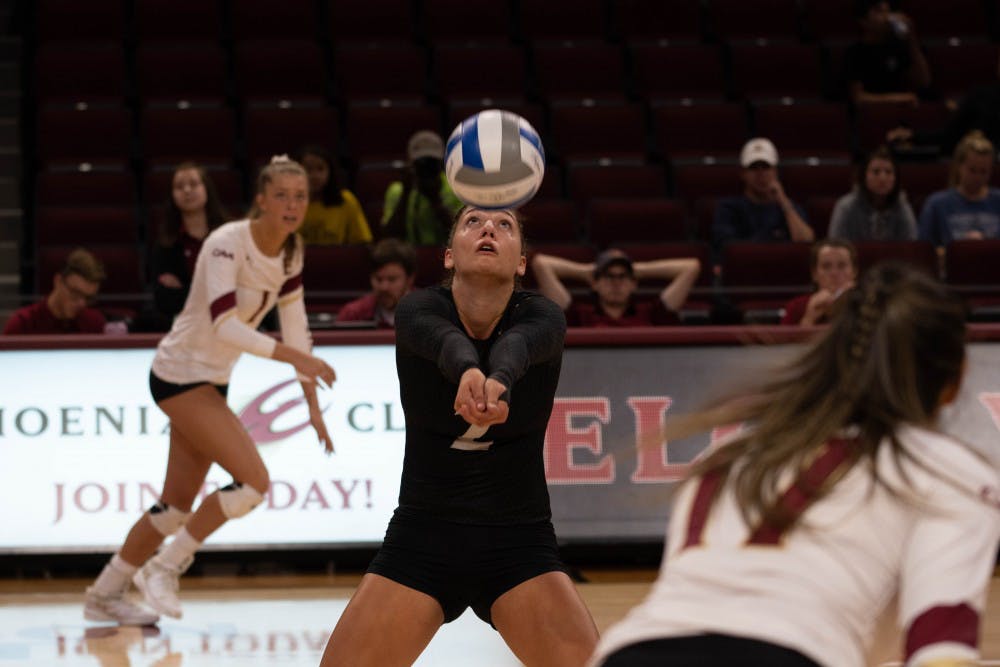 Elon volleyball (6-8) defeated the Northeastern Huskies (7-7) Sunday in Schar Center in five sets after being down 2-0. This win continues a 2-0 undefeated streak for the Phoenix for their first two conference games.

The Phoenix comeback was led by senior captain Nori Thomas, and sophomore outside hitter Leah Daniel. Daniel had an incredible game with 21 kills, 5 digs, and 3 blocks. Her 21 kills tied for her second-most in a game this season.

“We’ve done a lot of fifth sets which a lot of teams haven’t done in the preseason. So we know what it’s like to play in the fifth set and we know what the energy needs to be like to get there,” Daniel said.

As the Phoenix began the second set, they had to face a 4-0 start by Huskies. The Huskies were led by Brianna Daphnis and Athena Ardila who had six kills a piece. The Phoenix was able to come back to within four points, led by Thomas, who had four kills and a block, and Leah Daniel who lead with seven kills. But it was not enough and the Huskies won the second set 25-19.

The Phoenix came out with a purpose in the must-win third set. Daniel caught fire and racked herself up 12 kills. The Phoenix won the third set 25-22. The Phoenix player's confidence was apparent in this set seeing a superb display of teamwork on all of the players on the court.

In the fourth set, the Phoenix came out physical on defense. The set was back forth the entire way, however the Phoenix was the victor with a close 25-23 win. Finished by a kill from Daniel which forced the fifth and final set for the Phoenix.

The final set was met by intense energy from both the Phoenix and the Huskies. Thomas' leadership was also apparent in this set, she finished with nine kills, two digs, and two blocks for the game.

The Phoenix won the match 15-13. This game showed just how much the Phoenix had determination and perseverance to come back from a 2-0 deficit and win the game.

“I am very proud of the team, all of our players contributed and a lot of players who normally do not get to play got a chance to play and played well,” head coach Mary Tendler said.

The Phoenix look to continue their undefeated streak in conference play when they travel to the College of Charleston on Friday, Oct. 4.