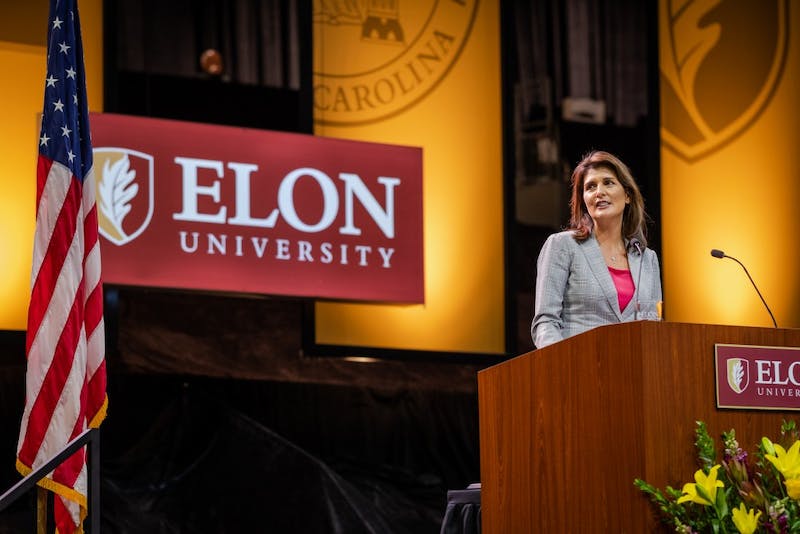 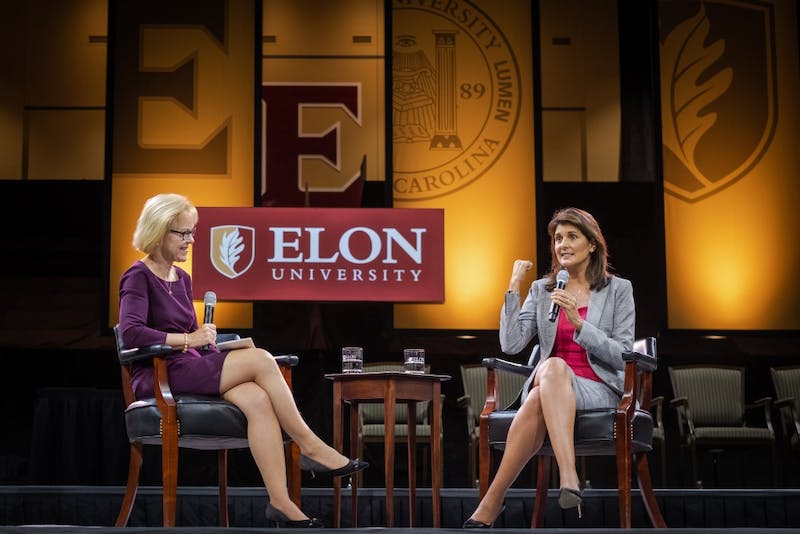 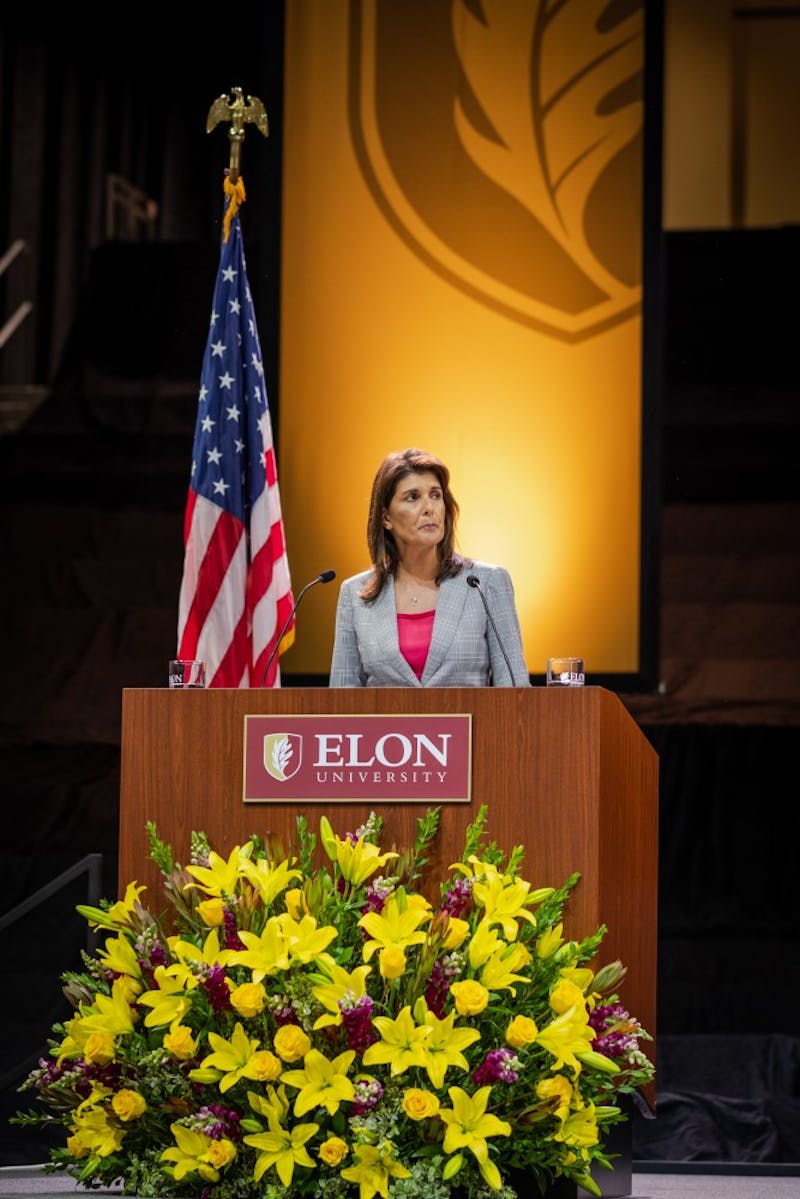 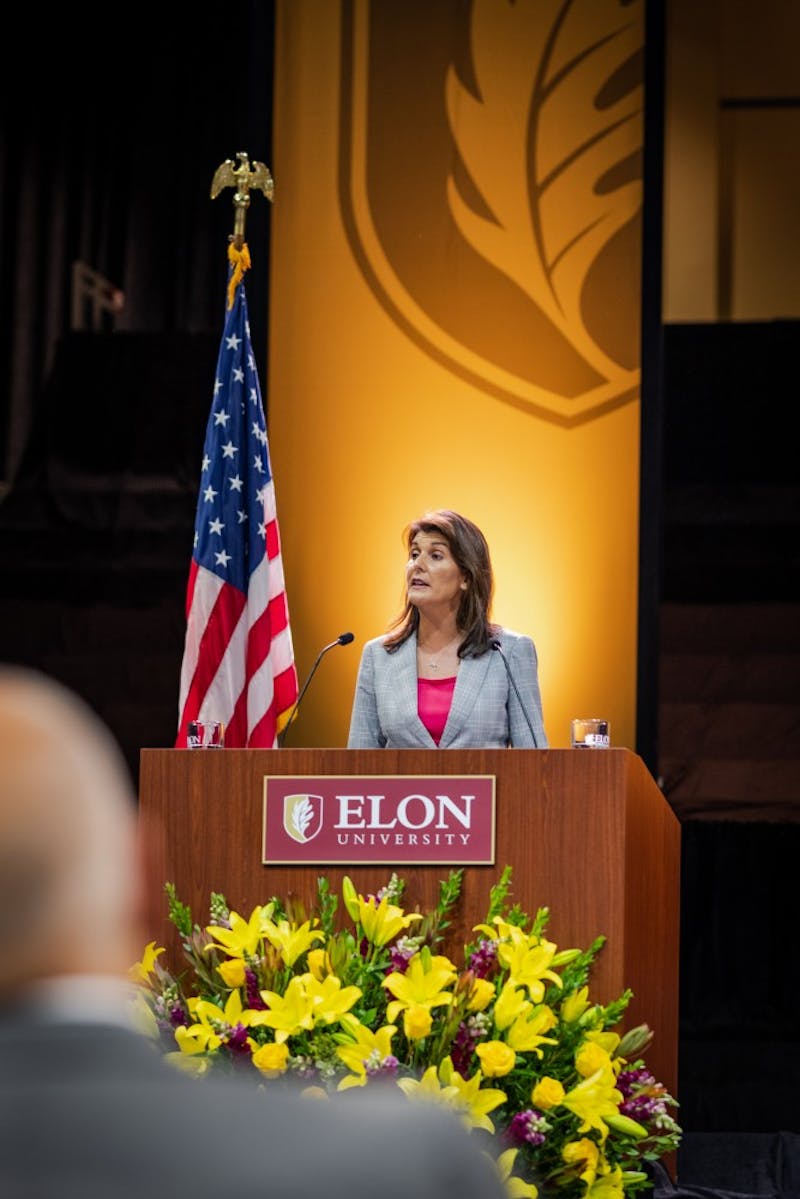 Former U.S. Ambassador to the United Nations and Governor of South Carolina, Nikki Haley, was the keynote speaker at the 2019 Fall Convocation on Sept. 27 in Schar Center. Her address comes as the opening of this year’s speaker series, the theme of which, “The Quest for Truth,” focuses on freedom of expression.

Haley said she is most concerned about the freedoms of speech, press and religion on college campuses. She cited her “new friend,” senior Gabrielle Cifelli, the Public Relations Chair of Elon College Republicans. Cifelli’s opinion piece about Haley included an anecdote about the “severity of political polarization” on college campuses, including Elon.

“Haley accepted the U.N. Ambassador position on three conditions,” said Jason Kirk, associate professor of political science and policy studies, in his introduction of the former ambassador. “One, that her role would be designated as a cabinet rank position, which hadn’t been done in a republican administration since President Reagan. Two, that she would serve on the National Security Council, and three that she could speak her mind.”

After waiting for the applause to die down upon her introduction, Haley immediately expressed her admiration of the university.

“Elon is growing and thriving,” Haley said. She conveyed that Elon being the number one study abroad college in the country, according to U.S. News and World Report, is “not just an accomplishment, but a smart one.” Haley said she saw new perspectives from her position taking her abroad that made “most arguments on Twitter seem small.”

Haley spoke of childhood memories that introduced her to “an early, very ugly form of identity politics,” such as the mistreatment of her outwardly Sikh parents, or the disqualification of both her and her sister, Simran Singh, from the Little Miss Bamberg pageant based on their Indian-American heritage. She said that later in her career, however, she was exposed to more dangerous expressions of hatred.

Most notably Ambassador Haley disclosed graphic details of what she considers to be human rights violations she saw across the globe during her time at the United Nations.

“In South Sudan the government uses rape as a weapon of war,” she said, adding that she spoke with a woman who had had a traumatic experience with the South Sudanese military. “I sat with a sobbing woman who told me about soldiers ripping her baby from her arms and throwing him into a fire,” Haley said. “She told me about being forced to eat the flesh of her own child.”

Haley acknowledged that America isn’t perfect but that in comparison to some middle eastern nations, it has made great strides in human rights and freedoms.

“When you see these things you value democracy,” she said. “It makes you appreciate the rights here in America.”

As Haley pivoted to discussing the discourse in our current political climate, she emphasized keeping American political disagreements in context, referencing the Arab Spring and how oppressive governments have forced citizens to speak out against the government. One such example, Haley said, was Tunisian fruit vendor Mohammad Bouazizi’s decision to set himself on fire.

“There is a growing tendency in our politics to see people who don’t think like we do as not just wrong, but evil,” Haley said. “But I’ve seen evil.” The ambassador talked about her view of Venezuela, saying it was once one of the wealthiest, most thriving democracies in South America, but “thanks to the socialism, corruption, and brutality of the government, it is now one of the poorest and least free countries in South America.”

Haley also referenced polarization as it relates to the interference of Russia in our national elections, and on elections across Europe. She said it is important to keep communication with Russia, but we cannot trust them.

“Russia will never be our friends,” she said.

At the conclusion of Haley’s remarks she said freedom of expression on college campuses is critical.

“Instead of yelling at each other for being wrong, ask them why they think the way they are and have that conversation,” she said. “You will become a smarter, more intelligent person when you understand both sides of an argument and when you respect it.”

Members of the Elon community that heard Haley’s remarks said they were impressed with the speech’s alignment with Elon’s values.

Dean of students Jana Lynn Patterson commented on this overlap. “She had some very important messages that are consistent with the messages we give students about listening to one another, taking time to sit down with one another, and really trying to understand and reach across that aisle,” she said.

“I think Elon needs to be and is a place that brings people of all viewpoints together for people to engage in critical thinking and analysis of different points of view and I think that’s what happened today,” he said.