MaGerk's celebrates one year in Elon 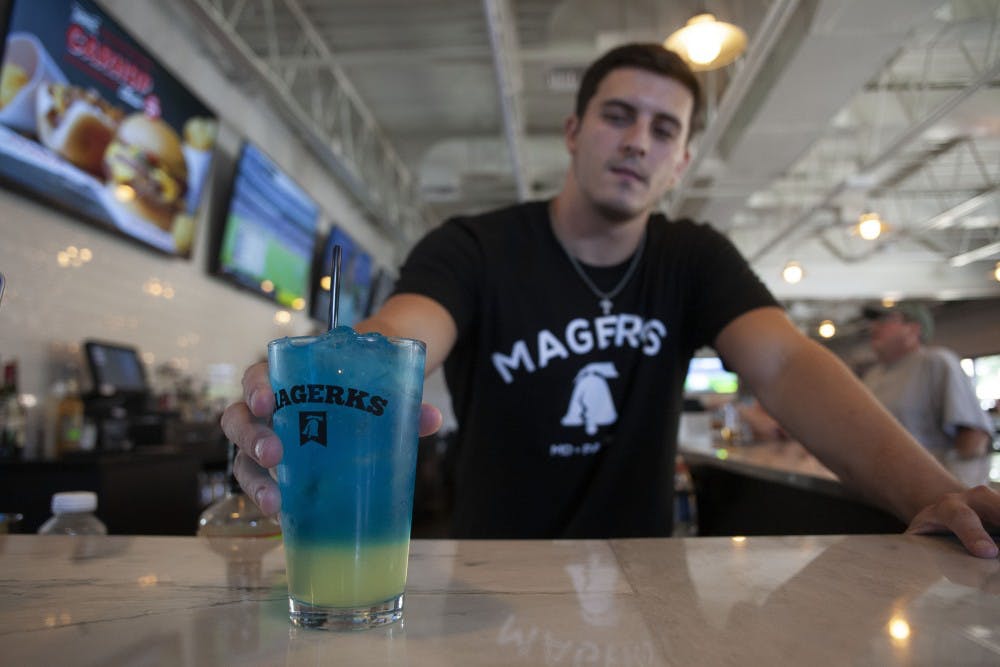 This month, MaGerk’s Pub & Grill will be celebrating its one-year anniversary. Both students and locals alike are excited for the milestone.

The Elon community is served by many small businesses like Pandora’s Pies, The Tap House and the Oak House. But a more recent addition to the scene is MaGerk’s Pub & Grill.

Most excited for its one-year anniversary is owner Jon Dolaway.

Three years ago, Dolaway dropped his daughter, Madeline, off for her freshman year at Elon University. While she went shopping for dorm supplies, the restaurant owner went shopping for his next location and a vacant lot caught his eye.

“There was a note on the door here. It said, ‘Call if you’re interested.’ So, I called…” Dolaway said.

Dolaway spoke briefly about why the site drew his attention.

“I figured this would be a great spot for the kids to enjoy football and eat some good food and have fun while hanging out with friends,” Dolaway said. “By the time she got back from Target, I bought the place.”

Dolaway already had four other locations throughout Pennsylvania and Maryland, making MaGerk’s Elon the newest addition.

Drew Patty, a regular from the Town of Elon, has been coming to MaGerk’s since the beginning of the summer and said he enjoys both the food and atmosphere.

“I started coming here at … the end of the student season, so I was here at the beginning of the summer,” Patty said. “And the locals will be up here, and there’s not a local that you can come up here and not sit down and talk to in a matter of minutes.”

The local crowd was one reason Dolaway liked the location so much in the first place.

"My favorite part is the people. The friendliness of the town. Very accommodating and very welcoming, for a Northerner."

“My favorite part is the people,” Dolaway said. “The friendliness of the town. Very accommodating and very welcoming, for a northerner.”

Qawasmy helped open the Horsham, Pennsylvania location and then moved to Elon in 2017 for construction and stayed throughout the opening process.

“I love being a part of Elon. It’s a great school. It’s just great kids that go here, just a really good crowd,” Qawasmy said. “I like that we get to be a part of your experience here at the university.”

Qawasmy said that the first anniversary event will have music and giveaways. It will be just one of several events the restaurant has planned for the upcoming year. In store are Friday night themed DJ sets and new drink specials. And, as a part of a new special the restaurant is debuting this year, the Elon community will have a chance to come in and enjoy their favorite food and drinks after winning games with an added bonus.

Taylor Durham, who works for Elon Athletics, explained the promotion “We Win, You Win.”

“If football wins, if basketball wins a CAA game, or if baseball wins a weekend series, then fans have the opportunity to come in here on the Monday [after], and it is 10% off,” Durham said.

The restaurant will be sponsoring the Elon women’s lacrosse and soccer teams and will participate in “Dine and Donate,” a profit-sharing opportunity for organizations on campus.

Friendly faces all around

These events do not just excite the customers — the staff say they look forward to the parties almost as much as students and locals.

“I am so ready for the Christmas party again,” Dickson said. “We had an ugly sweater contest. I almost won… but I’m ready for this year so I can find the best, ugliest sweater ever, so we can have that fun again.”

As students return to campus, they have staff at MaGerk’s awaiting their arrival. Bartender Ben Kudider, said, “The students have been gone all summer, so I’m really looking forward to them coming back in and keeping me company the rest of the day.”

Qawasmy said she wants students to not only consider MaGerk’s as a restaurant but as a part of their Elon experience.

As year one for MaGerk’s comes to a close, Dolaway said the restaurant is focusing on “ironing out the kinks” in year two. The restaurant has high hopes for the future, including becoming a staple of the student experience and in the Elon community.

“Elon is a funny little mystery that we’re learning while we’ve been here,” Qawasmy said.