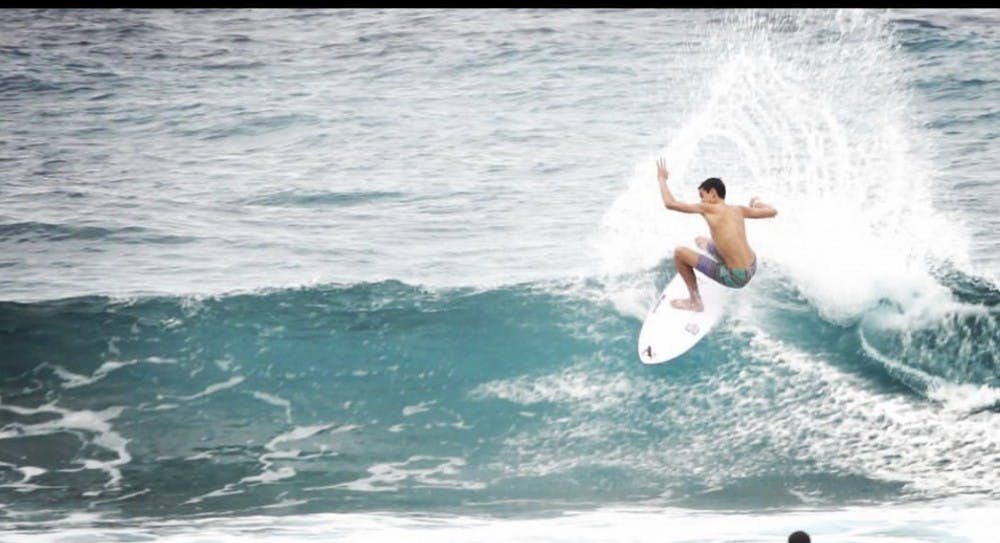 When he’s not out on the surf or in his Danieley Neighborhood flat, Ignacio Alonso is still learning how to navigate college life — just like the other 1,700 freshmen on campus this year.

The freshman from Puerto Rico values his home, culture and Hispanic heritage.

Before coming to college, Alonso visited the continental United States because of his father’s job as the president of his family’s construction business. Alonso has also traveled to Florida, Wyoming and California.

When choosing which school to attend, Alonso’s childhood friend, who recently graduated from Elon University, pushed him to apply.

From the Caribbean to the Carolinas

“He was like, ‘It’s beautiful, you’re going to love it. It has a really good business program.’ Which is what I want to study,” Alonso said, while discussing how he fell in love with Elon. “I was just stunned with the campus — it’s so beautiful. How could you not like it?”

Alonso’s love for business stems from his childhood where he spent his Saturdays visiting his father’s work and helping out. Combined with his love of traveling, Alonso knew working in business was always what he wanted to do.

Alonso expressed the importance of identity and culture, connecting back to his Hispanic roots. Smiling from ear to ear, he spoke proudly of his Hispanic background, explaining how his identity affects him every day.

“I feel like it’s pretty different for people like me,” Alonso said. “Since I’ve been here, I’ve been treated normally. How you treat people will come back to how they will treat you, and so I feel like I’ve got nothing but good people around me.”

According to Alonso, discussions regarding Hispanic history and culture are important to the Elon community.

“Hispanics, we’ve been treated like a little bit of a minority,” Alonso said. “So, to now see that word coming up and having an impact in our culture is amazing to me, and I’m super happy, and it’s motivating me to do better and be a better person.”

He also spoke highly of Elon’s initiative to broadcast Hispanic Heritage Month, saying how he loves that the university is bringing Hispanic culture to life and opening the community up to different traditions.

“I just feel like what we’re doing right now is such a great opportunity to showcase Hispanic culture, how beautiful it is,” Alonso said. “Hispanic culture is so important to me and I love it so much. I’m so blessed to be from Puerto Rico and just have that in me.”

Alonso’s love for Puerto Rico stretches beyond any ocean. His culture remains a large part of his identity — it’s personal.

“It’s the best island ever,” Alonso said. “I feel so proud and honored to have been born in Puerto Rico.”

In addition to his heritage, Alonso also spoke on his identity as a surfer. Since the age of six, he remembers his father taking him down to the beach and pushing him on a board.

“At 13, I got a coach, and that’s when I started hitting off, winning contests and stuff. So that’s where I started noticing that I’m pretty good at this, so let’s keep going,” Alonso said.

Alonso has won numerous surfing competitions internationally as well as in the U.S., including events with the Puerto Rican Surfing Federation, in Europe and most recently in California.

“When I went to California, I was the flag bearer for Puerto Rico, and it was such an honor to carry the flag down the street to the end,” Alonso said. “I stood up on the stage and I was just waving the flag. I was so, so honored and so blessed to represent my beautiful country.”

When out on the waves, his surfboard gliding over the open water, Alonso described the feeling like nothing else on Earth. “You just focus on the waves, on the ocean, just the feeling you get from the ocean, the power — it’s just unbelievable,” he said. “There’s no other feeling in the world like that.”